Blogtour: Going Down by Lady Jaguar 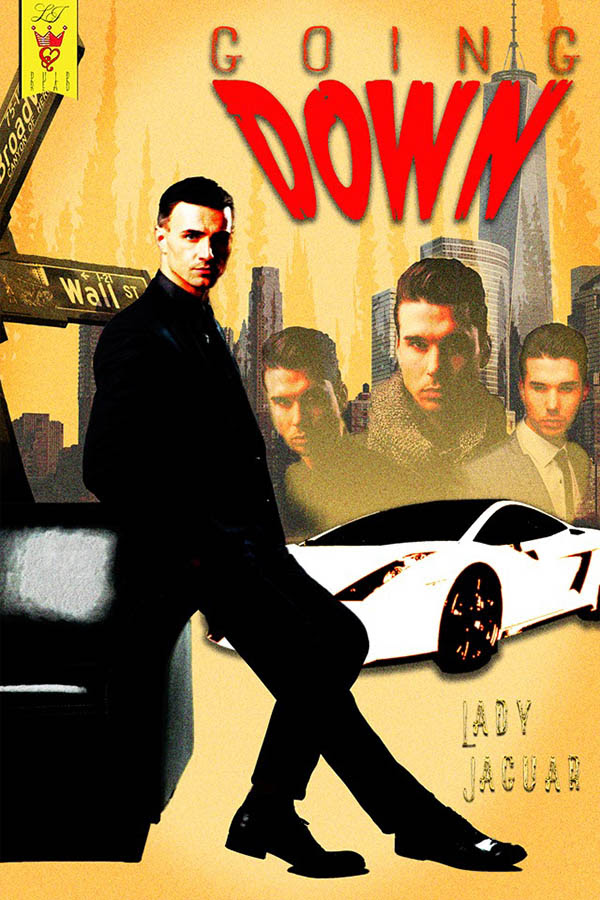 A misunderstanding leads to seduction, then a life-changing job offer…
Tino Santini is calm and decent with a core of steel, qualities he needs when he is offered the role of PA to ferocious CEO, Richard Mason.
The opportunity arises after Tino is trapped with Mason in the office elevator just before Thanksgiving. A bottle of brandy kickstarts a night of scorching sex which does wonders for Tino’s flagging career.
Pansexual multi-millionaire, Richard, has it all; wealth, success, commitment-free sex every time he snaps his fingers, but a former female lover, a New York gangster and a murky past all threaten to destroy his chance of happiness.
Tino gradually learns who his boss really is, whilst willingly keeping him happy both in the bedroom and out of it. Neither of them expect their relationship to be anything other than business, until a personal tragedy means that Richard needs Tino more than ever.For both of them, that first chance meeting is the catalyst for a headlong plunge into sexual adventures, murder and possibly love.
Warnings: one instance of drug use, alcohol use, violence, historical incest query, extreme possessiveness.


Amazon US | Amazon UK | Amazon CAN


Hi everyone, and very many thanks for featuring my book, Going Down, on your blog. It’s lovely to be here! The chapter below is actually pretty special, because it didn’t make it into the book. Sometimes, you need to be disciplined enough to know when to leave things out, so although I love this scene between Richard and Tino, this is the only place you’ll find it. The sexual tension between them is definitely in the book though. I hope you enjoy it!

Tino was greeted with hugs and kisses when he walked into the dance studio on Lexington Avenue. He wasn't the only man there. A variety of genders, of all shapes and sizes did the class, and he felt at home.
He peeled off his tracksuit bottoms and pulled on leg warmers. It was great to be back in dance wear again, even though he looked critically at his body in the tiny shorts and cropped singlet and thought there could be some improvement.
They all padded barefoot to the middle of the floor to warm up. The poles were scattered around them, the idea being they took turns and spotted each other as they practiced each move. There were no mats to land on if they fell, and even a wooden floor could result in bruises if they weren't careful.
They went through the warm up, flexing their hands and feet, preparing their leg muscles. Tino glanced at the glass panels, behind which some of the partners watched. He had lied when he said his boss couldn't observe him. What he had actually meant was, he didn't want him to.
No way in hell.
Fortunately, he wasn't there. Tino didn't think even Richard Mason was that bold, and what the hell would he want to watch Tino doing a pole workout for anyway?


It was time to move to the poles, after watching their tutor show them the move she wanted them to attempt. It was a tricky one, a straddle mount, followed by wrapping one leg around the pole and letting go with both hands.
"Only let go if you feel confident," she yelled above the music. "And spot each other! I don't want anyone landing on their head."
She walked up to Tino. "Be careful, hun. You haven't done it for a couple of weeks. Don't go hell for leather, okay?"
Tino nodded. He waited his turn and it was fun helping the others. Then it was his turn to attempt the move.
The straddle went okay, although it was an effort. He gripped the pole between his thighs and carefully lowered the top half of his body, keeping his hands on the pole.
As he did so, he was aware of a dark shape moving behind the glass.
His boss was staring at him, eyes wide in disbelief.
Tino's leg grip on the pole loosened, and before he knew it, he had slid slowly to the ground, landing in an ungainly heap. The others rushed to help him.
"Omg, are you okay?" The tutor ran to him. "Did you land on your neck, Tino?"
Tino struggled to a sitting position. "I'm fine. I didn't fall, I slid." He was more annoyed than hurt. He looked up at Mason, who was standing with one hand pressed against his lips, trying not to laugh.
Tino stood up and brushed off the helping hands. "Excuse me," he muttered, and marched to the door.
***
Richard watched Tino stomping towards him, fizzing with indignation. He could tell the man was trying to calm himself, but his face was flushed and he radiated mortified indignation.
"Sir, you shouldn't be here." His voice was low and firm.
"I would pay good money to see that again." It was hard not to laugh outright. Tino looked like a very cross kitten, albeit one in adorable shorts and leg warmers.
"Why are you even here? What part of 'no,' don't you get? You realise this is stalking, right? Right?"
"I was curious. That's all. You can't tell me you do pole fitness and not expect me to want to watch."
"So it's my fault? THIS ISN'T NORMAL!" Tino looked around at the others, who were watching curiously.  "I'm sorry, sir, but this is borderline creepy."
Richard winced, knowing he was right. "Too much, right?'
Tino nodded. "Yeah. Just ... tone it down a notch."
But there was something behind his expression that gave Richard a clue he might have been enjoying himself just a tiny bit.
"Fair enough. Say you don't love me being here and I'll leave. I'll leave right now. I promise."
Tino compressed his lips, his hands on his hips. "I hate it." Again, that sparkle.
Richard smiled wryly.  "I didn't mean to upset you, Valentino. Genuinely, I didn't, but I think you're lying."
Tino glanced up at the clock. "I'm missing it. Stay or don't. It's up to you. But if you laugh, I'm going to spit in your cappuccino tomorrow." He flounced back to the studio, giving Richard a divine view of his pert bottom in those outrageously short shorts.
***
Richard hadn't expected the myriad of feelings to assault him. First there had been anger at the attitude Tino had shown him, then guilt because he had been right.
Next came awe at the small man's strength and beauty. Tino was graceful on the pole, sexy and alluring all at once.
And he was perfect. Perfect in every way. Sassy, kind, good-looking, a skilled negotiator, funny with it and hot as hell.
Damn, he didn't need this to happen to him so soon.
Then there was the most terrifying emotion of all; jealousy. A good-looking dancer had side-eyed him before slipping his arm around Tino's waist, and together they moved around the pole in sinuous, perfect unison, almost as if they were engaged in the most intimate of acts. Even as his cock began to stiffen, his hands tensed into fists and he wanted to go in there and prise the two of them apart.
When the dance had finished, he was rigid with arousal and anger. The taller man gave him a sassy look with raised brows before moving away and Tino began dressing, hiding his lovely body in baggy black sweatshirt and sweatpants. He tugged on sneakers and went outside to join Richard.
"You okay, boss? You look pissed."
"I'm fine. Tom will drive you home." On the sidewalk, Richard motioned for his chauffeur and began to stride down the street, knowing Tino was watching him in bewilderment, wondering what he had done wrong.
He hadn't done anything wrong. It was Richard. He had to get away from him. It was so tempting to go back and get in the car with him, but he couldn't. He would say something he regretted. Something he didn't think he could ever say to anyone ever again.


If that was true, he was in real trouble. 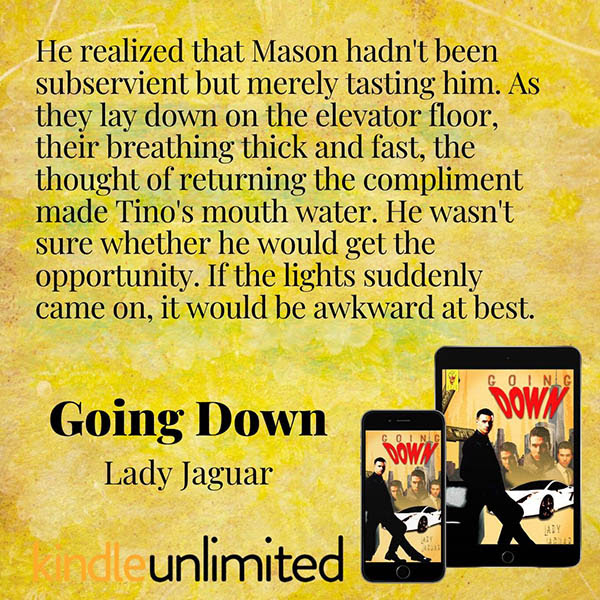 
Lady Jaguar’s first den was in the depths of Archive Of Our Own and Wattpad, where she still writes fan fiction for Holby City, Good Omens and Doctor Who (Eight.)


Now she has ventured out with a story her readers asked her to write and is just about to place it at your feet like a dead rodent. Expect filth, high-octane frolics and every beloved romance trope known to mankind!


Lady Jaguar is on Instagram (when they haven't banned her,) Twitter, and down with the kids at Tumblr.

Lady Jaguar is giving away a $15 Amazon gift card with this tour.