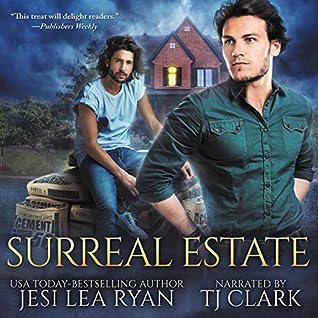 
Sasha Michaels is a psychic with an affinity for houses. And he’s homeless. Go figure. After months of sleeping rough, he stumbles upon an abandoned house, and the lonely place beckons him inside. He’s finally safe . . . until someone comes blundering in to his hideaway.

I often use to preface my reviews of paranormal books with comments like...It's not my favorite genre, as a rule I don't do paranormal... yadda, yadda, yadda. Of course I've also been known to say 'never say never' and it's a good thing because it seems my affinity for this genre is growing.

I actually picked up the book a while ago thinking "Ok, this looks interesting. Sounds like a different take on the whole psychic thing, I'll give it a try the next time I want something different."  Much to my surprise a short time later I was present with the opportunity to listen to the audio book of 'Surreal Estate' with the narration being done by new to me narrator, TJ Clark. It felt like I was being pulled in a certain direction.

The narrator was not the only thing that was new to me for this story, this was also my first Jesi Lea Ryan novel and past experience has taught me that the combination of a new to me author and narrator can be a wonderful thing or something that goes sideways very, very fast. Luckily this one came in much closer to being a wonderful thing than a sideways thing.

TJ Clark provided a very solid and enjoyable narration for this story and I look forward to hearing more from him in future. I found the voices for not just the MCs but the other characters in the story each held their own consistent uniqueness.


'Surreal Estate' is the story of Sasha, a sweet young man whose life hasn't always been easy but somehow Sasha's managed not to let this turn him into someone who's jaded or bitter. In fact all things considered he's kept a fairly good outlook on things in general. He's been living on the streets for a few months now, working at odd jobs for minimum wage when he can and busking in between to add to his income. All Sasha really wants is a place where he can feel safe and call it home.

Then there's Nick. He's older and one would hope wiser and all he wants is to get his house-flipping business back on it's feet and to move on from his failed marriage.

Lastly we have the house. Sasha sees it as someplace where he can be safe and dry and he knows the house doesn't want to be alone anymore...did I mention that Sasha's psychic and has an affinity for houses? I didn't, really? Sorry, my bad...so yeah, Sasha's psychic and his connection isn't with people living or dead...it's with houses. So of course we have a house and Sasha sees it as a home, but Nick sees it as a fresh start for his business...now, if he just had the money to buy it and flip it...enter your friendly neighborhood loan-shark (seriously it's all in the blurb).

For Sasha and Nick made for an interesting couple. Both of these men are strong willed and highly independent in their own way and distinctly different individuals. They're also very drawn to each other or they would be if Nick wasn't gay, but they can be friends right? Refreshingly this story had a nice slow burn and it isn't a 'gay for you' story either and yes, I really liked that fact.

As Nick and Sasha work together both to restore the house and to help each other out of a couple of sticky situations and as Nick's feelings for Sasha grow so does the realization that maybe he's not as straight as he thought he was.

I really enjoyed this story and the the additional characters that the author created to help fill things out. There were some really sweet and sexy moments between the MCs as well as some touches of humor and for me just the right amount of emphasis was given to Sasha's psychic abilities to keep them an active part of the story without overwhelming the romance between him and Nick.

In general the balance and pacing was good and the story was laid out in such a way that it can easily stand on it's own or Ms Ryan has the opportunity to give us more, which  I admit I wouldn't mind if this turned into a series even just a short one with only a couple more stories to give the reader more of Nick and Sasha as their relationship develops both the personal relationship and the professional one that's hinted at as these two men join forces to flip houses and give them a new life...in more ways than one.

An audio book of 'Surreal Estate' was graciously provided by the publisher in exchange for an honest review.

Buylinks are provided as a courtesy and do not constitute and endorsement of or affiliation with this audio book, author or booksellers listed.