Audio Book Review: The Prince and His Bedeviled Bodyguard by Charlie Cochet 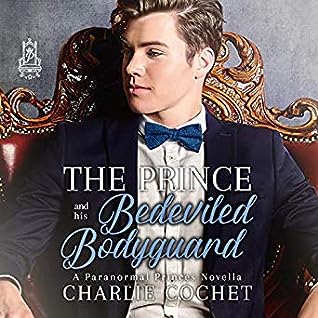 Being a fierce predator—not at all adorable, despite my graceful stature—the last thing I needed was a bodyguard. Especially a wolf shifter, whose presence alone was an insult to my princely principles. As Prince of the Ocelot Shifters, I prided myself on my infallible feline instincts, uncompromisable dignity, and flawless fashion sense. If having a canine follow me around at all times wasn’t bad enough, I now faced the most important moment of my entire life. The time had come to prove I was worthy of my crown. If only I could find a way to get rid of the pesky bodyguard.

When the King of All Shifters asked me to guard Prince Owin, I admit I had no idea what to expect. Cat shifters tend to be a little intense, not to mention kinda cranky. Owin was no exception, though he seemed crankier than most. Being his bodyguard was proving to be one of the greatest challenges of my life—but not nearly as great as convincing him there was something special between us. When Owin is faced with a perilous quest to prove his worth, I was determined to keep him safe, even if the same couldn’t be said of my heart.

Sometimes when you don’t know what you need...life just makes that decision for you. That’s what happened when I got asked if I wanted to review the audio book for ‘The Prince and His Bedeviled Bodyguard’ by Charlie Cochet. I figured why not…author who writes one of my absolute favorite series and a narrator who has never failed to provide me with anything less than an excellent audio experience…how could I lose? So, right there I was off to a good start. But what I didn’t count on was getting a story that was just simply so cute, entertaining and simply adorable that I would basically smile and laugh…in all the best possible ways from start to finish.

Prince Owin is an ocelot shifter…he’s also a little bit vain, somewhat self involved and about to embark on the most important quest of his life to prove himself worthy of the crown for Ocelot shifters and not the slightest bit attracted to the annoying oversized canine shifter that he can’t seem to divest himself of.

Grimmwolf had no idea what he was in for when the King of All Shifters asked him to be Prince Owin’s bodyguard. Piece of cake, right? I mean really how big of a problem can it be for a big alpha werewolf to keep an adorable little Ocelot shifter Prince safe? Even if he is a bit crankier than your average cat shifter.


I was already fairly certain that I was going to get an enjoyable and entertaining story going into this one, but what I didn’t realize was that I’d get a story that would have me smiling and laughing from start to finish.

Had this been a longer story I might have found the constant snipping and snark between these two characters to be less than entertaining but that was not the case here because most of the time I was just too busy enjoying how much Grimm’s calm and unflappable nature seemed to contribute to both Owin’s annoyance and his attraction. Grimm on the other hand sees right through Owin’s vane, arrogant and somewhat self-absorbed persona. Grimm sees the kind and caring person that Owin thinks he’s got so well disguised and Grimm knows that there’s something special between him and Grimm and he also knows that making Owin see this is going to be his biggest challenge.

Greg (Tremblay) Boudreaux is the narrator for this light and entertaining shifter tale and once again he’s done an excellent job of capturing all of the snark and humor contained in this story. I can honestly say that without a doubt this is my most listened to narrator and that’s not allowing for the numerous times I’ve done a replay on an audiobook, whether he’s working under the surname of ‘Tremblay’ or ‘Boudreaux’ I know if Greg (Tremblay) Boudreaux is the narrator, I’m not going to be disappointed with what I hear.

‘The Prince and His Bedeviled Bodyguard’ is the first book in Charlie Cochet’s latest series ‘Paranormal Princes’ and until I listened to this first book in the series, I admit I was seriously considering taking a pass on things since paranormal and shifters aren’t genres high on my reading list but quite honestly I’ve revised that decision and I’m looking forward to finding out what the King of All Shifters has in-store for the rest of his shifter princes.

An audio book of ‘The Prince and His Bedeviled Bodyguard’ was graciously provided by the author in exchange for an honest review.