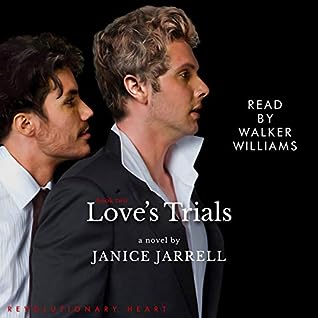 Colin and Joshua faced the most harrowing ordeal of their lives with strength and courage. Believing they'd survived their trial, they looked forward to a future filled with happiness only to discover that the worst was yet to come. Sometimes surviving is the toughest trial of all.

After half a lifetime spent in short-term liaisons that allowed no intimacy, charismatic Irish police officer, Colin Campbell, found the love of his life. Dark-eyed, steady Joshua Abrams burned through Colin’s emotional barriers and taught him to look at life through new eyes, eyes that made room for the love and closeness he had always denied himself. Deeply in love and completely happy, their life together remains idyllic and their fiery passion for each other seems limitless.

They survive the Charlottesville 'Unite the Right' riots, though not without scars. But later that month Colin’s position with the campus police force places him in charge of an informant program designed to crack a dangerous drug ring. Fully aware of the risks, he swears to Joshua that he will oversee the program without becoming directly involved. But Colin's promise shatters when he becomes the only thing standing between a young Nigerian exchange student and a deadly drug lord.

It’s back to the world of academia…

In ‘Love’s Magic’ we were introduced to the characters of Professor Nate Reese, Professor David Gardener, Sergeant Colin Campbell & Dr. Joshua Abram and while we saw Nate and David get their happily ever after we really only saw the beginning of Colin and Joshua’s story, so now here in ‘Love’s Trails’ the reader/listener gets the rest of their story.

For both of these couples getting to their happily ever after has been a hard fought battle, but a well deserved victory. I thoroughly enjoyed “Love’s Magic’ so much so that I very willingly listened to it again before beginning ‘Love’s Trials’ and if anything I have to say I think I may have been a bit stingy with my stars but be that as it may, I’m going to let that rating stand because really 4 stars is not a shabby thing in my humble opinion. Even more surprising to me than realizing that I seem to have enjoyed the first book more than I realized at the time is the fact that for me the second book was just that tiny bit better.

I knew from ‘Love’s Magic’ that I liked Colin and Joshua, which was part of the reason that I was so excited about this audiobook. What I didn’t realized was how much I would connect with this book on an emotional level…more than once I found myself reaching for the tissues.

While ‘Love’s Magic’ addressed the very real issue of violence on today’s college campus’s, ‘Love’s Trials’ takes it a step further when adding in the issues of drugs.  Colin and Joshua each face their own challenges as these two men endeavor to become a committed couple. Colin’s a bit of a commitment phoebe or he was until Joshua entered his life, while Joshua is struggling to adjust to life with a man whose job puts him in harms way on a daily basis. He’s always known what Colin does for a living he’s quickly coming to realize that knowing this and living it are two very different things.

After getting through the Charlottesville ‘Unite the Right’ riots life should have been a breeze for them but when Colin finds himself in charge of an informant program intended to infiltrate a drug ring he promises Joshua that he won’t be in the line of danger and he’s determined to keep his promise until one of the student’s in the program is placed in harms way and suddenly Colin’s the only thing between him and life threatening danger. It’s the aftermath of these events that will test the strength of Colin and Joshua’s commitment to each other.

While I loved David and Nate’s story and I was rooting for them from start to finish in ‘Love’s Magic’ even then I was equally as curious about Colin and Joshua. Here in ‘Love’s Trial’s’ for me it was all about these two men and the struggles they faced. There’s a solid dose of realism here from start to finish as we’re given a story that’s not wrapped up with a pretty pink bow but held together by two men who are committed to each other and sometimes held together by the strength and clearer heads of friends and loved ones who aren’t afraid to step up to help them find their way back to each other.
I honestly can’t even say that their reactions would have been mine…again that’s not how the world works we don’t all react the same way to the same things but for me how these two men reacted to their circumstances was believable…sometimes heartbreakingly so.

I loved that we got a fair but not overwhelming amount of David and Nate. The friendship that began in the first book between these four men has continued and as the story progresses, we get to see it grow even stronger. So often in series we’ll see couples that start as friends but with subsequent stories the friendship seems to diminish and sometimes the characters disappear altogether and that’s fair enough…it happens that way in real life to but what also happens in real life is that friendships grow stronger as times passes and within the pages of this story we are shown this in a way that isn’t often captured in a story. I’m a fan of stories where we get to see the MCs interact with the rest of the world and not just each other for me it just gives everything a more realistic atmosphere.

This story had me hooked from start to finish, but it was the latter part of the story that left me feeling a bit shattered. There was so much there that I was able to relate to. For very different reasons, I know how it feels to suffer a really traumatic injury and the havoc this can play on even the strongest of relationships add to this the fact that we were given things from both men’s perspective and this story for me was taken to a whole new level.

Add in the fact that Walker Williams was once again the narrator for this story and it all combines to create what was for me a supremely awesome listening experience that I know I’ll be repeating in the near future…this one’s definitely recommended.

An audio book of ‘Love’s Trials’ was graciously provided by the author in exchange for an honest review.