Review Tour: The Edge Of The World by Garrett Leigh 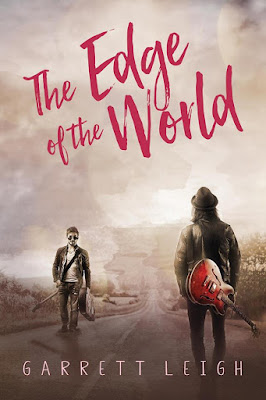 Shay Maloney is living his dream—on tour with his pirate/folk-rock band. But you can’t know where you’re going until you know where you’re from, and that’s where moody filmmaker and researcher Ollie Pietruska comes in.

The band’s management persuades Shay to let a television company film a documentary about his roots beyond his adoptive Irish family, and Ollie comes into his life knowing more about Shay than Shay’s ever known about himself.

But while Ollie holds the key to Shay’s past, he’s also hiding deep scars. Even as the hardships of the tour bring them closer, Ollie’s demons threaten the blossoming romance. They might both reach the breaking point before Ollie realises he’s been standing on the edge of the world for too long, and it’s Shay who holds the key to his future.

A friends-to-lovers, rock star, road-tripping romance, with a guaranteed happily-ever-after.

I don’t think a book blurb has ever hooked me quite as much as this one did. Specifically the second sentence in the blurb which reads…”But you can’t know where you’re going to until you know where you’re from,…” you see when I was a very young girl in grade 8 I had this amazing history teacher and when one of her students expressed that they didn’t see why we had to study history she turned to him and said “how can you know where you’re going to, when you don’t know where you came from?” Those words have stayed with me for over 40 years so when I saw them in the blurb for this story it was a very clear sign that I needed to read this story.
Shay Maloney is the lead singer for the pirate/folk rock band, Smuggler’s Beat. It’s as they begin their tour that Shay’s reminded of the commitment he made to film a documentary about his family roots…not those of his adoptive parents but those of his biological family that Shay is introduced to Ollie Pietruska, the researcher and filmmaker, who’s going to guide him through a past he never knew was his.
While Ollie and Shay are drawn to each other, Ollie’s got his own past to deal with before he can hope to build a future with anyone, much less a successful musician whose past is still a mystery to him.
Amidst the chaos and pandemonium that is the life of a band whose star is on the rise as they begin a tour that’s intended to push them over the top, Shay and Ollie struggle to get to know each other as their feelings deepen and if they could both just be in the same place a the same time things might be a little easier…but, we don’t always get what we want sometimes we just have to work with what we’re given.
I was smitten with both of these men from the very beginning. In spite of his quickly rising star Shay’s character held such a laid back, down to earth almost humble feeling that not liking him really just wasn’t an option. While Ollie seemed to be a little more reserved and shall we say crusty around the edges it wasn’t enough to cover the genuine concern and kindness that he had for others.


I loved the interaction between these two men as they got to know each other the balance of kindness and caring was equally challenged with moments of conflict and angst that held my interest solidly from beginning to end and while the secondary characters and background filled out the story nicely it was always Shay and Ollie who held my interest.
I think the part of the story that I enjoyed the most was whenever Ollie was revealing a part of Shay’s past to him. I was very much reminded of as show that I use to watch on PBS called “Finding Your Roots” and I was fascinated by this show so needless to say I was instinctively drawn to this part of the book as well and I really loved the way the author teased us with Shay’s ancestry laying a breadcrumb trail of information from that randomly wandered through the past and back to the present slowly connecting pieces of a puzzle that the reader may not have even realized was there.


An ARC of “The Edge of the World” was graciously provided by the author in exchange for an honest review.