Release Blitz: Hold Me Up by Colette Davison

Reece has one goal: to compete in the Olympic Games. With the gymnastics World Championships looming, his dream is one step closer to becoming a reality.

When his childhood sweetheart, Alex, walks back into his life unexpectedly, Reece’s world is turned upside down. Alex was the boy who inexplicably pushed him away and broke his heart; the boy he still loves.

When the truth behind their break-up is revealed, Reece wants to hold Alex up and give him the strength to heal.
But can Reece be Alex’s rock, and remain focused on his training, or will his Olympic dreams suffer in the process?

Hold Me Up is a MM second chance romance, with a slow-burn relationship and lots of hurt/comfort. It’s the first in a series of books that follows male artistic gymnasts as they chase gold.


Trigger warnings: Hold Me Up features a character who suffers from anxiety and panic attacks due to a past event that is briefly described.

“Pizza and beer, as requested.”

Alex’s smiled deepened as he stood back, allowing Reece to enter.

“Are we eating at the table, or are we going to be uncouth?” Reece made eyes at the sofa and then frowned playfully. “How can you be uncouth when you can’t be couth?”

“It’s true, though,” Reece pointed out, kicking the door shut behind him. “Just like you can be over- or underwhelmed, but you can’t actually be whelmed. The English language is weird.” Raising the hand carrying the beer, he pointed to the table and then the sofa. “Table or sofa?”

Alex considered the question. The sofa would be far more relaxed, but he wasn’t sure if that was a good thing or not. In just a few days, most of his barriers regarding Reece had crashed down. He was enjoying having Reece back in his life, but he felt like it was for all the wrong reasons.

Reece took the decision out of his hands. “The table is occupied by your laptop. Let’s take the sofa.” He put the pizzas and beer on the coffee table before flopping down on one end of the sofa. He looked up at Alex expectantly. “Are you joining me?”

Alex glanced at the table, wondering if he should offer to move the laptop. It would have taken him two seconds to close the lid and prop it against the wall and only slightly longer to take it back through to his bedroom, but he didn’t want to. Instead, he wandered to the kitchen units and grabbed the bottle opener from the drawer.

“Good call,” Reece said as he pulled two bottles out of the cardboard pack. He held them both while Alex flipped the lids off, and then gave one to Alex. “I got us garlic bread,” he declared. “And I seem to remember that you’re not much of a fan of topping on pizza, so I’ve got a margherita for you and pepperoni for me.” He took a swig of beer before opening up the pizza boxes and handing Alex his. Then he reclaimed the bottle. “We should have a toast.”

Alex raised his eyebrows as Reece lifted his bottle.

“To you. Reporter extraordinaire.”

Alex felt heat creep up into his face. “I don’t—”


“I do,” Reece cut him off. “Like I said earlier, your article was amazing.” He glanced around the room. “You should cut it out and frame it.”

The heat swept up to Alex’s hairline and into his ears. “My boss already did.”

“It’s your first article. It’s a big deal, Alex and you should be bloody proud of yourself.” 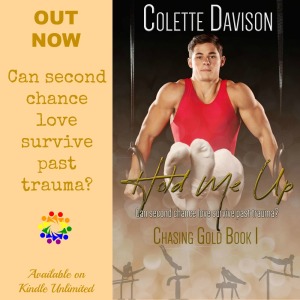 Colette’s personal love story began at university, where she met her future husband. An evening of flirting, in the shadow of Lancaster castle, eventually led to a fairytale wedding.

She’s enjoying her own ‘happy ever after’ in the north of England with her husband, two beautiful children and her writing.

Enter the Rafflecopter Giveaway for a chance to win

Follow the tour and check out the other blog posts here
Posted by Sandra at 12:00 AM

Please welcome Kate Bromley with  Talk Bookish To Me a Harlequin Beach Reads novel Kara Sullivan is definitely not avoiding her deadline. Af...