Blogtour: Passions of a Papillon by Tara Lain 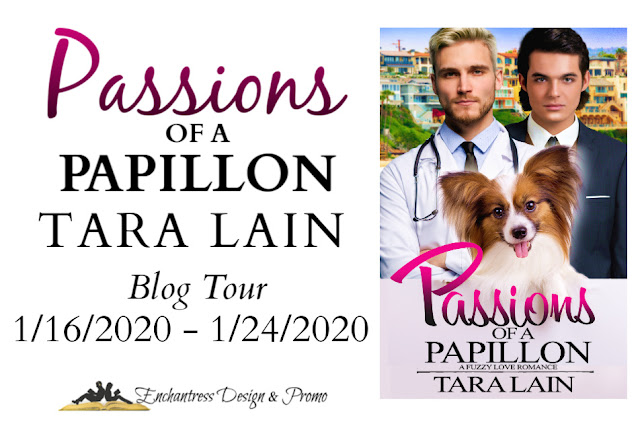 A cool-hearted guy meets a big-eared dog who takes him to a hot vet hiding a dark secret.


Passions of a Papillon
by Tara Lain
Blurb: 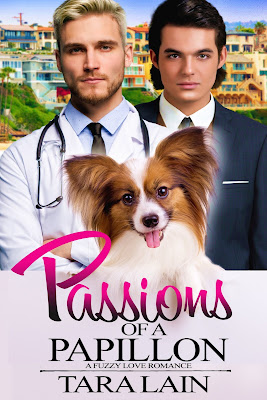 After you’ve sold your soul to the devil, can you renegotiate with a dog?

But then a walk home to his pricey townhouse brings him face-to-ears with a batshit-crazy little dog who just won’t leave him alone. So Finn takes the dog to the local veterinarian to find out how to get her back to her owners.

Emerson “Em” Fairweather sure doesn’t match his stodgy name. Tall, platinum blond, and gorgeous, Em puts the pet in pet ownership. But Em has ugly secrets and Batshit dog is up to her ears in larceny.

Suddenly Finn is the one who needs defending, and he’s faced with a choice between what he thought was important and a whole new batshit-crazy life.

Part of the KU program

Parenting a Papillon? Or is It Vice Versa?

Hi. I’m so happy to be here to celebrate the release of PASSIONS OF A PAPILLON, my first brand new full-length novel to go directly into Kindle Unlimited. This story is about the love between a cool lawyer, a hot veterinarian – and a sassy dog.
The inspiration for the book was my own dog Jolie, a papillon. Have you ever met a “butterfly dog” personally? They’re small (mine weighs 8.5 lbs.), have enormous ears that account for the name Papillon, which means butterfly in French, and are the smartest toy dog.
When we got Jolie, it was on a total whim. We went to a place to get a dog for my then 88-year-old father-in-law. Two hours later, we walked out with Jolie, who then weighed 4 lbs., tucked in my jacket, and my F-i-L never got a dog! LOL. When we got her home, never having planned to get a dog so no research had been done, she was VERY quiet. She was too little to walk yet, so one day shortly after I got her, I was walking and ran into a neighbor who had a male Papillon. I was asking her questions and happened to say, “It’s amazing how quiet she is.” The woman did a double take worthy of a cartoon. She looked at me like I was nuts. Shortly thereafter, Jolie started to feel at home and we found out why the lady laughed in my face. Papillons aren’t “yappy”. They have a big bark for a little dog and they are informative and territorial. They feel it’s their personal responsibility to inform you of every care, squirrel and butterfly that intrudes upon your home. If you yell at her, she looks at you as if you’re crazy. As one meme says, The inventor of the doorbell did not have a Papillon!


They’re also used extensively for agility training. One of the cutest videos ever is of the Papillon that won the Westminster agility trials last year. She was a riot. Look for it.
In my book, the Papillon, Batshit (so called because my hero thinks she’s batshit crazy), changes the lives of both my heroes. She does some pretty wild ass stuff, but I sincerely believe her prowess is well within the capability of one of these dogs.
I hope you love Passions of a Papillon. One advance reviewer said, “This is an absolutely brilliant and funny read, with a crazy loveable dog and stereo typical bad guys, and of course the 2 heroes who fight for good. Tara has written a wonderful book that I know I will be rereading again and again. Warning - Batshit steals every scene as any princess should, and as a cat person it is really saying something that I neeeeeed to have this dog in my life :-) It is a real one sitting read, a little bit of angst, lots of love, some great one liners and as mentioned a batshit crazy dog you just fall in love with.
Wish I could give it more stars.”

Tara Lain believes in happy ever afters – and magic. Same thing. In fact, she says, she doesn’t believe, she knows. Tara shares this passion in her best-selling stories that star her unique, charismatic heroes — the beautiful boys of romance —  and adventurous heroines.

Likely a Gryffindor but possessed of Parseltongue, Tara loves animals of all kinds, diversity, open minds, coconut crunch ice cream from Zoeys, and her readers. She also loves to hear from you.