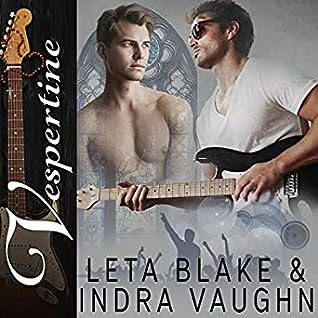 Can a priest and a rock star obey love's call?

Seventeen years ago, Jasper Hendricks and Nicholas Blumfeld's childhood friendship turned into a secret, blissful love affair. They spent several idyllic months together until Jasper's calling to the Catholic priesthood became impossible to ignore. Left floundering, Nicky followed his own trajectory into rock stardom, but he never stopped looking back.

Today, Jasper pushes boundaries as an out, gay priest, working hard to help vulnerable LGBTQ youth. He's determined to bring change to the church and the world. Respected, admired, and settled in his skin, Jasper has long ignored his loneliness.

As Nico Blue, guitarist and songwriter for the band Vespertine, Nicky owns the hearts of millions. He and his bandmates have toured the world, lighting their fans on fire with their music. Numbed by drugs and fueled by simmering anger, Nicky feels completely alone. When Vespertine is forced to get sober, Nicky returns home to where it all started.

Jasper and Nicky's careers have ruled their lives since they parted as teens. When they come face to face again, they must choose between the past's lingering ghosts or the promise of a new future.

I've danced around this one for a while now...

which totally explains why I'm so ridiculously late to the party, but when the opportunity presented itself to review the audio book and I discovered that Michael Ferraiuolo is the narrator and guess who just happens to be on my top 10 list of narrators...well, really who was I to do anything but say yes please.

Ok, so let's start with the elephant in the room...well, actually there's two of them in the room for me and can I just say this room's getting really, really cozy right about now...ok, the first elephant 'catholic priest gone astray' sorry just totally not my thing. Don't get me wrong I'm not a devout Catholic who has some illusion about priest being perfect because it's more like I'm a non-practicing Anglican who knows that...'that dog don't hunt no more'. I think for me it's a case of this is one of those things that happens in real life that, I'd rather not have show up in my fiction and yet here it is and here I am as for elephant #2 let's call a spade a spade because if it's an elephant it's just a teeny tiny little dumbo sized elephant call 'rock star-itis'...that's right I'm not much of a fan of rock star stories, I tend to be really fussy about them...a bit more so than some other sub-genres. It just tends to work out that I either really, really love them or they go horribly wrong for me, so while I do read them they're not usually my subject of choice for reviewing.

But considering that this is a combination of one of my absolute favorite narrators, Michael Ferraiuolo combined with 2 authors who have written one or more books that I'm wildly crazy about I was feeling pretty good about the chances of liking this audio book and while I was pretty damned optimistic about my chances of enjoying this story I have to admit at the end of it even I was surprised by how much I really loved it... truthfully I wanted to simply go back to the beginning and start all over again once I was done.


'Vespertine' drew me in, in ways that only a truly wonderful story can. I loved the characters and not just Jasper and Nicholas...although I did become a devoted fan of them both, but there were a wealth of other characters who added so much color and depth to the story from Jasper and Nicholas's parents to members of Vespertine and the community that Jasper and Nicholas grew up in. Not only did the authors make the events of this book feel grounded in reality but they kept the characters there as well. Nicholas's parents were loving and supportive but at the same time I felt their worries and concern for what was happening in his life and much of the time I was right there with them. Then there was the relationship between Jasper and his mother...far more fragile than that if Nicholas and his parents but every bit as possible and realistic.

Jasper and Nicholas grew up together as best friends until they weren't...until that day that friendship became love and then unexpectedly for Nicholas...Jasper left. He followed his calling to the priesthood and Nicholas turned to his own church...that of sex, drugs and rock & roll until years later, after a stint in rehab Nicholas goes home to try and truly put himself back together and find the man who loved the music before the drugs.

While we get a lot of background about these two men as the story progresses it's woven into the events of the present and in many instances gives clarity to not just what's happened in the past but what it's effect is on events in the present.

'Vespertine' is second chances, starting over, seeking forgiveness, coming home, rediscovering love and very probably a few other things that I've missed. It's a story that leaves you breathless, makes you laugh and cry. it's not about losing faith so much as finding it where you least expect it and yes there's a priest in it but there isn't any preaching.

At just over 14 hours I can't say that this is a quick read or listen if you choose the audio version as I did but what I can say is I loved it and it's definitely going at the top of my very, very short list of 'books involving men-of-faith'.

Once again with the help of her writing partner Indra Vaughn and the incredible narrations of Michael Ferraiuolo, Ms. Blake has taken things that really don't appeal to me, mixed them all together and made something that I loved...it's definitely magic of the best kind.

An audio book of 'Vespertine' was graciously provided by the authors in exchange for an honest review.