Audio Book Review: A Love Song for the Sad Man in the White Coat by Roe Horvat 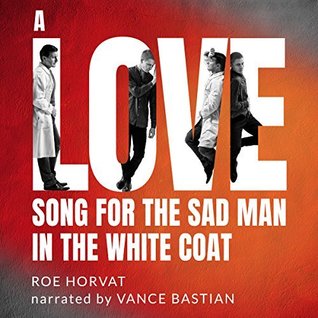 Simon had always expected love to feel different than this. Whether it was his Catholic upbringing or the poetry he'd read - Simon had thought that true love would be uplifting, fulfilling, that it would give a meaning to his loitering, and add joy to his leisure. But not this kind of love. This love was a flesh-eating monster, sharp-clawed and evil-eyed, ravishing his mind with medieval cruelty.

Dr Simon Mráz is a respected specialist and lecturer at the Charles University in Prague. He is a serious man, responsible. His students call him The Cruel Doctor Frost not because he's unkind, but because of his unwavering, ice-cold composure. As a psychiatrist, he values sanity. And sanity can be found in work, restraint, and self-control.

Not many know of that one time in the past when The Cruel Doctor Frost lost his cool. His ill-advised, secret affair with a student left Simon deeply wounded. Since that day, every minute of Simon's life has been a struggle to remain sane, functioning. He's managed so far - as long as he is needed, as long as his work makes a difference, Simon can scrape together enough strength to get up in the morning and run off the nightmares. But when his friends begin drifting away, his beloved protégé becomes independent, and the man who bereaved Simon of his precious sanity might return... Simon's mind and body stop responding to his impressive willpower.

If you're looking for that next happy, happy, joy, joy feel good story...keep going, because...this is not that story.

Thankfully I knew that going into this, so I was prepared and able to appreciate this for what it was...a deeply painful and emotional story not about finding love but about surviving it.

Dr. Simon Mraz keeps the world at a distance. He can cold, aloof even abrasive at times. He's not a happy go luck guy...that's just not who he is or will ever be. But still he has a solid career as a specialist and lecturer at Prague's Charles University and he has friends who can see beneath his icy exterior.

Simon knows he shouldn't get involved with a student but when it comes to Matej, he's drawn to the colorfully dressed, tattooed young student like a moth to a flame and just like that moth when he gets to close, Simon's knows he's going to get burned but still finds himself helpless to resist.


I basically listened to this book in one sitting and I'm sure a lot of people would agree with me when I say that finding nearly 7 hours (6 hrs., 52 min.) to just and listen to an audio book isn't always the easiest thing to do but just like Simon and his attraction to Matej, I found myself helpless to do otherwise. Every time I considered stopping so that I could get some things done I found that leaving whatever I needed to do for another day so that I could listen to..."Just a bit more" became the logical course of action.

While I'm not normally a fan of stories that jump around their timeline the way that this one did. I found I was a little more challenged keeping up with things on the audio version that I would have If I'd been reading the e-book but still I never felt like I'd really lost track of what was going on and when either so a bit of a niggle but for me not a really big deal either.

Surprisingly I never found myself in need of tissues with this story but I think that's mostly because I went into it knowing it was 'that kind of story'. However, what I did find was that most of the time I was left with a dull, empty ache inside of me like something was missing and I realized at the end of it all this was very much because of Simon and how strongly I related to his character, I imagined that to some degree this was how he often felt.

I have to admit that bringing me to tears isn't really a big challenge, however, making me feel such a deep emotional connection that it's like an actual physical ache, as I did with this story is something that rarely happens.

Roe Horvat is quickly becoming a writer who's stories I find to be incredibly compelling whether I'm reading them or listening to them on audio. Once I begin a story, I find that setting it aside is not acceptable. They are for want of better words 'deeply intense, and compelling often times speaking straight to the readers heart'.