ARC Review: Socks For An Otter by Posy Roberts 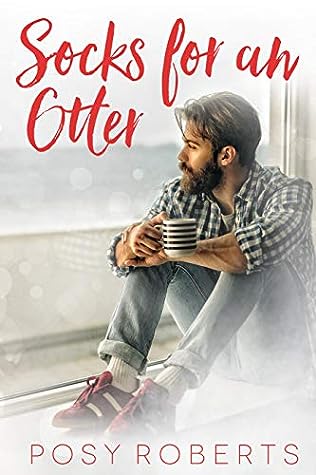 But Sebastian would rather be homeless and hungry than clueless.

On his way to the food pantry, a guy on his cell phone runs into him and triggers his prickly side. As a sign of goodwill, Louis offers to cook for him. But all Sebastian sees is the privilege he used to have.

But it’s been days since he’s had a hot meal. And a blizzard is coming.

I'd almost forgotten how easy to read Posy's books are. And while some of the plot points of this book didn't feel entirely realistic, the writing flowed easily and I was quickly fully immersed in the story.

Sebastian, who now goes by Bash, is 23 and recently homeless, after having lived a life of luxury and privilege in NYC off his parents' money, partying without any responsibilities or direction, and currently in Washington, DC, in hopes of the winter being not quite as brutal as in New York. He has no contact with his parents after his father threw him out and cut him off financially.

Louis is 38 and a successful political influencer on Capital Hill, pan and out, and so very lonely after having lost his wife and unborn son a couple of years ago. To alleviate his loneliness, Louis volunteers at a homeless shelter where he regularly drops off food and other things to help out.

In some areas, the book might feel a little preachy to some readers, but I want to applaud the author for including real life situations and real life problems in her book. Especially the issue around homelessness and shelters and what can happen to people in shelters and how the city will just come in and trash the few belongings Bash and his friends have scrounged up to simply survive without a real roof over their heads and without a job.

The relationship, after an initial hiccup, develops rather fast, and for reasons, Bash keeps staying with Louis. As they spend time together and learn about each other and talk, Bash's prickliness slowly dissipates and Louis' eyes are opened a little more every day. Despite the given ages, Louis on occasion read a little younger than he was supposed to be, and Sebastian, possibly to what he's seen in the past six months, read as a little more mature than his age would indicate. But they fit together really well, and Louis' caring personality, his willingness to accommodate Bash however he can, and his desire to help were endearing. There's a scene around 65% that drips with emotion and is so very intimate that it made my eyes tear up.

Obviously, there is some conflict, and then we get into a situation out of Louis' control, which becomes a big misunderstanding, during which Bash's fears of Louis not being real are confirmed to him (and only him), and... nah, you read this for yourself.

This story is set around the holidays, but it's not a holiday story. It's angsty and emotional and sweet and made me cry, and I think it's definitely worth your time, so check it out.