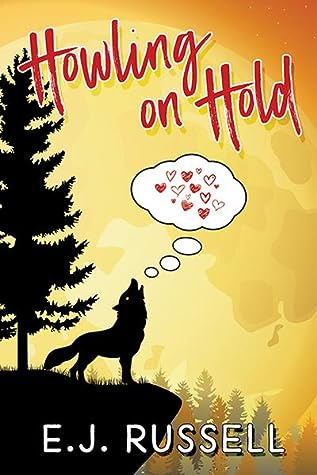 
Chase is RA at the Howling residence affectionately dubbed “the Doghouse,” and he takes his job seriously. So seriously that when he realized he was developing feelings for a resident, he forced himself to keep Tanner at a distance. But now that Tanner’s twenty-one, he’s not Chase’s charge any longer. They could be friends or—if Chase is lucky—something more. At least until they both return to their home packs for good, as tradition demands.

This latest E.J. Russell shifter story was fun, but sadly didn't totally blow my skirt up around my ears for prolonged periods of time.

Tanner had secretly been in love with his RA at the Doghouse, a place where young shifters were sent to be "housebroken" to live in or around the human world, for the past 3 years, but he's just turned 21 and may be sent back to rejoin his pack at any moment.

And Chase had been immediately attracted to Tanner from the very beginning, although he couldn't do anything about it, since Tanner was one of his charges.

But as both guys realized that their window of opportunity to be together was quickly closing, Tanner took a chance and made a move on Chase, only to be confusingly and mortifyingly rebuffed. So he did what wolves do best and ran.

The story then immediately went into a fairly-long forced separation when Tanner went missing, a plot point that I rarely enjoy, with the main question being whether Tanner was in hiding, or had he been taken?

Up until this point, I had thought (and hoped) that this would be a completely stand-alone book; however, Chase needed help, so he went to Quest Investigations, the supernatural detective agency from Russell's "Fae Out of Water" series, which I had read.

After that, the MC's from not only that series were prominently featured, but also MC's from Russell's other "Supernatural Selection" series, which I had *not* read.

Strictly speaking, this book could be considered a standalone story; however, even with me knowing half of the MC's from the previous series', I still felt as if I were missing quite a bit of backstory, and I'm not a fan of feeling lost while reading, so if possible, I would suggest reading both of the previous series' before jumping into this story.

Both Tanner and Chase were both extremely likeable MC's, each with their own past hardships and current dilemmas to overcome.

But the most standout character for me was Jordan, who was as hilarious as he was immature. Picture a naïve 6 y.o. with ADHD, hopped up on sugar, and you'd be in the right ballpark. I'm really hoping that Jordan gets his own book, which I would immediately read without even a moment's hesitation.

The angst was very manageable and the steam was fairly muted, but if you've read both previous series', I'd for sure recommend reading this latest story, which I'd rate at around 3.5 *betrayal-and-mud-monster* stars.

My ARC copy of the book was provided by the publisher through NetGalley in exchange for a fair, unbiased review.