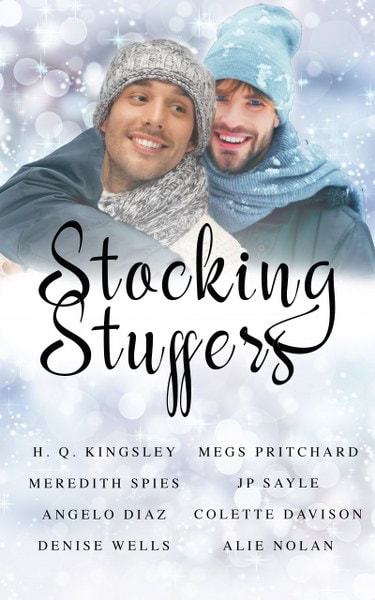 Fix Me Up by H.Q. Kingsley

Nettles Small has retreated to his old family cabin, isolated in the woods for the peace and quiet he needs to write his dissertation. He expects a full two weeks of absolutely no disruptions as he buries himself in research and lab experiments. But when an outdoor experiment goes haywire and his equipment explodes across the mountain, knocking an unsanctioned snowboarder off his board, his plans quickly change.

Ian Montgomery is on his way to the winter olympics. he’s trained his ass off for years and finally made it. But on his way to shred down one of his secret slopes, Ian is unexpectedly knocked off his board by an unknown object and the person who rushes to nurse him back to his feet is someone he had never expected to see again.

Jingle My Bells by Meredith Spies

RowanLess than two weeks till the winter solstice and somehow it's my fault the witches have misplaced their damned bells. If they weren't such jerks about demon-borns being part of the Grand Council and their plans, maybe they wouldn't need to use the stupid things anyway. But until they're ready to admit that without us, there'd be no them, I guess they're out of luck. It's just dirty pool to send Whitaker Frost, scion of the Frost witch clan and sexiest man alive ohmygods to my shop when I've been accused of hiding those damned bells and endangering the witches' annual winter solstice ritual to maintain their powers.

No matter what Rowan thinks, I haven't forgotten our encounter at the summer solstice, and I know for a fact he hasn't. The way he looks at me when he sees me in his shop just before the winter solstice is enough to set me on fire without the help of any of his demon magic. I don't blame him for being hesitant with me—I am a witch, after all, and witches have been doing their damnedest for centuries to keep demon-born out of magical communities and gatherings. I wish he'd understand that I not only want him in the council, but in my bed, my life...

After facing some trouble back home, Declan was more than eager to spend Christmas with his online best friend, Jake, in his hometown of Winterwood. It was everything he’d hoped it would be. The town was friendly, Jake was a ray of sunshine, and the spirit of Christmas was in every corner. What he didn’t expect was the growing connection between him and Jake. The more time Declan spent with Jake, the more the line between friendship and something more started to blur. Maybe the trip to Winterwood was exactly what Declan needed to find himself again. Now, all he wanted for Christmas was to win over Jake’s heart.

Rebel Without A Clause by Denise Wells


I’m the guy who never brings a date to a holiday party. But meeting someone at one is a different story, apparently. The bartender I undressed with my eyes? Whose touch ignited a fire in my soul when his fingers brushed against mine? He’s the one I’m prepared to break all my own rules for.

All Wrapped Up by Megs Pritchard

Crispin Jones had known Roan virtually his whole life, but when his disastrous marriage ended, he began to see Roan in a new light. He wasn’t simply his friend anymore. His feelings had changed to something more.

Christmas was approaching and Crispin had decided that it was the time to tell Roan the truth. The office party seemed the perfect opportunity.

Would Roan accept his declarations of love, or would Crispin’s admission ruin years of friendship between them?

Roman Austin is shy, more than a little geeky, and thinks he’s overweight. Past experience has taught him that he’s better off with his nose buried in a book.

Until the boy who left town years ago returns.

With each new revelation, can Roman see what is right in front of him?

Will past secrets and a meddling brother stop Roman from finding love with the one man he never knew wanted him?

A Christmas Wish is a standalone sweet gay romance, a small-town friendship, and a guaranteed HFN.

One Room at the Inn by Colette Davison

Travel photographer, Ellis, is driving home for Christmas, but a freak snowstorm forces him to seek refuge in the Holiday Inn. He doesn’t expect to meet his two best friends from high school there, or to end up having to share a room with them.

Although eight years apart has changed them all, Ellis realises he still has strong feelings for fit footballer, Zev, and loveable geek, PK.

A game of Never Have I Ever and a bottle of Applejack bourbon leads to revelations about their feelings for one another.

Can anything be the same for these three men after an unexpected night of passion?
One Room at the Inn is a friends to lovers, MMM Christmas romance, with steamy scenes and lots of snow.

Until After Christmas by Alie Nolan

Henry isn't a fan of Christmas and usually spends the holiday alone, wallowing in self-pity. Until he gets drunk with his adorable, awkward co-worker at the office Christmas party and somehow finds himself with Christmas plans for the first time in years.

Callum is tired of his family setting him up with random strangers at Christmas, so when Henry offers to pretend to be his boyfriend for the holiday, it seems like he's found the perfect solution... until real feelings get mixed up into their fake relationship.

**scroll through the slideshow to find out more about the authors!!**