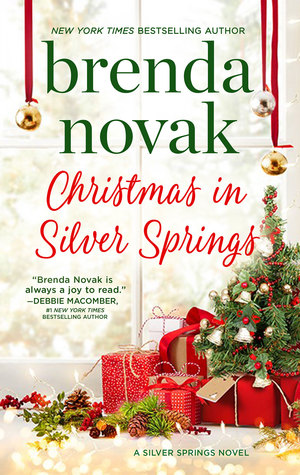 Come home to Silver Springs for the holidays, where broken hearts learn to love again…together.

So much for forever. When Elle Devlin’s rock star husband ditches her on his way to the top, she takes her two daughters to her sister’s place in Silver Springs for the holidays, hoping family can heal her broken heart. But comfort comes in unexpected places when she crosses paths with Tobias Richardson.

The moment Tobias spots Elle, he recognizes a sadness he knows all too well. After spending thirteen years in prison paying for his regretful past, Tobias is ready to make amends, and maybe helping Elle is the way to do it. But offering her a shoulder to cry on ignites a powerful attraction and a desire neither saw coming.

Fearing her reaction, Tobias doesn’t divulge his ex-con status, let alone the shameful details. So when Elle’s ex shows up in Silver Springs and reveals the truth in a bid to win her back, Tobias is sure he’s lost her for good. But maybe this Christmas he’ll receive the forgiveness—and the love—he deserves.


She looked over her shoulder in the direction he’d been looking and lowered her voice. “I see you’ve noticed Harper.”
“Harper?” he repeated.
“Yeah, Harper Devlin—Axel Devlin’s wife. She’s been in here before.”
“Who’s Axel Devlin?”
“Are you kidding me? He’s the lead singer of Pulse. They’re, like…the biggest band on the planet!”
He’d heard of Pulse, was familiar with their music and liked it. He’d also heard the name of the band’s lead singer many times. He’d just never dreamed Willow could be referring to that Axel Devlin—although there was no good reason why she couldn’t be. A lot of celebrities came to artsy, spiritually focused Silver Springs. Quite a few, especially movie people, retired here. And he often interacted with Hudson King, a professional football player, at New Horizons Boys Ranch, where he worked doing grounds and building maintenance. Hudson did a lot to help the troubled teens who attended the boarding school—both the boys’ side and the recently built girls’ school on the same property. He’d donated the money to buy an ice-skating rink both sides could use. “Do they live in the area?”
“No. She and her two kids are staying with her sister for the holidays. I overheard her talking to the owner.”
“She looks a little…” When he let his words trail off, Willow jumped in to finish the sentence.
“Depressed?”
“I was going to say ‘lost.’”
“Probably is. I watched an interview with Axel a few months ago. He said they were splitting up. Maybe that’s why.”
It was none of his business, but Tobias couldn’t help asking, “Did he give a reason?”
She seemed to like that they’d found something to talk about that wasn’t so strained and awkward for her. “Blamed it on the travel. He has to be gone too much. Yada, yada. What else is he going to say? That he’s cheating with a different girl every night?” she added with a laugh.
Tobias felt bad for Harper. It couldn’t be easy to be married to a rock star. She wasn’t that old, likely hadn’t been prepared for that kind of life. If Tobias remembered correctly, Axel was from a small town in Idaho, and he and his band had become famous almost overnight. Now he was sitting on top of the world.


But where did that leave her?

Brenda and her husband, Ted, live in Sacramento and are the proud parents of five children—three girls and two boys. She juggles her writing career with her children’s softball and soccer games, field trips, carpool runs and homework sessions.

When she’s not spending time with her family or writing, Brenda is usually working on her annual fundraiser for diabetes research—an on-line auction held at her website May 1st – May 31st. Her youngest son, Thad, has diabetes, and Brenda is determined to help him and others like him. She also enjoys traveling, watching sporting events and biking--she rides an amazing 20 miles every day!