Blogtour: After Vertigo by Amanda Meuwissen 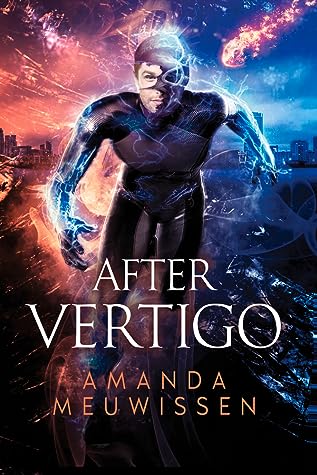 In a flash, the world changed. A solar flare—later dubbed Vertigo—activated the DNA of more than half the world’s people, granting them special abilities. Brilliant scientist Benjamin Krane might be Powerless, but his inventions are the only thing giving the police a fighting chance against super-powered evil. Ben doesn’t have much of a life beyond work, and when he gets wind of a robbery one evening, he decides to test his newest invention personally….

A thief, rogue, and shameless flirt, Grey Miller—aka the Streak—likes shiny things, but he doesn’t hurt people. When Ben catches him—and proposes they team up against the real bad guys—Grey doesn’t know whether it’s the offer or the man he can’t resist. But one thing’s for sure—they’re an ideal match in more ways than one.

With a psychotic supervillain’s catastrophic plan moving forward and everyone he cares about in danger, now might not be the best time for Ben to give in to Grey’s seduction, no matter how tempting. Grey is a man of secrets, and if Ben wants a future with him, he’ll have to learn to trust Grey—and himself.

This week is the release of my 10th M/M romance title, After Vertigo, and while traditionally my books are more focused on a deep plot and romance than just eroticism on the page, I’m certainly no stranger to sex scenes in my stories.
After Vertigo takes an approach I haven’t before though, other than with my one Young Adult novel, Life as a Teenage Vampire, and a smattering of older fanfiction. In my new release, the protagonist, Ben Krane, is a virgin—a forty-year-old virgin to be exact with deep-rooted social anxiety—who lives vicariously through romance novels but gets courted and caught up in adventures with a very flirtatious and bold love interest, Grey Miller.
I think it was more my dabbling in fanfiction on the topic that made the idea of having an older virgin protagonist so appealing. When I’ve written loss of virginity in stories before, I always try to make it something very special, with a caring partner, because not everyone gets to experience that in real life. And readers have told me how hopeful and sweet that is for them, whether they are still a virgin themselves or not, because while the sex can be steamy, the focus is on connection and romance over the heat.
Because of Ben’s virgin status in After Vertigo, the heat of this story comes across more in the beginning through sexual tension between the characters, and then also through the M/F romance novel Ben is reading, lending to fantasies he has but no early sex scenes. The sex in this story is earned, a drawn-out courtship that I hope readers find enthralling and worth the wait.
Virginity can be a touchy subject. Some people are virgins later in life because of choice, sexual preferences, or just circumstance. Part of Ben’s reasoning is his issues with social anxiety and low self-esteem. He doesn’t understand how the mysterious and sensual Grey could possibly find him attractive.
I use a lot of juxtaposition in my writing, and the constant return to Ben reading his romance novel is obviously meant to create parallels with his own sexual experience and desires, helping him get closer to finally asking for what he wants and giving over to his cravings.


As a romance writer, as much as plot and storylines beyond just sex are important to me—such as tackling social anxiety and other deeper issues—how the romance plays out, how sexually charged it is, is always top of mind for me. I loved writing shy, virgin Ben. I also love writing my two amorously charges MCs in Public Enemy. I hope new and loyal readers alike will enjoy giving all the different ways I lead my characters through sexual exploration a chance and check out After Vertigo.

As author of the paranormal romance trilogy The Incubus Saga, the superhero romance duology Lovesick, and much more, Amanda regularly attends local comic conventions for fun and to meet fans, where she will often be seen in costume as one of her favorite fictional characters. She lives in Minneapolis, Minnesota, with her husband, John, and their cat, Helga, and can be found at her website.