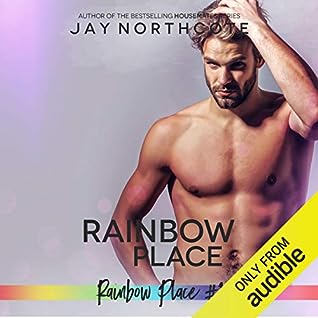 
Can Jason find the courage he needs to be the man Seb deserves?

When Seb Radcliffe relocates to a seaside town in Cornwall, he feels like a fish out of water. He misses queer spaces and the sense of community he enjoyed when he was living in the city, and decides to open an LGBT-friendly cafe-bar.

Jason Dunn is the builder Seb hires to help renovate the rundown space where the cafe will be housed. Jason is also gay, but unlike Seb, he's deep in the closet. He's never had a relationship with another man--only allowing himself the occasional hook up with guys who are prepared to be discreet.

The attraction between the two men is instant and impossible to ignore. But while Seb is out and proud, Jason is terrified of being exposed. With the grand opening of Rainbow Place approaching, tension is growing among some locals who object to Seb's plans. When things escalate, Jason is forced to choose whether to hide in the shadows and let Seb down, or to openly support the man he's fallen so hard for.

This one was totally delightful...

I ended up absolutely loving this story. For me everything was well balanced. There was conflict and tension but not to much...but just enough to keep the interest in the story going.

When Seb Radcliffe moved to a seaside town in Cornwall he never realized how much he was going to miss the sense of LGBTQ community that he had in a larger city and it's this sense of loss and a timely suggestion from a friend that prompts him to open not just a cafe/bar but an LGBTQ friendly cafe/bar that prompts him to undertake a project that not all of the community will welcome with open minds, much less open arms.

Jason Dunn's business definitely needs the infusion of cash that doing the renovations for Seb's venture would bring but what he's not sure of is can he handle working so closely with an out and proud man that he's so strongly attracted to without stepping out the closet that he's built for himself.


The whole relationship dynamic between Seb and Jason held a more realistic feeling than I've encountered in other stories, at times. Seb and Jason's interactions and how they both struggled with Jason's choice to stay in the closet and what that meant for each of them, if they decided to pursue a relationship beyond their business interactions overall just worked.

And then there was the collection of secondary characters...seriously a whole rugby team worth, and then some, not to mention some amazing women!!!! I know I'm a fan of the m/m stories but that doesn't mean I'm not a fan of awesome women. I personally happen to know a few...as in many!!! So when I get the chance to read a story where not all the women are an embarrassment to the gender, I'm all for that added bonus.

Last but not least there's the ending...while I'm not normally a fan of 'the grand gesture' since I find that more often than not, it tends to detract from the story and on occasion has actually spoiled the story for me...so, here's where I would like to tip my hat to the author because for me 'the grand gesture' that Jason made at the end of the story nailed it. It simply worked and worked well. It wasn't anything that I would have expected and somehow it felt like a genuine and sincere thing for him to do. I guess when you make an epically big screw-up, you can get away with an over the top apology.

Oops...sorry just one last little detail. I held out for the audio version and it was narrated by Hamish Long a new to me narrator and from the looks of things the narrator of choice for this series...which can I just say 'makes me happy'. I very much enjoyed the narration and I know that it only made the story that much better for me. I admit it I love a British/Welsh/Irish/Scottish (in other words I love all of those wonderful UK accents) and the characters are much more vivid when I'm listening to a British character speak with a British voice rather than the Canadian voice that my linguistically challenged brain gives to everyone.

An audio book of "Rainbow Place" was graciously provided by the author in exchange for an honest review.

Email ThisBlogThis!Share to TwitterShare to FacebookShare to Pinterest
Labels: 4.5 stars, Audible Studios, British boys, can be read as a standalone, coming out, contemporary, HFN, new series, new to me narrator, small town