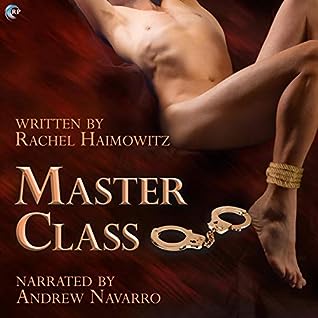 
Broadway darling Nicky Avery is a shooting star by night, but by day he bounces from one heartless one-night stand to the next. A quick flogging, a rough lay, a new whip-hand to manipulate—yet still he yearns for something he cannot even name.

He finds his first true hint of satisfaction in Devon Turner, a self-possessed film star and expert Dom. Devon knows what he wants the moment he sees it, and what he wants is Nicky Avery. Nicky’s never learned to trust and has a nasty habit of topping from the bottom, but he learns fast that in the bedroom, Devon won’t tolerate his actor’s masks.

Nicky's a broken boy, but Devon knows exactly how to put his new sub back together. With patience, care, and all the punishments his little pain slut can handle, Devon breaks Nicky down one scene at a time, revealing a mind that yearns to trust and a heart that hungers for the ecstasy of true submission.

This felt more like a crash course than a class...

At just over 2 hours 'Master Class' has a lot of story packed into it...unfortunately for me it felt like just a bit too much and didn't work as well as it would have, if there'd been a bit more story.

Nicky Avery is the darling of Broadway at night but during the day he's a one bad hook-up after another as he looks for something...but not even he knows what it is.

Devon Turner thinks he knows what Nicky's looking for and while he wants to be the one to fill that need, he's determined that Nicky learns who's going to be the master in their relationship...and unlike his past experiences it's not going to be Nicky. Devon doesn't put up with 'topping from the bottom' so if Nicky wants what Devon has to offer and he's fairly certain he does, he'll need to up his game.


Master Class isn't my first time with a BDSM story but I have to admit it's the first time I've read one where the play between the Master and sub at times feels like it's bordering on abuse and also includes humiliation...no judgement here, ok? It's a thing for some people and that's totally cool, I'm just saying it's not my thing, not that it's good or it's bad...it's just not my thing and that's cool because different strokes for different folks, right? So while, I admit I'm not a fan of these two things and had there been something in the blurb that hinted at one or both of these things being in the story, I very probably would have taken a pass on this one and that's only because I would have known that giving it a glowing review wasn't going to happen...it's why I don't read SciFi or Horror or Historical Romance...they're just not my thing.

However, having said all that quite honestly because of the brevity of the story I decided to give it a go anyways and while there was a couple of things that I didn't like there were other aspects of the story that worked for me. Like the fact that in spite of the fact that the play between Nicky and Devon at times felt abusive and the issue of humiliation, Devon's treatment of Nicky also held an underlying expression of care and concern that spoke to Devon's true feelings towards Nicky.

Andrew Navarro is both a new to me narrator and it seems a new to audiobooks narrator as well and I definitely enjoyed this first foray into the medium by this narrator and look forward to hearing what comes next for him and while the book was only a 3 star listen for me. The narration was definitely stronger and I'd have to put that at a solid 4 stars.

An audiobook of "Master Class" was graciously provided by the author in exchange for an honest review.