ARC Review: A Villain for Christmas (A Snow Globe Christmas #4) by Alice Winters 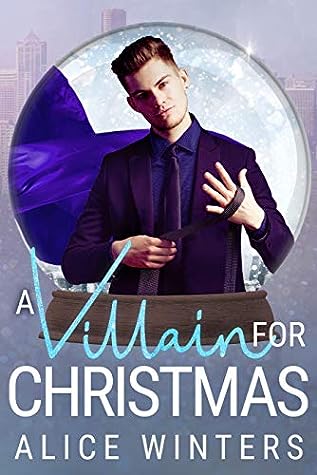 
Despite growing up in a family of villains, I’d rather curl up and read than commit crimes. When I get coerced by my brother into helping him rob a bank, I run into August, my childhood crush—also known as Chrono, the city’s greatest superhero. He’s sexy, sweet, and suddenly he’s asking me to Thanksgiving with his parents. It’s probably because he doesn’t realize that I’m Leviathan, a villain with the power of telekinesis. And I can’t tell him because he’d never forgive me and would stop doing things like cooking for me—wait, maybe that would be a good thing, since he’s a terrible cook. It doesn’t help that my parents think they’re the ultimate villains and won’t stop getting in my way, although they can’t even steal toilet paper without getting caught.

But when real supervillains (not the wannabe kind that I grew up with) start targeting August, I might be forced to show everyone who I truly am: a slightly warped and snarky man who’d really rather read a book than save anything… besides August. I’ll tear this world apart just to get another glimpse of him in those glasses and spandex suit. I’ll do whatever it takes to keep him safe, even though it means exposing my true identity. Luckily, August still cares about me, proving that even a villain and a hero can fall in love. Hopefully, we’ll be able to save the world in time for Christmas.

This ridiculous and snarky holiday novel is 92,000 words and contains a villain turned unlikely hero (even if he’s a manager's worst nightmare), a superhero with a fondness for suckers who absolutely does NOT use his powers to cheat on board games, a hairless cat with an unfortunate name, bumbling family members that try to be evil but are mostly just embarrassing, a snow globe with mysterious powers, betrayal, true love, a risqué Santa suit, and the saltiest chicken ever.

Although this book is part of A Snow Globe Christmas series, it is a complete standalone, and it isn’t a requirement that you read the previous books to follow along. We wish everyone a happy holiday season.

Would-be villain Landon, aka Leviathan, just wanted to read. Full stop. He wanted nothing to do with his family's evil deeds, yet somehow still kept finding himself getting pulled into their wacky, doomed schemes.

As the only major superhero protecting the entire city, August, aka Chrono, had very little choice in his life. He did his job or people died, as simple as that. But he wasn't happy and he wanted more.

Fast forward one failed bank robbery later and August "rescued" Landon as he was fleeing the scene of the crime and injured himself. Yes, the very robbery he'd just helped to commit.

I adored seeing Landon and August's quirky romance bloom, as it was revealed early on that they'd attended middle school together years before, but hadn't been friends at the time.

One of my favorite parts of this story was how both Landon's and August's parents continually ratted out their sons regarding their childhood crushes on the other MC. I was dying laughing so many times.


“You were the cutest little kid back in middle school when Landon was fawning all over you. Then when you became a superhero, Landon made me buy him all the posters of you. He told me it was so he could throw darts at them, but instead of darts, there were tissues lying everywhere.”

“Even when you went through that ugly little gangly stage where your limbs looked like they were too big for your body, Landon was all into it,” she says.

The snark and banter was on par with the MC's from Alice's "Hitman" series, with the humor in this book working *almost* as well for me again here.

Ramping up the humor was Landon's incompetent, well-intentioned family, who I'd describe more as mischievous idiots than actually evil. If they and their friends had a plan, it was pretty much destined to fail. Spectacularly, but with a bit of comic flair.

In addition to the many feels present between the MC's, I also really enjoyed the close, caring relationship between Landon and his brother, Nolan, the only family member who seemed to love Landon for a reason other than his vast powers.

Those close, brotherly feelings played a large role as the story progressed and the evil plan of a group of powerful supervillains was revealed, putting the entire city and people that Landon loved in danger.

We also met August's boss, Valerie, insanely strict and a bit of a ball-buster, and Lex, a superhero from a neighboring city. I liked both of those characters and a closing note at the end of the book indicated that Lex and Nolan "may" get their own book.

There was moderate angst in this one with some steam, but I wouldn't really characterize it as a sexy read, as the humor and action definitely took center stage here.

The story ended with an HEA, cemented further by an old item that August gave Landon at the end of the story, which may have made me swoon just an itty bit. Allegedly.

I'd rate this book at around 4.5 stars and recommend it to fans of Alice's "Hitman" series, as the humor and snark were fairly similar.

An afterward in the book mentions a free Nolan and Lex short follow-up story, which I just got and also can't wait to read. : )