ARC Review : A Scarcity of Condors (Venery #3) by Suanne Laqueur 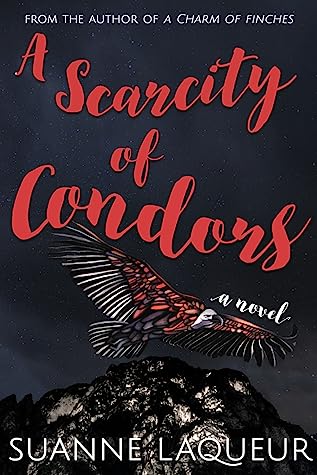 Juleón "Jude" Tholet has survival in his DNA. His father, Cleón, lived through imprisonment and torture during Pinochet's military coup in Chile. His mother, Penny, risked everything to gain her husband's freedom and flee the country with their newborn son. But as a closeted gay teenager growing up in Vancouver, Jude is targeted by a neighborhood bully called El Cóndor, culminating in a vicious hate crime that forces the Tholets to flee their country again.


Jude cautiously rebuilds his life in Seattle, becoming an accomplished pianist, but his his wings have been clipped and he cannot seem to soar in his relationships. Only family remains a constant source of strength and joy, until a DNA test reveals something that shocks all the Tholets: Jude is not their child.

Stunned by the test results, the Tholets must dig into their painful past, re-examine their lives in 1973 Santiago and the events surrounding Jude's birth story. It’s a tale rooted in South America’s Operation Condor. It spreads through Pinochet’s terrifying regime of detention camps, torture, disappeared civilians and stolen children. The journey forces Penny Tholet to confront the gaps in her memory while Cleón must re-live an ordeal he’s long kept hidden away in a secret world. The tale ends with Jude digging through his genetic code in a quest to find his biological parents. Are they alive? Or are they among Los Desaparecidos—the Disappeared Ones?


Suanne Laqueur’s third book in the Venery series explores the desperate acts of love made in times of war, and the many ways family can be defined.

The Venery series is a story-telling about life, survival, resilience, love and family, and it’s written by such a talented author, able to play with words and come up with a symphony of emotions. It’s not easy to explain, it just has to be experienced.

This is all about going back home to your loved ones. Each tale is beautiful, poignant, overwhelming and brings so much reflexion.

The series started with Alex, this little boy back in 1973 in Chile, hiding all alone in a closet for his Mum and Dad to come back home. From then, it’s a journey about life through tales of Alex, Val, Jav, Steff, Geno, and it keeps going on here with Jude, Tej, Penny and Cleon and so many others.


This last part feels like an epilogue, like the Lark and Tholet families are reaching home, with reminiscences of the atrocities of the Pinochet dictatorship and of the concentration camps during WWII, and also homophobia. Yes, humans can be their own worst enemies, the fact that history repeats itself tells it all.

Just a little niggle : at one point, I got distracted with one too many links made, but it’s only a detail.

Once again, a powerful writing delivering a unique and emotional journey.


ARC of “A Scarcity of Condors” was generously provided by the author/publisher in exchange for an honest review.