Entering her second season in the North American Hockey League, Sophie Fournier sets her expectations high. The Concord Condors will make the playoffs for the first time in franchise history. They have the veteran core to do it and the new talent to give them the extra push.
From the beginning, things don’t go according to plan. The season begins without one of their best players, and they lose others to injury and trades as the season progresses. Hockey is a team sport, and Sophie can’t drag them to the playoffs on her own. Is her voice loud enough to convince her team to believe the way she does?

Sophie braves the Manchester airport, her ball cap pulled down low over her eyes so she won’t be recognized. On a different day, she wouldn’t mind being noticed by kids or even their parents. It would be a sign of how quickly hockey has caught on since she made her debut with the Concord Condors last season. Today, though, she’s on a mission.

Theodore Augereau, one of her teammates, is flying in, and she promised him a place to crash during the convention. Fan Fest is Concord’s first event of its kind, a weekend-long celebration of Condors hockey. They’ve planned autograph signings, player panels to answer questions, photo-ops, everything their PR team could think of to drum up support and excitement for the 2012-2013 season.

Sophie’s been in town for a few days helping to prepare, and her teammates are finally trickling in to join her. She spots a familiar figure in the crowd. Teddy has his hat tipped to hide his eyes, same as her, but she’d recognize those scrawny chicken legs anywhere. His goalie pads make him appear twice as large as he is, but in shorts and a T-shirt he looks small.

“You’re too skinny,” she tells him once they’re together. “Don’t you know the off-season is for bulking up?”

Teddy taps her shoulder where her shirt stretches thin to accommodate the breadth of her muscles. “You hit the weight room enough for both of us.”

She grins, pleased he noticed. She spent the summer training, determined to drag Concord into the playoffs this year. The last time she saw Teddy, his shoulders were hunched, the same misery in his eyes reflected in hers because it was locker room cleanout day, and their season ended too early. It’ll be different this year. They’ll have a postseason for the first time in franchise history.

“The guest room is made up for you,” she says as the baggage claim belt begins to move. “I even stocked the fridge.”


“You’re my goalie.” Goalies are meant to be protected—and spoiled—at all costs. Happy goalies make for happy teams. Jakub Lindholm—Lindy—is their starter, but he was Matty’s long before Sophie came to Concord. She knows better than to think she’ll separate their number one goalie from their captain. But she claimed Teddy last year, fair and square.

Teddy finds the black suitcase with a white 30 embroidered on it and hefts it off the belt. “Will you carry my bag?”

He grins as if he’s teasing. Sophie matches his smile. “Sure. I mean, it looks like I’m the only one who worked out this summer.”

“I tried!” Teddy slaps her hands away as she makes a grab for his bag. He lifts it up even though it has perfectly functioning wheels. His muscles flex, but where Sophie is thick and solid, he’s wiry like one of those Gumby figures she played with at her grandparents’ house.

“Men and their egos,” Sophie sighs.

“The summer didn’t make you any nicer.”

“I picked you up from the airport, I’m feeding you, and I’m giving you a place to stay.” She ticks each reason off on her fingers. “But you’re right. I’m not nice at all.”

She laughs as she playfully bumps his shoulder. “I rarely lose.”

“Welcome to my apartment.” Sophie opens the door and ushers Teddy in. Last year, given her status as the first woman in the League, the Condors organization felt it was best for her to live with her general manager and his family rather than with one of her teammates. The Wilcoxes had been kind, but she’s ready for something different.

Sharing an apartment with Elsa will be new, but, more importantly, it’ll make her feel normal. Most players don’t eat dinner with their GM after practice or babysit his kids on their off days. They play video games with their teammates and eat too many tacos. She’s spent so much of her career set apart from what typical hockey players do. She’s excited to finally be like them.

She and Elsa haven’t talked much this summer which means Sophie’s done most of the decorating for their apartment on her own. The living room, the first thing anyone sees when they walk through the door, is all Sophie. The floors are hardwood, which is how the apartment came, but she picked out a slate-gray suede couch. It’s extra wide to accommodate hockey players, and she bought the matching love seat. The smaller couch won’t work for napping, but it’s somewhere for people to sit if they ever have company.

The coffee table is the same one displayed when she went furniture shopping. It’s square, with a glass inlay in the wood. The woman at the store said it’s ideal for displaying magazines without cluttering the top of the table. In deference to the saleswoman, she placed a few copies of After the Whistle inside. Carol Rogers, the reporter for the segment, also publishes weekly articles on the state of the League. At the end of each season, they compile her articles and interview transcripts into one large publication. It’s a look-back on the season, and Sophie can trace the history of the sport she loves by paging through the issues.

“Do you want a snack before your shower or after?” Sophie asks Teddy as she moves into the kitchen. It’s smaller than her parents’ kitchen, but it’s functional. There’s an oven with four cooktops and a fridge with a freezer big enough to store all the ice packs she and Elsa will need.

“The shower isn’t optional?” Teddy grins as he slides his shoes off near the door. “What’re you trying to say about me?”

“You smell like airport. You can’t take forever, we have places to be today.” Matty—Daniel Mathers—offered Lindy’s house for a team get-together before the convention. It’ll be a good opportunity to see everyone before they have to be on their best behavior for the fans. “The guest room is the one at the end of the hall. The bathroom’s the one with the toilet.”

Teddy laughs as he wheels his suitcase down the hall. Sophie pulls two bags of tortilla chips out of her pantry and takes out the salsa dip she made after a frantic Google search last night. It’s a layered dip with shredded buffalo chicken, and she hopes it tastes good. Cooking’s still new to her. At Chilton Academy, all their meals were provided to them and not much has changed since she made the jump to the North American Hockey League. Last year, Amber Wilcox and the team accounted for the majority of her meals.

When she asked Elsa if she has any hidden talents in the kitchen, Elsa sent back a picture of an open-face sandwich with either pickles or cucumbers on top. Sophie reapplied herself to finding easy, but trainer-approved recipes. At least if things become dire, she and Elsa can always order takeout.

“What are these?” Teddy pops back into the kitchen, holding a powder-blue hand towel with a seashell border.

“They came as a set; shower curtain, rug, towels. It means everything matches.”

Teddy stares at the towel. “Seriously?”

“It’s the guest bathroom. There are no seashells in mine.”

“Do they make towels with embroidered hockey pucks or do you have to custom order them?”

“Fuck off and shower.” 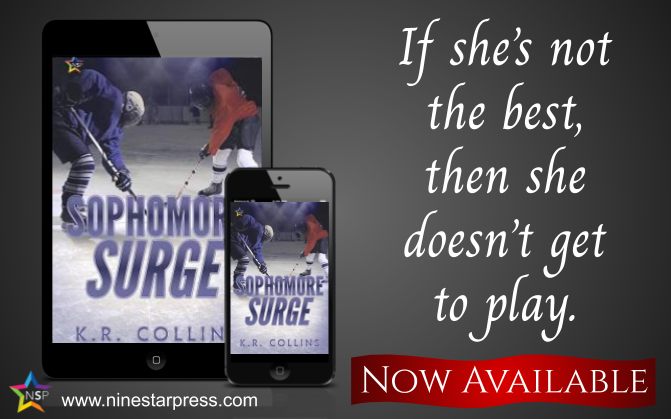 K.R. Collins went to college in Pennsylvania where she learned to write and fell in love with hockey. When she isn’t working or writing, she watches hockey games and claims it’s for research. Follow K.R. on Twitter.