Nothing New Under The Sun

Originality is a very rare commodity. So rare, I’m not sure what I’d do with it if it happened along.

I’ll admit quite cheerfully that I am influenced by what I read and see. Writers aren’t impervious granite blocks, against which culture, literature, films etc crash and break like ocean waves. We’re a bit more absorbent than that. We take all this stuff in, scrunch it all around inside ourselves, season the mix with a bit of “What if…?” and “What about…?” and “Oooh, if I just did that…”, and we synthesise something out of it all that’s our own. Or mostly our own. Our take on things. Our twist.

Those influences permeate everything. Let’s see. What about the baddies in Taking Shield? How influenced were they by what I’ve read and seen? Oh yeah. A lot. I wanted an opponent for humanity that was, rather like the Shadows of Babylon 5, a race of older, inimical beings that had no point of similarity to humans, no sense of even faint kinship that the humans can appeal to. And, also like the Shadows, I wanted them to be few in number and having to use other means of fighting—hence the cyborg drones, which themselves owe something to Imperial Stormtroopers, BSG, innumerable Trek episodes… even Forbidden Planet. They are not, from our point of view, nice aliens at all. Humanity doesn’t even meet one of the Maess until the final book—and then wish they hadn’t made the effort. It doesn’t end well.

Or how about the way spaceships manage to travel faster than light? Babylon 5 had jumpgates into hyperspace, but Star Wars ships just jumped straight in; Star Trek had warp engines as well as sub-light propulsion; Stargate had its wormholes. Everyone has antigravity, but don’t ask me how that works. I can just about get my head around the idea of sending the Gyrfalcon into hyperspace. I don’t want to get hung up on why everyone isn’t floating inside up against the ceilings. I opted for the Star Wars type of entry into hyperspace, btw. Just press a button and off you go. But at the same time the twist I put on it was to make sure that there were limits on when a ship could make the jump. Not in an atmosphere (you’d end up with an impressive fireworks display) and never in battle, where there was too much energy in flux. My reasoning there was I didn’t want ships to escape from danger too easily, because where would the drama be in that?

And then there’s the notion of carrying a single story arc over several volumes with lots of adventure underneath. My biggest influence here was Babylon 5, which did that so beautifully. A great, terrifically under-rated series that is still a joy to watch as the characters grow and change, and the plot unfolds. At least, seasons 1-4 were. After that, it’s a bit messier. If you’ve never watched it, go and give yourself a treat. I learned from Bab5: be sure about where you’re heading, foreshadow where you can, keep a strong hold on your characters, get back on track if you divert on the way.

And from all of those influences, every single one: my characters and their relationships are what matters, and what drive the interest in the story. Bennet and Flynn’s long, frustrating love story is in a long tradition of space opera love stories, with the only faint twist being that they’re two men. But without them, the story would have no heart.

Anyhow, the point I’m trying to make is that the influences are always going to be there. It’s what a writer does with them that matters. 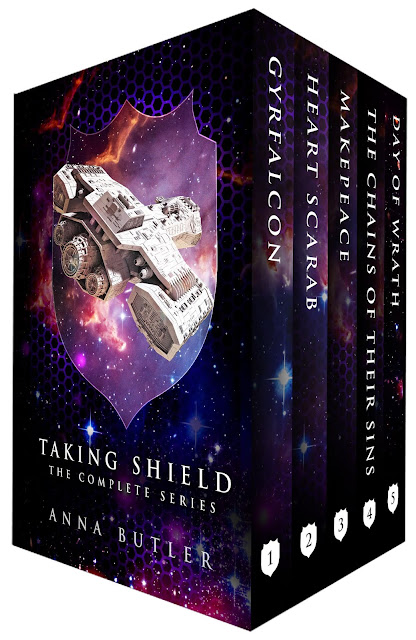 Hate buying books in a series until the whole thing is done? Then check out the Rainbow Award-winning Taking Shield series, just released as an e-book boxed set. Not only do you get the entire series, there’s a very nice saving on the cost of the individual books! Anna’s dropped in today to tell us more.

Earth’s a dead planet, dark for thousands of years; lost for so long no one even knows where the solar system is. Her last known colony, Albion, has grown to be regional galactic power in its own right. But its drive to expand and found colonies of its own has threatened an alien race, the Maess, against whom Albion is now fighting a last-ditch battle for survival in a war that’s dragged on for generations.


Taking Shield charts the missions and adventures of Shield Captain Bennet, scion of a prominent military family. Bennet, also an analyst with the Military Strategy Unit, uncovers crucial data about the Maess to help with the war effort. Against the demands of his family's 'triple goddess' of Duty, Honour and Service, is set Bennet’s relationships with lovers and family—his difficult relationship with his long term partner, Joss; his estrangement from his father, Caeden, the commander of Fleet's First Flotilla; and Fleet Lieutenant Flynn, who, over the course of the series, develops into Bennet’s main love interest.

Over the Taking Shield arc, Bennet will see the extremes to which humanity’s enemies, and his own people, will go to win the war. Some days he isn’t able to tell friend from foe. Some days he doubts everything, including himself, as he strives to ensure Albion’s victory. And some days he isn’t sure, any longer, what victory looks like.

More information and background on the Shield Universe here 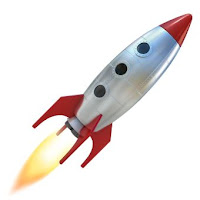 Anna was a communications specialist for many years, working in various UK government departments on everything from marketing employment schemes to organizing conferences for 10,000 civil servants to running an internal TV service. These days, though, she is writing full time. She lives with her husband in a quiet village tucked deep in the Nottinghamshire countryside. She’s supported there by the Deputy Editor, aka Molly the cockerpoo, who is assisted by the lovely Mavis, a Yorkie-Bichon cross with a bark several sizes larger than she is but no opinion whatsoever on the placement of semi-colons.