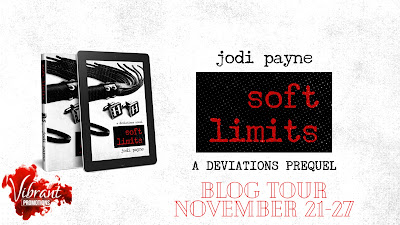 The Beauty of a Beta reader

I’m Jodi Payne and I’m dropping in to tell you about my new book, Soft Limits. Soft Limits is a prequel in the timeline of the Deviations Series that focuses on Bradford’s backstory and the very beginning of his relationship with Nikki. It can be read at any point along the way in the series, or as a stand alone as well. There are no spoilers for the series.

The Deviations Series has been around a long time so there’s not much I can say about it that hasn’t been said. I thought instead that I would tell you a little about writing Soft Limits.

Writing a prequel turned out to be more difficult than I had expected. The story was clear in my head but, as they say, the devil is in the details, and there are many in a five-book series.

Details about Bradford and Nikki themselves, big and small, that had been mentioned throughout the series. Details about Noah and his past before Bradford introduced him to Tobias. Details about the club, its members, the people who work there, the dining room where Bradford typically conducts business. All kinds of small things that readers remember but authors often forget--even as small as how someone takes their coffee.

Some of these things are more important than others, but I didn’t want to contradict something that was actually important.

That’s where my beta readers came in.

I found three that knew the series well, had read it numerous times, and were big fans. I was grateful that they all agreed to help. Their job wasn't to fix typos and grammar, I have editors and proofers for that. They read the book, checked out details for me, and they pointed out errors. But more than that, they made suggestions as to what they felt was missing in the book, or what they felt could be better.

As an author you have to be open to those things. You have to be ready to hear something doesn’t work for a reader (even if it's something you personally love!) and consider whether it’s something you should change. I won’t spoil, but in one case, all three of them told me the same thing about a scene, and fixing it involved a rewrite of an entire chapter. But if three readers independently tell you something is an issue? You listen.

And I can’t tell you how glad I am that I did. They made the book better.

If you get the opportunity to beta for an author, do it. And be honest. The author is counting on your feedback, you’re an important part of the creative process! 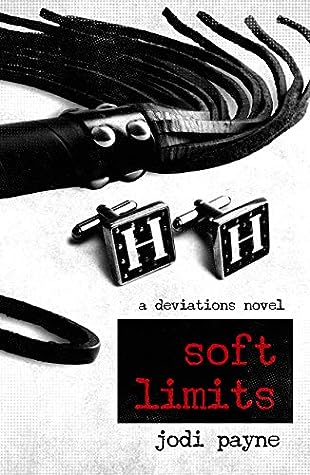 Dominant Bradford’s story is one defined by sudden opportunity, unimaginable heartbreak, and new-found purpose. His calling is to provide a safe and supportive environment for men in the lifestyle. Bringing Doms and subs together is his superpower, yet he feels fated to be alone himself.

In this prequel to the series, you’ll not only discover Bradford's own history, but also how Bradford is first drawn to Nikki, a beautiful and hungry young man living on the streets, and the unexpected ways Bradford grows and changes while helping Nikki understand a world of strange, new desires.

Deviations readers already know outcome of Bradford and Nikki’s journey together. Soft Limits is a deep-dive into Bradford’s story, into what makes the Dom tick, and how he ended up with ownership of the club. It also introduces Nikki, the sub that tests Bradford’s patience, steals his heart, and soothes his soul.


Nikki kept his word and presented himself in Bradford’s office on his break. There was a brief knock at the door before it opened.
“It’s customary to wait to be invited in,” Bradford told the boy evenly, not looking up from his paperwork.
“Oh. Right, sorry.” Nikki came in anyway, closing the door behind him. “You wanted to see me?”
“I did. In the future, if I ask to see you, you should consider yourself excused from whatever you are doing and come right away. Chef will understand.” Bradford glanced up from his papers and looked Nikki in the eyes. “Clear?”
God, the blue.
“Yes. Sorry. Okay.”
“Have a seat.” It was thrilling to have had an excuse to top Nikki just then, even to that small extent, and he felt goose bumps rise on his skin. He stood, intending to resume his casual position on the front of his desk for the rest of their talk.
“Yes, sir.”
The boy’s reply, however, went straight to Bradford’s cock and he sat abruptly, thinking it better that he remain ensconced behind his desk for the moment. He reached for the bottle of water sitting on a ceramic coaster on his desk and took a long sip before relaxing back in his chair. He’d have to do casual indifference from here.
“You have been an excellent employee, Nikki,” Bradford began, finally regaining control over himself.
“Thanks, Bradford.”
Bradford’s lips twitched at the boy’s use of his name. “Yes. Well. You’re welcome.” He shifted in his seat. “I’d like to try to offer someone else a leg up soon, so I think this is an appropriate time for a promotion.”
“A promotion?”

“Yes. I have an opening on my house staff, I was thinking perhaps you might be interested.” He actually did have an opening this time; Timothy was being moved into the dining room. That Timothy’s well-deserved promotion came about at this moment because Bradford needed an opening for Nikki on his house staff was utterly beside the point.
“The staff. Which means…?”
“Oh, you’d be cleaning and restocking the second and third-floor rooms, running errands, keeping the main floor presentable. Assisting our members as needed. At any given time, there are at least two boys on shift, three shifts in a day. Shifts are typically chosen by seniority, so I’m not sure which one you’d be on just yet, but—”
“It is much cooler out here than in the kitchen,” Nikki observed, interrupting.
He raised an eyebrow. “It’s a small raise as well.”
Nikki nodded. “I could maybe meet a few more people.”
“Naturally. You’d meet the rest of the house staff, the waitstaff, my bartenders, and you’d potentially have the opportunity to get to know some of the members, depending on what shift you work. Also, house staff have a uniform.”
He carelessly neglected to mention that the uniform was little more than a custom-fitted leather harness.
Oops.
“Well, okay. It sounds pretty good. Thank you.”
He allowed himself a subtle smile. So far, so good. “You’re welcome.” He was finally able to move out from behind his desk, and he stepped around it. “There is some training involved. Have you met Levi?”
“Not yet.”
“Oh, you’re in for a treat. He’s a…” He stopped himself by pursing his lips together. “He’s very good at what he does.” Perhaps better not to scare the boy off. The uniform might be enough without more information on Levi—his handsome, talented, and submissive daytime manager.
“Okay, great.”
“Wonderful. Welcome to the front of the house. I’m very proud of you.” He offered his hand and Nikki shook it politely. “We’ll get you set up with Levi soon.”
“Sounds good.” Nikki stood up, apparently understanding that the meeting was over. “Later.” He headed for the door.
“Have a nice afternoon,” he replied, and Nikki closed the door behind him with a quiet click. God, how he wanted to get under that boy’s skin. Nikki made his spine itch impatiently and his fingers long for a paddle.
Patience, old boy, he thought. Patience.
If he handled this right, it would be a beautiful thing.

JODI spent too many years in New York and San Francisco stage managing classical plays, edgy fringe work, and the occasional musical. She, therefore, is overdramatic, takes herself way too seriously, and has been known to randomly break out in song. Her men are imperfect but genuine, stubborn but likable, often kinky, and frequently their own worst enemies. They are characters you can’t help but fall in love with while they stumble along the path to their happily ever after.

For those looking to get on her good side, Jodi’s addictions include nonfat lattes, Malbec, and tequila any way you pour it. She’s also obsessed with Shakespeare and Broadway musicals. She can be found wearing sock monkey gloves while typing when it’s cold, and on the beach enjoying the sun and the ocean when it’s hot. When she’s not writing and/or vacuuming sand out of her laptop, Jodi mentors queer youth and will drop everything for live music. Jodi lives near New York City with her beautiful wife, and together they are mothers of dragons (cleverly disguised as children) and slaves to an enormous polydactyl cat.