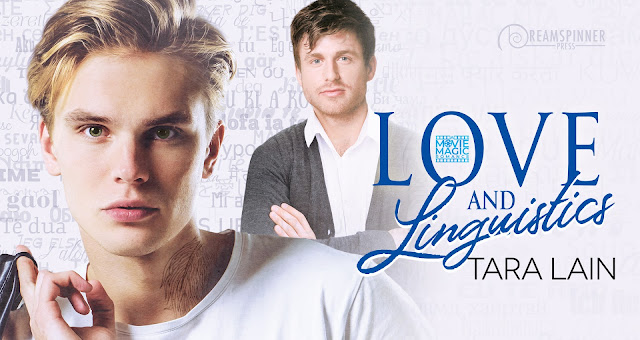 The Surprising Lessons of My Fair Lady

Hi and welcome. I’m Tara Lain and I’m so excited to be introducing you to my new romance, LOVE AND LINGUISTICS. This book is a contemporary, MM homage to My Fair Lady. I decided to write it almost two years ago, but once I plunged in, I discovered so many surprising things that it took a long time to complete the project.
The biggest revelation in the journey began early in my writing process. I’m a “plotser” meaning I start with a basic arc to my story and then “pants” the rest, so many details are added with each scene. I started the book and I noticed that it kept veering from what I thought would be a light and frothy comedy into a far more serious and gritty story. I kept trying to drag it back. Then one day, I was driving in my car and started singing “Wouldn’t It Be Loverly.” Suddenly I realized that I was singing about a person who didn’t have enough food or shelter or anyone to care for them and that wasn’t a happy story. While the musical is very light and charming, when I tried to convert the story to a contemporary romance, it didn’t come out funny. That changed my whole approach to the book.
The other big realization was that Eliza’s father, Doolittle, isn’t a very nice guy. He takes money from Eliza, takes advantage of women, is a drunk, and takes no responsibility for his daughter or any of his actions. So when he shows up in my book, he’s split into two characters – a weak dependent father who keeps El stuck where he is, and a serious bad guy who is the villain of the book.

Another challenge of the book was realizing that we today don’t think of the rigid class system of Henry and Eliza’s world as such a clear or at all acceptable thing. At the same time, we all know that those distinctions exist in our society. I had to find a way to show those distinctions without suggesting that they are still as iron- clad as they were for Eliza.
Another reality, of course, is that My Fair Lady isn’t a romance, so I got to enjoy manifesting the love story between my Henry and the beautiful El.
I hope you love LOVE AND LINGUISTICS. All of its challenges made the final completion of the book even sweeter. Enjoy!

In his neighborhood, El Martin stands out, and that can be life threatening. Against the odds, he’s managed to graduate high school and then master IT. Now he’s desperate to get a good job to free his drunken dad and himself from the control of gang leader M2 and the drugs he sells. But with his piercings and his slang-ridden speech, El looks and sounds like a Bronx gangbanger, and potential employers won’t give him a second look. So when El hears about Henry Fairhaven, PhD, linguistics researcher and wealthy New York socialite, El takes his life in his hands to escape from M2 and ends up sleeping in the stairwell at Henry’s building, hoping to learn how to speak.

To Henry, who wants to prove himself as a scholar and not merely a rich dilettante, El isn’t only the most beautiful man he’s ever seen—he’s also the key to getting a paper published on Henry’s ground-breaking linguistics methods before a competitor beats him to the punch. But Henry doesn’t tell El the truth, and El thinks Henry’s helping him because he cares.

El’s dreams collide with Henry’s ambitions at the elegant Met Gala, where El captivates a prince of Silicon Valley. But the real collision comes when M2 tracks El down and Henry has to choose between the validation he craves and a future with the man he’s come to love.

Tara Lain believes in happy ever afters – and magic. Same thing. In fact, she says, she doesn’t believe, she knows. Tara shares this passion in her best-selling stories that star her unique, charismatic heroes — the beautiful boys of romance — and adventurous heroines. Quarterbacks and cops, werewolves and witches, blue collar or billionaires, Tara’s characters, readers say, love deeply, resolve seemingly insurmountable differences, and ultimately live their lives authentically. After many years living in southern California, Tara, her soulmate honey and her soulmate dog decided they wanted less cars and more trees, prompting a move to Ashland, Oregon where Tara’s creating new stories and loving living in a small town with big culture. Likely a Gryffindor but possessed of Parseltongue, Tara loves animals of all kinds, diversity, open minds, coconut crunch ice cream from Zoeys, and her readers. She also loves to hear from you.