Blogtour: The Lost Souls by K.D. Worth

Please welcome K.D. Worth with


My GRIM LIFE series tells the tale of Kody, a suicidal college student, struggling with his sexuality and his faith in God. Max is the grim reaper sent to take Kody to heaven when Kody tries to kill himself. Instead Max feels a deep, unexpected connection with Kody, and Max saves his life. Now they are both serving as grim reapers, taking souls to heaven.
The third and final book in the series, THE LOST SOULS is a story of redemption,  ultimate forgiveness, trust, and friendship. After suffering unbearable losses, Max and Kody have learned that they are a part of a special prophesy that tells or two souls, twin flames, who will bridge the gap between purgatory and heaven. The daunting task of delivering souls stuck in purgatory to heaven seems more than Max and Kody can handle, but with a little help from their boss and mentor, the wise-cracking archangel of death, Slade, and their group of friends, they will learn the true meaning of trust, faith, forgiveness, and love.


They're young and they love hard, yet they still don't understand that with love comes forgiveness and second chances. And that no one can do everything on their own, and leaders are only as strong as the friends surrounding them. Below is an exclusive excerpt of some of the sweet romance in THE LOST SOULS between Kody and Max, and a sneak peek behind the scenes of their day to day life with their fellow teenage reapers.

Teenage grim reapers Max and Kody are already dealing with being dead… and now they’re expected to save the world.

With the help of their guardian angel, Slade, and each other, Max and Kody have finally discovered the destiny God planned for them—help the lost souls languishing in purgatory back to heaven. But they’re still growing into their roles. Kody, the Healer, struggles to understand the power born of his empathy, and Max’s abilities as Protector suffer because of longing for his best friend… along with Slade’s dire prediction that Max will lose Kody. So many are depending on them, and they’ll have to summon all the love and faith inside them to face a mass school shooting and bring love and hope to those who need it most.

“Do you have our assignment folder yet?” Kody asked me, obviously trying to change the subject.
“Yeah, it’s in our bedroom.”
Tristen pursed his lips and frowned at us. “You know it’s totally not fair that you guys get to share a room.”
“Not fair?” I blustered feeling my temper flare back up—it hadn’t really gone away completely. It wasn’t fair to worry that my boyfriend was going to die every day. It wasn’t fair that undead creatures were searching for him. And it wasn’t fair that I lost my best friend before I could say goodbye.
I opened my mouth to tell Tristen just that, but Kody placed a hand on my knee.
Ever the peacekeeper, Kody chimed in, “I know you’re upset that Heather ended things, but you shouldn’t take your anger out on us, Tristen. We’re your friends.”
Tristen studied his hands and actually looked like he contemplated Kody’s words.
“Why don’t you try talking to her?” Kody suggested.
I, on the other hand, was still annoyed. “Yeah, maybe she doesn’t even want you in her room.”
Tristen’s scowl returned, and he walked off in a huff.
“Max, that was mean,” Kody scolded.
“Yeah, but it’s the truth.”
“And sometimes it’s better to be good than it is to be right. And what you said was probably too close to home.”
“Meaning?”
Kody glanced over his shoulder to where Heather was killing time looking for flour she didn’t need for cupcakes that were already baked. “Tristen was pressuring her for sex, but she wants to wait for marriage. He said she was a prude, so she ended it.”
“What a jerk.”
“He’s heartbroken.”
“Doesn’t mean he has to make rude comments about us,” I returned, feeling only slightly chastised.
Kody conceded my point with a shrug, then went back to piping frosting onto his cupcakes.
The melancholy strum of an unplugged electric guitar filled the common room, and I scowled. For crying out loud, Tristen became a reaper in the nineties. He should’ve grown up a little by now. I knew reapers were perpetually stuck in their death age, but brains and afterlife experiences should count for something. I mean, I wasn’t always going to be jealous about Kody, was I? I had to believe that I’d grow up by the time I was Tristen’s age.
Maybe Tristen should’ve been more respectful of Heather. Then he wouldn’t be in this mess.
I was so glad Kody and I were on the same page about sex. Well, at least we were becoming more comfortable talking about it. Since we’d been sharing a room, we hadn’t gone all the way—I still needed more time. Kody wasn’t exactly small, and I wasn’t exactly sure how to make it fit without it hurting too much. Thankfully, Kody had the patience of Job and a generous heart to go with it. We’d found plenty of other ways to have fun with hands, mouths, and rubbing. Though at first, neither of us had the energy to do more than sleep and cuddle after the whole debacle with Britany and Meegan. But over the last week, our curiosity and desire had returned to normal, and those hands and mouths were finding and giving pleasure whenever they could.
I studied Kody as he hummed a show tune while perfecting his frosting swirls. Physically he was three years older than me—same as Tristan was two years older than Heather. Being older like Tristen, was Kody frustrated by my immaturity and fears about sex?
Or worse, was I too boring for an older man?


Worry swept through me, and I chewed my lower lip. I was seconds away from telling Kody we should talk, when Kody froze and his head shot up.
But he did not look at me, rather, he glanced over at Kelli. He studied her for a moment and then pursed his lips in determination and set down the pastry bag. “Come here, big kitty kitty,” Kody said, picking up Herman.
“It never ceases to amaze me how you can pick up that cat. It claws me every time,” I said.
“He’s a he, not an it. And that’s because he knows you don’t like him,” Kody returned. He cradled the cat over his shoulder like a baby. Herman very contentedly kept his paws on Kody’s shoulder, watching me with those gray eyes as Kody walked over to Kelli.
I flipped Herman the bird, and I would’ve sworn the cat shook its head at me.
Kody readjusted the cat. “Herman’s lonely,” he told Kelli, then gently set him in her lap.
Kelli was surprised but quickly took the cat, her face softening with a smile. “Thanks, Kody.”
With a meow, Herman twirled around, finding a comfy spot on her lap, caressing her with the back of his head. Tristen looked on, his pouty scowl softening and hands stilling on his guitar strings.
I shook my head in wonderment. That cat liked everybody but me. What was up with that?
Kody joined me back in the kitchen, looking extraordinarily pleased with himself.
“Why did you do that?” I whispered, dividing glances between Kody and the new pair.
Kody’s blue eyes seemed to twinkle as he looked back at Kelli and Herman, then to me. “She’s been depressed all day, and I overheard her praying. Herman always makes me feel better, so I figured he’d help her out too.”
I watched the sourpuss girl and the sourpuss cat, amazed at Kody’s empathy. It had shocked me when he told me that he knew when people were praying to God because he could feel it. I don’t know what it meant, but he had a different connection to the heavenly realm than we did. He could also hear his charges’ thoughts, much like the way Slade could hear ours. But one thing was certain: my boyfriend had the most open and loving heart.
I shouldn’t worry if he was unhappy or disappointed in our nighttime private time. He sure hadn’t seemed disappointed when he hissed and came in my hand yesterday. I shuddered at the memory of his flushed cheeks, his brow glistening with sweat, and the tender, sleepy smile he’d given me afterward.
No, Kody and I were good in that department. Maybe too good, if such a thing were possible. And Kody wasn’t Tristen. He would never pressure me or make me uncomfortable. In fact, he was always making sure how or where he touched me was okay.
Feeling silly for worrying, I reached out and pinched him.
“Ouch, what was that for?”
I smiled, swinging my feet a little bit. “Because I love you.”
Kody put a hand on his hip. “You pinched me because you love me?”
“Yep.”
“Okay, then,” he said, reaching out and pinching me right on the nipple.
I jumped. “Ow,” I cried, rubbing myself.
“Ow?” Kody questioned, giving me a sly smile before he returned to his pastry bag of pink frosting. “You know you like it.”
My face flushed with embarrassment, and I looked around, wondering if anyone with super reaper hearing was paying attention and understood what Kody meant.
Seeing my embarrassment, Kody chuckled to himself, because he knew darn well I did like it.


**NOTE** if you or someone you care about is having suicidal thoughts/actions, please call the National Suicide Prevention Lifeline. It is always open 24 hours a day, 1-800-273-8255. 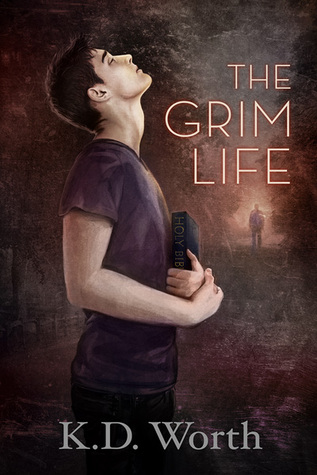 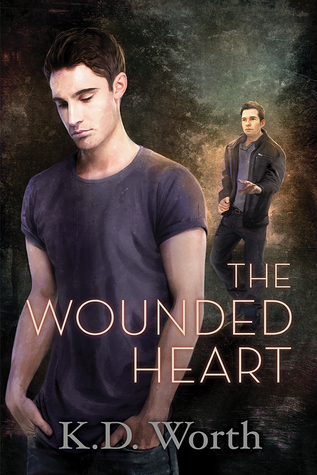 In celebration of the release for The Lost Souls, book 1 in the series, The Grim Life, is currently available for free here, and book 2, The Wounded Heart, is currently $0.99 here. Get them while you can! 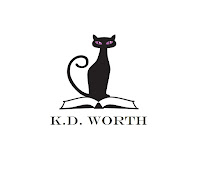 K.D. Worth has always considered herself to have the heart of a teenager with an old soul. When not talking to the characters living in her head, she loves to hang out at her favorite townie bar, then go dancing and partying with her husband and friends. There is always music playing in her home, and if it’s too loud, you’re too old! On the flip side, K.D. enjoys spending time in her vegetable garden, canning the food she grows, and making homemade jams and jellies. She also is known to crochet washcloths and blankets for her closest friends and smiles when they tease her for her “grandmotherly” ways. These two different sides to her personality create a layered tapestry of life experience that brings depth and believability to the characters she writes. She loves to hear from her fans almost as much as she loves her cocker spaniels. You can find her on online here: Facebook │Twitter │Bookbub