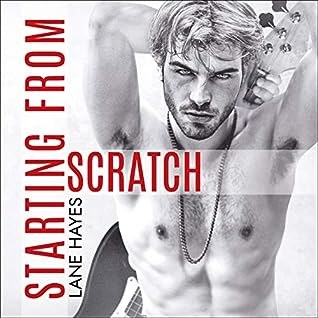 Before I start this review...let's just take a minute...

"Starting From Scratch" is the next installment in the series 'Starting From' by Lane Hayes and for me the second book was a bit more enjoyable than the first one. I'm not saying that the first one was bad, just that for me this one was a little bit better.

We met both Charlie Rourke and Ky Baldwin in "Starting From Zero". Charlie became the manager for the band, Zero. While Ky is the bass player for Zero. Charlie's sure that Ky hates him, but Ky knows that the problem is Charlie hates him...are you seeing the issue here? Two men making assumptions about each other...it's enemies to lovers...it's a match made in heaven or it will be once Ky wins Charlie over.


Charlie's determined to make Zero a success without the help of his successful producer father. He needs to do this on his own merit...he knows his dad loves him and means well but for all of his bravado and confident exterior Charlie needs to show not just the world but himself that he can make be a success based on his own merits.

Ky long ago walked away from his father and learned to make his way in the world without any help from his father and he has no desire to see that change. Ky's a skater boy bassist with a quirky sense of humor and he's silly and annoying and while Charlie's trying not to admit it, in his heart he knows that Ky's perfect.

I loved Charlie and Ky together they worked for me. Their journey from enemies to lovers was filled with banter and snark with passion and heat. These two complimented each other perfectly. Charlie was heat and passion, Ky was cool and calm...except when he and Charlie came together...then everything became scorching hot!

Michael Pauley was once again the narrator for this story and I have to admit I can't really say that the narration worked better for me so much as I listened to this audiobook right after 'Starting From Zero' so I think I'd started to become a bit inured to the things that had previously bothered me. So this combined with the fact that overall I enjoyed this book a bit more than the first one resulted in a better overall rating from me.

An audio book of 'Starting From Scratch' was graciously provided by the author in exchange for an honest review.