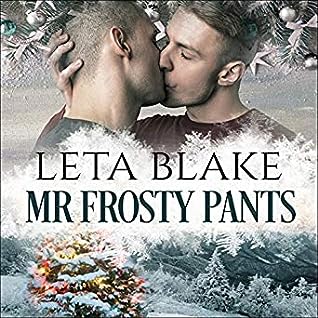 Frosty former friends get a steamy second chance in this Christmas gay romance!

When Casey finally comes face to face with Joel he gets a less than friendly reception... more like a very frosty reminder of how difficult it was to be friends with Joel.

Joel and Casey have a lot to sort out, call it what you will but the miscommunication/ misunderstanding between them pretty much all consuming on both sides and these two have a lot of things to sort out and set to rights before they begin to even try and have a relationship in the here and now. Not only do they need to work things out between them but they've got to deal with Joel's homophobic father and Casey's parents who maybe be ok with the gay but only if it's socially acceptable...a prominent position in society and a big bank account would work nicely, thank you very much.


Joel's not only built walls to protect himself from the world and the hurt that he knows it wants to heap on him, he's built them from ice...hello Mr. Frosty Pants.

Now before I get into the story let's talk about the narrator...John Solo. I've listened to around 15 audio books by this narrator with a varying degrees in regards to how much I enjoyed them and in this case I have to say it was for me one of the better ones. If I was rating just the audio portion I'd have to say this was a 4 for me...a very sold 4. For me, John Solo captured the character and the emotions expressed by both the MCs and their father's bringing to life those moments of conflict between the MCs and their fathers.

While I enjoyed the overall story I found that my anger and frustration with Joel and Casey's parents...in particular the fathers out weighed things and just seemed to detract from the relationship between the two men making it hard for me to really emerge myself into other aspects of the story...although I will admit that when it was Casey and Joel...well let me just say, not even angry fathers could douse that fire. However, while I could appreciate the passion between these two, I also found Joel's hot and cold routine a bit off putting. I realize that it was very much fueled by his general mistrust of the world and the abuse that his father seems to take such pride in heaping on him and when he finally takes his life in hand and does what he needs to do in regards to his relationship with his father...well, can I just say I wanted to stand up and applaud him.

Casey also had his own moment of truth with is father and while mistakes were made by Casey when dealing with his father, they were mistakes resulting from youthful arrogance that most children have in thinking that they know their parents as people far better than they do.

I was surprised that I didn't enjoy this a lot more than I did but after a bit of reflection it came down to the fact that for all the sweetness and steam of Casey and Joel's relationship I got lost in the anger and bitterness of their fathers and to a degree the cold wall that Joel had erected to protect himself from the world...including Casey.

An audio book of "Mr. Frosty Pants" was graciously provided by the author in exchange for an honest review.