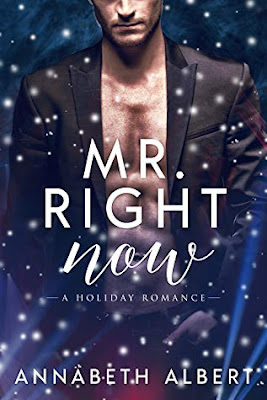 When Russ suffers a Thanksgiving disaster, his gorgeous neighbor Esteban is there to save the day. And after an innocent mix-up leads to the former Hollywood hottie playing the role of Russ’s date, Russ thinks scoring Esteban as his fake boyfriend is a huge win. The newly discharged marine is healing inside and out and could use some holiday cheer.

For his part, Esteban is intrigued by his big, bad neighbor. He likes how his matchmaking cat brings out an unexpected caring side of Russ. Desire flares as the reasons to continue their ruse pile up for both men.

And pretending feels so good. From chocolaty kisses to late night cuddles, their burgeoning friendship is getting cozier and cozier. But as the end date for their little deception looms, all the real feelings they’ve tried to ignore come tumbling in. Each must decide whether they have what it takes to ring in the New Year as a couple.

Russ is my new book boyfriend. He's mine, people, you hear?

I liked Esteban too, but Russ is considerate, kind, empathetic, and determined to make his fake boyfriend see that their pretend relationship is one hundred percent real.

Esteban thinks Russ is on the rebound, but really that's just a lie he tells himself because he's scared. He's been left, so he'd rather not try.

But it's impossible not to fall for Russ, who makes Esteban feel like a superhero.

First there are the cooking lessons, then shopping trips and meals together, and finally there are kisses ... Oh, yeah, the steam will melt the coldest of hearts, especially coupled with the delicious epilogue set a year later.


This is more of a novella, but the characters and relationship are fully developed.

If you're in the mood for some holiday cheer, read this story!