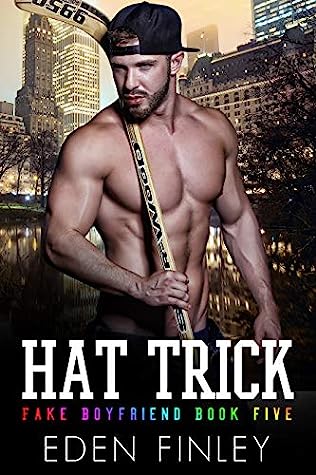 You know what’s not fun? Going on a Fiji vacation with four other couples. Especially when recently single.
What’s even worse is when a past hook-up arrives unannounced.
Not only do we have a history, but he’s ten years younger and a famous rock star. Most importantly, he’s my friend’s little brother.
Being trapped on an island with Jet Jackson is going to be sweet torture because all I want is another chance.
I just don’t think he’s going to give it to me.

You know what’s not fun? Escaping one guy who broke my heart only to run into another.
Being on the road for three years has left me exhausted. The last thing I want is for Caleb ‘Soren’ Sorensen to try for round two.
I can’t fight my draw to him. I’ve never been able to.
I’m suddenly back to being the naïve kid who stupidly lusted after a hockey player.
All I can think is if I let Soren get close, I’ll walk away from this vacation with a double broken heart.

I'm kind of sad that this was the last book in the "Fake Boyfriend" series so I tried to read slowly and make it last longer. I wasn't very effective though. I basically inhaled this story!

Jet is the younger brother of Matt, one of the MCs from "Trick Play", he's a singer and his band is one step away from hitting stardom.

Soren is the hockey player that came out in "Deke" and a close friend of Matt's.

Those two have a common social circle but they also have a secret from three years ago so they've been kind of avoiding each other since then. The story starts with all four couples from the previous books plus Soren taking a two-week vacation on a private island in Fiji. Soren broke up with his longtime boyfriend a few months ago and, even though he knows that was the right move, he's starting to question his decision to go away as the only single one among four couples.

That is until Jet shows up heartbroken after splitting up with his closeted boyfriend. The attraction between them is unmistakable and soon they give in. It's supposed to be just for fun but they can't deny their feelings no matter how many obstacles they have to overcome. And they have enough of those: ex-boyfriends in close proximity, paparazzis following them everywhere, distance.


Both of them are in different phases in their careers, Jet is just starting out a very promising career in music while Soren has to deal with the possibility that he's facing down his last season as a pro hockey player.

The fact that they found each other again at this partucular moment in their lives works wonders for both of them. They support and encourage each other no matter what. I liked that even though they were possessive, there was also trust between them and understanding.

I loved both of these characters, their humor, their chemistry, their personalities. I liked that the ex wasn't a shallow character and that there were so many supporting characters around without any of them stealing the spotlight from Jet and Soren. This was their story and there was no denying that, but we also got to peek into the future of the other four couples and see what their lives are like a few years down the road.

This might have been the last book in the series but it's definitely not the last we'll hear from these characters...

Thanks for stopping by, I hope you'll enjoy reading this book as well!