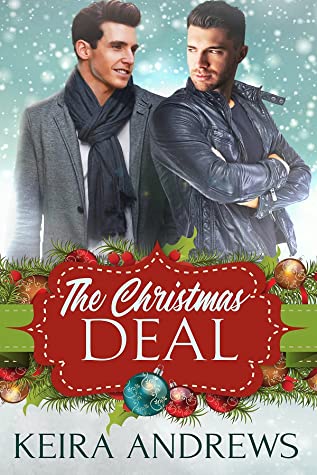 The Christmas Deal is a steamy holiday gay romance novel from Keira Andrews featuring fake boyfriends, bisexual awakening, a clueless single dad with an angry preteen, and of course a happy ending.

Keira Andrews offers us, readers of MM romances, a sweet Christmas story, with low-angst and a “fake boyfriend” trope, involving :
• Logan, gruff but dependable, widowed after a short and loveless marriage and trying hard to find a job,
• Seth, well-mannered, a bit timid, very kind and lonely as his family nastily shunned him and his long-term boyfriend left him,
• and on the side, Connor, Logan’s stepson, an angry teenager, but who could blame him as he has to deal with growing, grieving his mother and having an absent father.

I’m not a real fan of the “fake boyfriend” trope but here, it’s quite cleverly and humorously introduced : I can so imagine how a small white lie could go out of control and I was pleased to watch everybody going with the flow to help one and another.

I enjoyed Seth’s kindness, Logan’s awakening to bisexuality without disrespecting Seth, the familial interactions and all the nice and accepting sentiments from many side-characters.

It’s a sweet Christmas story, even if I admit it was a bit too insta-love and suspend-belief for me to be swooned or left dreamy. But it was a warming read nevertheless, with a very lovely epilogue for these 2 likable MCs.

ARC of “The Christmas Deal” was generously provided by the author/publisher in exchange for an honest review.

Posted by Christelle at 6:00 AM