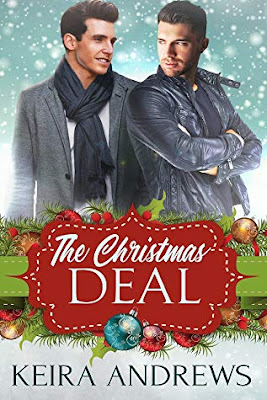 This is how you write a "gay for you" story without denying that bisexuality is a thing. So many GFY stories never so much as utter the word "bi," as if it were some some dirty secret.

Logan thinks of himself as straight, even though he has enjoyed getting off with men in the past. I would say Logan is initially bicurious and heteroromantic. He doesn't deny that getting his dick sucked by a dude is hot, but he can't imagine having a relationship with a man, kissing a man, cuddling with a man.

Until he meets Seth, adorable, slightly geeky, buttoned-up Seth, who wears pressed chinos and loafers during a kitchen renovation project.

Seth and Logan are thrown together by Logan's sister Jenna, who also happens to be Seth's friend and colleague. The new boss is all about families, including "the gays," so Jenna sort of, kind of pretends that Seth and Logan are a couple.


Jenna is great and means well, but a simple lie turns into what Seth and Jenna's coworker calls a "caper." The boss wants to have dinner with Seth and Logan, and they are invited to the company's family retreat.

Yes, this is another fake boyfriend/fiance story, and it's OH, SO GOOD: poignant, gentle, sensual with a touch of hurt-comfort (Logan spirit is broken like his body used to be, and Seth is hurting due to his family's ongoing rejection).

The kid comes first, then sex, then marriage.

Logan's interactions with his stepson Connor were painful to read about, but that's because they felt so real. My daughter is 13, and she too recently lost a parent (her dad). She's not an orphan like Connor, whose bio dad is a neglectful fuckhead, but losing a parent colors everything. Connor lashes out because he's hurting, and Logan doesn't know how to deal with that, so he lashes out right back.

Seth shows Connor how to be patient. Declared dead by his hateful, religious family when he came out, Seth sends his parents and siblings a Christmas card every year, and every year the card is returned to sender. Seth longs for a family of his own. He wants Logan and Connor to stay, even after the holidays are over.

The caper becomes the real deal.

This isn't the most glittery of Christmas books, and I think that's why I liked it so much. The epilogue is better than any present.