ARC Review : Across The Pound (Arizona Raptors #2) by R.J. Scott and V.L. Locey 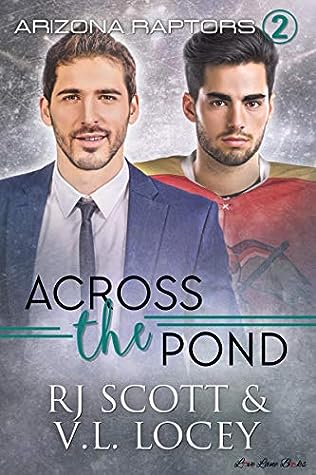 2nd book of the “Arizona Raptors” series following the fate of a Hockey Team and the MM romances of some of the members of the team. Just like with their previous series, “The Harrisburg Railers”, these authors play with the team spirit and friendship, it’s low on angst and with the right amount of sweet for me. Going into these books is like spending a nice evening catching up with good friends.

The team is still internally struggling to be on top again, despite the efforts of the management, of the new coaches and some good promising recruits, one of them being the young Alejandro, very well liked, bitter with the racist comments against his heritage, and deeply into the closet. Here enters Sebastian, flying from England, a good friend of one of the team owners and taking the task of improving the reputation of the Raptors.

The part that kept me the most interested? The slow rebuild of the team and following Henry’s struggle after his accident from book 1. I was less invested on the romance between Alejandro and Sebastian, maybe because it felt a bit like a YA romance, like a lot happened out of page and felt unfinished.


Tepid enthusiasm for this specific romance, but a nice tease for the next gathering featuring Henry. I will be ready.

ARC of “Across the Pound” was generously provided by the author/publisher in exchange for an honest review.