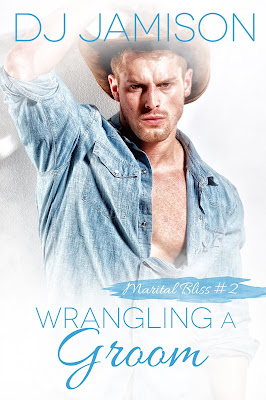 Can two men keep a childhood promise for marital bliss?

Wyatt is overwhelmed after his grandfather dies, leaving him to take over the cattle ranch. The Triple J is floundering, vandals are targeting him, and his first and only love is finally within reach--and still holding a grudge. Wyatt has wanted to marry Diego since they made a childhood pact, but Diego isn't back for their second chance.

When a funeral calls Diego back to Texas, he comes face-to-face with the cowboy who broke his heart. Resentment has burned inside him for years, but his anger wavers as he realizes just how much Wyatt is struggling to keep his head above water. The man he once loved is lonely and burdened, and Diego feels compelled to help him rediscover the strong, capable rancher he knows him to be.Hostility gives way to passion, then friendship as they fall into a rhythm of work and sex. Wyatt has renewed hope he might wrangle the man he wants to be his groom. But Diego has a life waiting for him one thousand miles away, and love may not be enough to prevent history from repeating itself.


Wrangling a Groom is Book 2 of the Marital Bliss series, but it can be read as a standalone.


DJ Jamison is the author of more than a dozen m/m romances, including the Ashe Sentinel series and the Hearts and Health series. She writes a variety of queer characters, from gay to bisexual to asexual, with a focus on telling love stories that are more about common ground than lust at first sight. DJ grew up in the Midwest in a working-class family, and those influences can be found in her writing through characters coping with real-life problems: money troubles, workplace drama, family conflicts and, of course, falling in love. DJ spent more than a decade in the newspaper industry before chasing her first dream to write fiction. She spent a lifetime reading before that, and continues to avidly devour her fellow authors' books each night. She lives in Kansas with her husband, two sons, two fish and, regrettably, one snake.