Battle weary and fearless Centurion Drusus Tuscus has only three more years in the Roman Legions and then he can return home to the mother and young brother he was forced to leave behind seventeen summers ago. Drusus has suffered much during his years in the Legions: defeats, fallen comrades and excruciating wounds, but this time the stakes are so much higher. As he prepares to lead his warriors from the safety of their winter base, across the Rhine into the wilds of Germania, he awaits the arrival of new recruits to bolster his century. With these men he will face the ferocious barbarian tribes, many still chafing under the yoke of Roman subjugation.

When his friend and Optio returns with the new men, two faces in the crowd change everything for Drusus. His brother, long lost to him and now a man, stands before him and he brings with him a friend, a man named Caius. A man who stirs the long dead fires of Drusus’s heart. Two men, neither of whom Drusus is willing to lose to a barbarian blade.

As the campaign begins, whispers of betrayal and rebellion stoke a fear in Drusus, especially as his arrogant commander refuses to take heed of the warnings. As catastrophe stalks their footsteps Drusus must balance his duty to Rome with his love for Caius. He will give everything he has to save his beloved brother, and Caius, the man who has stolen his heart.

Two lives that mean more to Drusus than his own.

Of the many things he would miss about his life, Drusus could not decide which he would yearn for most—his mother’s sweet smiles or his baby brother’s happy babbling. Of course, he loved the land around his family’s farm and would miss the beasts as well as the hard, honest work he toiled at day after day. But his family? Oh gods, how he would miss them.

Only two years ago, having barely reached his eighteenth summer, Drusus had become head of his family after the death of his father. Little Calpurnius, his brother, was barely two summers into his life then, having come along as a great surprise to his parents after many years of failed attempts at a second child. With his loveable nature and adorable face, Calpurnius had easily become the light of the Tuscus family. The time between Calpurnius’s birth and the death of his father had been a happy time for Drusus’s family.

“Drusus, you take too much time,” his mother called.

Agrippina Tuscus was devastated by the loss of her husband, and now, so soon after, she was losing her eldest son to the Emperor’s legions. Drusus had been conscripted. They’d always known it a possibility—more of a certainty—but, nonetheless, Drusus and his mother felt the blow when they finally came for him.

Drusus was not a coward, and he had little fear of battle. He dreaded leaving his mother and little Calpurnius though. They had slaves to tend the farm, and he knew each of them to be loyal. But there was no man of blood here, no Roman man left behind to defend what was left of his family should the need arise. And his family in danger scared him more than any battle could.

“I am taking the land into memory, Mother, so I will not forget what I am fighting for,” he answered as his mother came to stand beside him. Drusus was an unusually tall man who stood above most but towered over his diminutive mother. She looked so fragile beside him, and yet he’d seen her turn into the lioness when the need arose, especially in the care of her children.

“You fight for Roma, son. For Roma’s glory and honour. For Emperor Augustus.”

“I fight for you and Calpurnius too. I fight to keep you safe. I fight for this.” He spread his arms wide and cast them over the panorama of their land: the rolling green hills heavy with wandering sheep, snow-peaked mountains far in the distance, cypress trees swaying gently in the breeze. The wildflowers were due to bloom soon, bringing with them their honeyed fragrance as well as the chirps of a thousand cicadas.

He’d miss it all. The aroma of Cassia’s bread as it baked on the hearth, and even the dry dirt that needed tilling for seeding—and got everywhere—would be missed. The melodious banter of slaves as they worked at the jobs he should be doing were it not for his conscription, the bleat of the sheep, the low calls of the cattle in the field: he’d miss everything. Wherever he went, he’d experience similar sights and sounds, but they wouldn’t be home.

“I would have you stay, Drusus.”

“I cannot, Mother. It is a citizen’s duty to fight with the legions for Roma.” He pressed a tender kiss into her hair, the scent of olive oil and farm life potent in the strands.

“I know, son. I speak selfishly. I will miss you though. It will be many years before you return. Little Cal will not know his brother.” For twenty years, his life would belong to Roma; he’d be nothing more than another body in the cog keeping the Roman war machine turning.

Drusus saw his mother turn her gaze to where Calpurnius was playing with one of his kittens—exactly as he did—at the mention of his beloved brother. He watched the boy’s cherubic face light up in fits of giggles as the kitten rolled playfully all over him. With Cal’s white curls framing his pinked cheeks, he had the look of a god. All who met Calpurnius fell for his charms.

“Pray the gods I make it home before he is sent to the legions.” Drusus flinched at his thoughtless words, knowing they would cause his mother more pain.

As a true Roman woman, his mother ignored his insensitive words, stoically bearing Drusus’s departure instead. “Be safe, Drusus. And do not fear for those of us left behind.”

His mother wrapped her arms around him and held tight. Drusus mirrored her actions, doing his best not to think this may be the last time he held her—saw her. His sweet, kind mother.

He eventually pulled away and took her face in his hands, his gaze intent on her as he did his best to brand her image into his memory. Her dark curls and gentle eyes, the crinkles at the corner of them from years of laughter, her sun-kissed skin. She was still a beauty, even though youth had passed her. He had hopes she would find a good man to marry her one day soon, but he knew his father held her heart even from the afterlife.

Calpurnius was playing with his kitten when Drusus took leave of his mother and went in search of him for their goodbyes. He wasn’t sure Cal comprehended what was happening. The little boy understood Drusus was going away, but the idea of twenty years meant nothing to a child of four. Drusus wondered how long it might take for Cal to stop thinking every day maybe this would be the one his brother returned. How long before Cal forgot him entirely?

“Dru, kitten scratched my arm.” Calpurnius thrust his arm out to show him the offending wound as he approached. His little lip quivered as he looked at the tiny knots of blood left in the wake of the little cat’s sharp claws.

Drusus kneeled before his brother and scooped him into his arms. He kissed the scratch repeatedly until Calpurnius finally giggled and pushed him away.

“Kitten was only playing, Cal. He did not realise how sharp his claws are or how fragile your skin is.”


“Yes, Cal. It is time for me to go.” He pressed a kiss into soft curls. “I want you to remember you are a Roman man. Earn your honour through your duty to Roma and your family. Treat others well, Calpurnius, and you will make our father proud.”

Calpurnius nodded, clearly intuiting this was an important moment but not understanding why. Drusus seared his mind with this image, too, as his little brother watched him with large blue eyes burning with trust and love.

“I will miss you, little one. Always remember somewhere in the world you have a brother who loves you.”

“You come back?” Calpurnius’s tiny hands rested on his cheeks, pushing them and pursing Drusus’s lips as Cal loved to do. Drusus was willing to give anything right then not to have to go. He understood his obligation to Roma, but the ache in his chest was making leaving to complete his duty so difficult. He’d be gone for so long.

“One day, Cal. Give your brother a kiss before I go,” he requested. Calpurnius dutifully delivered a sloppy kiss to each cheek before Drusus leaned forward and blew into the side of his neck, making the noise that so amused the little ones. He set his brother on his feet and patted his bottom. “Off you go now, and find your kitten. Be good to our mother, Cal. Her heart aches today.”

Drusus watched him for a moment before he turned and walked away from everyone and everything he’d ever known without looking back. He feared if he did so his feet would stop carrying him to the road he must now travel. He didn’t know which legion he’d be sent to or what part of the world he’d be shedding blood and tears in. All he knew was the ache in his own chest at leaving was so painful and crippling that surely no wound he might suffer in battle could ever be worse. 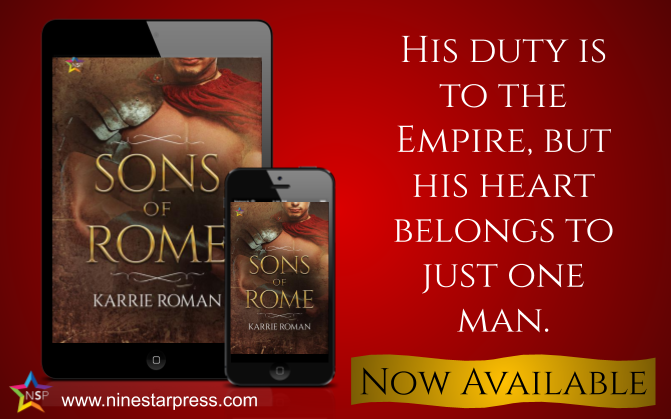 Karrie lives in Australia’s sunshine state with her husband and two sons, though she hates the sun with a passion. She dreams of one day living in the wettest and coldest habitable place she can find. She has been writing stories in her head for years but has finally managed to pull the words out of her head and share them with others. She spends her days trying to type her stories on the computer without disturbing her beloved cat Lu curled up on the keyboard. She probably reads far too much.