Welcome to the blog tour for Suckerpunch, the first book in a new paranormal sports romance series where vampires and other creatures secretly play hockey in the NHL… and fall in love, of course!

Writing a sports romance for non-sports fans is hard. I say this with the full confidence of someone who disliked team sports for most of my life, but who read a LOT of sports romances in that time! With Suckerpunch I’ve tried to find a balance between the paranormal, the romance, and the sports… giving readers a taste of hockey without making this a ‘hockey book’.

But for those who don’t know anything about hockey and are interested to learn more, here’s a quick overview of the sport:


1. The National Hockey League (NHL) is the top men’s professional league in North America. There are currently 31 teams. Don’t ask me which one is my favorite unless you have an hour to spare.

2. Ice hockey is played on a 200-foot rink that looks like this, with goals at each end (behind the light blue paint aka ‘the crease’). The center red line divides the ice, and blue lines show where a player must be onside. (Offside rules are for Hockey 401: Advanced Seminar.)

3. A game consists of three 20-minute periods, with a 17-minute intermission between each period. No, I have no idea why an intermission is 17 minutes.

4. Teams dress 20 players per game. Players can change due to injury, or simply not playing well, but rosters generally stay pretty similar. A game night roster includes 18 skaters, a goalie, and a backup goalie (just in case!).

6. Only 6 players are on the ice at a time for each team: the goalie (of course) and five skaters.

6b. If a team has 6 skaters and a goalie on the ice at the same time, it’s a Too Many Men penalty. The team with Too Much Man sends a player to the penalty box (aka “sin bin” because hockey is precious like that) and is then short a player for two minutes.

6c. Penalties can also be incurred for a variety of other hilarious reasons, like fighting, roughing, hitting someone in the face with your stick, tripping someone, or pretending to be injured when you’re really not. 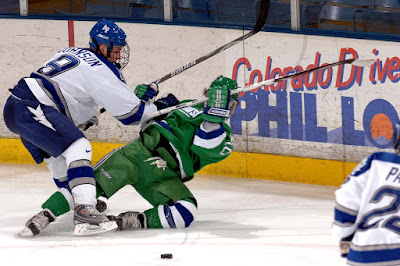 6d. Goaltender interference is for Hockey 501: the seminar so advanced you have to go to graduate school to understand what it means.

7. The five skaters on the ice are made up of 3 forwards—aka offensive players—and 2 defensemen (like Sasha).

8. The point of hockey is to score a goal, which involves putting a tiny black rubber disk into a net, sometimes at 100+ mph. When a team scores a goal, everyone gets hugs! 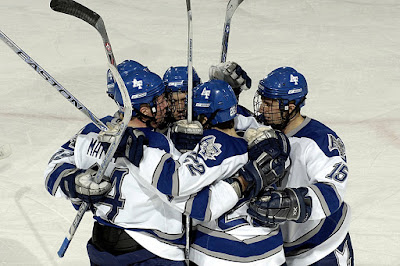 9. A hockey season lasts 82 games over 6 months. And then there are 3 more months of playoffs, in which teams play anywhere from 16 (if they’re magical) to 28 (if they’re really unlucky) additional games.

10. At the end of which one team gets a giant silver drinking vessel called the Stanley Cup. It is the hardest trophy in sports to win. The winning team gets to drink copious amounts of alcohol out of it.

And that’s hockey in 10 basic steps! Now you’re ready to go watch a game. Honestly, you might know more about the sport than the refs do. (Kidding, kidding. Mostly.)

Whether you’re a hockey fan or not, I hope you enjoy reading Suckerpunch and seeing how hockey shapes the world of the Paranormal creatures who live among us.

A rookie goalie with a secret and a handsome yet hotheaded defenseman clash in the locker room and on the ice—but their shared desire to make the playoffs might help them move from enemies to lovers.

When the goalie for the Seattle Cascades hockey team is injured while drunk driving and Alex Fanning is recruited to take his place, Alex thinks his dream has come true. But to hold on to his hopes, he must keep his vampire heritage secret as the sport moves to ban Paranormals. The sexy but infuriating defenseman Sasha Petrov won’t make that easy. The injured goalie was his best friend, and he resents Alex’s presence—maybe even enough to use his bloodline against him.

Tensions mount, but the realization that there’s more to their feelings than animosity hits both men like a punch to the gut. Alex and Sasha’s newfound friendship promises passion, but a shocking betrayal could cost them all the ground they’ve gained.


Elyse is an author and world-traveler, whose unique life experiences have helped to shape the stories that she wants to tell. She writes romances with LGBTQIA+ characters and relationships, and believes that every person deserves a Happily Ever After. When she’s not staring futilely at her computer screen, Elyse spends her time adding stamps to her passport, catching up on her terrifying TBR list, and learning to be a better adult.