a States of Love novella

Thank you for welcoming me to My Fiction Nook. What a great community. I’m honored and thrilled to be here and introduce you to Power Players, my book set in Washington D.C for Dreamspinner Press’s States of Love series.

I was born in D.C. and I’ve seen photos and heard stories of my heroically over-compensating father jumping into the Lincoln Memorial reflecting pool after I’d fallen in. We moved to Boston when I was still a toddler, but maintained a family tradition of Easter egg hunts in the elaborate D.C. gardens of one of my mother’s friends. As a kid, Washington was a magical place. Later, in private school, I had other friends, rich the way Derek’s family is rich in Power Players.

As an adult, my relationship with D.C. has become more realistic. I’ve helped run conferences there for families and educators of children with multiple disabilities. I’ve marched for a variety of causes. My favorite Gay Pride was in the capital and running into high school friends I didn’t know were gay while 4 Non Blondes sang What’s Going On live.

Later, working for an organization for foster youth and another for homeless families, I connected with colleagues like Jeffrey in Power Players.

Would Jeffrey and Derek ever meet? Sure. Cities are places of extremes. Of course, some people chose to not to venture beyond their neighborhood. (Such as the Meals on Wheels driver I recently met who for thirty years has brought daily meals to struggling elders but who herself has never been downtown. Ever. “I don’t do that,” she said, pointing at a high-rise visible from where we were standing and only a fifteen-minute drive away. “My daughters did when they were younger and they say I’m not missing anything. I’m fine.”)

But Jeffrey and Derek are committed to knowing the city and giving back in their own ways. Their vision is broad. Of course, they’d run across each other. Dreamers and builders, they’d be up to the challenge of making a life together. 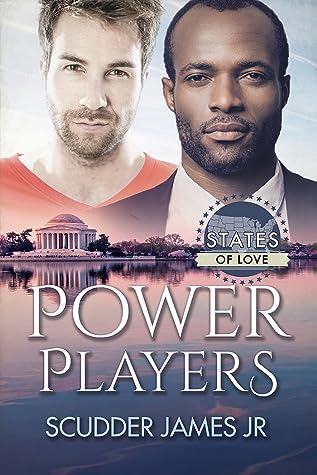 Jeffrey knows the underbelly of Washington, DC, well. Once homeless, he’s now the director of a massive coalition of shelters. The last person he’s interested in meeting is wealth consultant Derk. T. Hinsdale III, another slick-talking, privileged jerk. Jeffrey has had enough of those.

But Derek’s latest project could impact Jeffrey’s organization – with a multimillion-dollar gift awarded at a special dinner and ceremony. Jeffrey and Derek seem so different, but in their convictions, they find common ground, and the heat they call up in each other can’t be ignored. can they salvage a disastrous evening and a painful reminder of Jeffrey’s past?


Where I grew up wasn’t the toughest of DC’s tough, but twenty years ago, violence had been my fear, not gentrification. When Mom died it sucked, until I left at age fifteen, never wanting to see my father or Columbia Heights again. Eddie changed all that. He taught me love. No, he wasn’t my first boyfriend. Not exactly, well, no, not at all because his heart and all that always belonged to the ladies, but eventually he introduced me to other guys who liked guys the same way I did. In truth, he introduced me to myself. And to the future. When I was a homeless fifteen-year-old, he introduced me to his family, and I shared a room with him for the rest of high school. He also introduced me to people who helped get me to college, and he taught me how to give back. Seriously, he saved me. I could say Eddie knew what was best for me. So why, decades later, was he trying to introduce me to exactly the sort of guy he knew I hated to be around.

Derek T. Hinsdale III? Just the name, and Eddie should have known better. Slick DC wealth consultant? What the hell was a wealth consultant anyway? Clearly a job for a clueless guy who thought being surrounded by money was normal. Who cared if he bankrolled some of the best political and philanthropic causes? Who cared if the work he supported impacted not just DC but the whole country? Yes, I’d seen his name on donor lists, and yes, he supported good work and could be a good guy, but I wasn’t interested in someone from the stratosphere. There were enough guys around. Couldn’t Eddie have suggested someone who breathed my kind of air? How could he not understand that Derek Hinsdale was not someone I wanted to be set up with?


I believe happily-ever-after begins today. Junior high was terrible, boarding school better, and college the place where I met the guy I married. I started working in finance because I thought I was supposed to, but quickly left for an ideal job helping refugees. I have since become a counselor, teacher and fundraiser. After Chicago, Japan, London, and Seattle, I’m back in Boston where it all started. My favorite place to write has a harbor view of two colonial ships.

I’m also thrilled that my short LGBTQ films have shown around the world in places as unexpected as Alabama and East Africa. Twenty years ago, I was diagnosed with a neurological disease that doctors are bewildered has disappeared. I’m an avid meditator and passionate about appreciating every moment.

One of my favorite mornings has been waking up on a boat in Patagonia with my perfectly imperfect partner and hiking an island of 120,000 penguins.