Second chance appeal
Writing a second chance romance can be a double-edged blade, on one hand the heroes already know each other, and on the other they already know each other and broke up for a reason. Care has to be taken when figuring out why they broke up, because if the reason was too bad they are never going to look lustily at each other again. And if they were meant to be, why didn’t they fight for the relationship back then?
In Lucifer’s Litigator the heroes are getting their second chance in their early forties. They dated in their last year of high school when only one of them was comfortable in his skin and the other one was up to his eyeballs in denial. At eighteen, it’s very easy to make mistakes and push the wrong people away while trying to figure yourself out.
I also thought it would be fun to show some pieces of Will and Tom’s relationship when they were eighteen and weave it into the story as they worked their way back together battling demons for Will’s soul (they have to really want to be together this time around).
Most of us don’t get do overs. The one that got away is long gone, but in a second chance romance we get to experience that moment through the characters as they try to figure out if a second chance is what they want, and if a second chance is deserved.
Is the second chance appeal in the grovel to make it right or in the do over…or maybe it’s in the way the characters already have a connection, so the story starts on a note of intimacy that other romances don’t have.
Why do you like second chance romances? 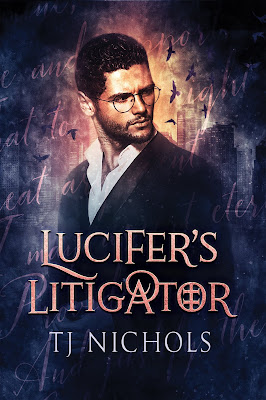 
TJ Nichols is an avid runner and martial arts enthusiast who first started writing as child. Many years later while working as a civil designer, TJ decided to pick up a pen and start writing again. Having grown up reading thrillers and fantasy novels, it’s no surprise that mixing danger and magic comes so easily. Writing urban fantasy allows TJ to bring magic to the every day. TJ is the author of the Studies in Demonology series and the Mytho urban fantasy series.

With one cat acting as a supervisor, TJ has gone from designing roads to building worlds and wouldn’t have it any other way. After traveling all over the world TJ now lives in Perth, Western Australia.

You can find TJ at: