When Aidan Bishop staggers out of the woods, naked and suffering from amnesia, he needs to relearn who he is and where he fits in the world.

His boss, nearly five-hundred-year-old dragon Nassim, head of a successful tech company, hurries to claim his wayward assistant and guide him back into the life he disappeared from. As they get to know each other again, Aidan wonders if their relationship went deeper than employer and employee. But Nassim isn’t telling, and Aidan has a secret of his own… even if he doesn’t know it yet.

My favourite amnesia romances
By Jenn Burke
Amnesia is a tried-and-true plot device for all sorts of entertainment. A ton of TV shows have employed it for tension and “what if” scenarios, like Buffy the Vampire Slayer, Lois & Clark: The New Adventures of Superman, Due South, Full House, and even two episodes of Knight Rider (where Michael and KITT were both affected separately).
In movies, it can be a great overall plot, like in Total Recall, The Bourne Identity, and The Long Kiss Goodnight, or a turned-upside-down element, like in While You Were Sleeping.
It’s even been used in video games—the main character’s loss of memory is a key component of The Knights of the Old Republic and manipulating memories is an ability your character has in Remember Me.
So, yeah. Amnesia in fiction is a thing. And I’m happy to share some of my favourites in a form of entertainment I haven’t mentioned yet—m/m romance books!
Forget I Told You by Tanya Chris
This book starts out with the main character knowing something about his life isn’t right, but he can’t quite put a finger on what. He can’t remember marrying his wife—and suspects he might be gay, a suspicion that’s confirmed when he visits a gay bar and has a scorching encounter with a stranger who seems all too familiar. But what’s the truth?
Okay, first off—that cover. I don’t often gush over covers, but this one fits the story so well, it’s awesome. As for the story itself, I loved the twist Tanya Chris put on this amnesia tale. It was not what I was expecting, but it was great, and it kept me guessing!
An Uncommon Whore by Belinda McBride


Pasha is a slave, and he doesn’t know if he was anything else before. Every time he tries to think of his past, he gets sleepy. So he sticks with the here-and-now, and that means servicing the handsome pirate in the bar. Except the pirate knows exactly who Pasha is—a long-lost king who’s needed on his throne. And his former lover.
This book was recently rereleased, and I need to read the new version! According to the author, some new content has been added. I thought the approach to the amnesia in this story was well done and the stakes are as high as they get.
Fall Hard by JL Merrow
Paul returns to Iceland a year after a fall robbed him of his memories of the past year, including all those about the man who died in the accident—Paul’s lover. As Paul continues his research into Viking lore, he uncovers questions about his last visit, and even more questions about how it ended. And what’s with his attraction to the local named Viggo? Had they known each other before?
This book has the traditional darkness I associate with some of the best amnesia stories (like The Long Kiss Goodnight). The unknown is always frightening, especially when you’re battling your own brain to dig up answers to questions you can’t remember.
Forget Me Not and Remember Me When (The Unforgettable Duet) by Brooke Blaine
Ollie and Reid have been seeing each other every day for weeks at the local convenience store. Finally, they connect…only for paramedics Ollie and Mike to go to the scene of a crash later that day, where Reid’s car is trapped under a truck. After awakening from a medically induced coma, Reid can’t remember the last decade, but he remembers Ollie’s voice, and he wants to know if they can create a future together.
So, be warned…the first book in this duet ends in a gut-wrenching cliffhanger, so you’ll want to treat this like it’s just one book. Trust me. And have tissues handy! 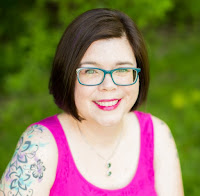 Jenn Burke has loved out-of-this-world romance since she first read about heroes and heroines kicking butt and falling in love as a preteen. Now that she’s an author, she couldn’t be happier to bring adventure, romance, and sexy times to her readers.


She’s been called a pocket-sized and puntastic Canadian on social media, and she’ll happily own that label. Jenn lives just outside of Ottawa, Ontario, with her husband and two kids, plus two dogs named after video game characters…because her geekiness knows no bounds.