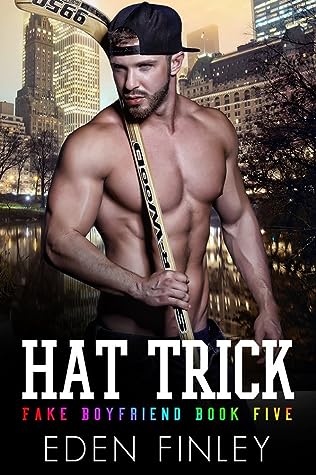 You know what’s not fun? Going on a Fiji vacation with four other couples. Especially when recently single.


Hat Trick is a full-length M/M romance with a guaranteed HEA. This is the final book in the Fake Boyfriend series and as such is not recommended to be read as a standalone. All main characters of the series feature heavily.

Wow, wow, WOW! This story fully earned its place alongside the rest of the books in this amazing series.

And everything that happened during the group's vacation in Fiji, taking Jet and Soren from a place of awkward interactions and hurt feelings to so much more? Gah!


It gave us our defining moment. It was the first time I’d heard Jet’s song the way it was supposed to be heard, the first time I saw how much we had truly affected each other’s lives, and the whole place means so much to me and to us.

I loved not only Jet and Soren, but also how this story covered every single major event (good, bad, and ugly) in their relationship, from their first tentative hookup to their "hashtag real Disney love" HEA.

The guys had a *lot* to overcome along the way, so some parts of the story felt pretty heavy and angst-laden.

His shaggy brown hair is unstyled, his ripped jeans are tight, and the cocky smirk that has haunted me for three years is still the same.

As we lock eyes, I realize I’m wrong.

It’s awkward. The word I’m looking for is awkward.

To help level that seriousness out, though, there was lots of humor from Jet (as if that wouldn't be a given), but the snark & banter, with Soren giving as good as he got, was also extremely high, so color me one happy glamper.

“Gonna move your hand lower or …”

Damn the warm sound of his chuckle.

Soren slides open the screen door. “No. Because then you’ll tell the guys I was jerking off when you came to get me, and then that’ll become a running joke.”

With the nature of Jet's touring and Soren's away game schedule, there was a lot of traveling, but even the longest separations in the book were handled well and I found them tolerable. Not my favorite, of course, but I managed.

We did get one dreaded "Big Misunderstanding", but I was thrilled when Jet's blunt nature didn't let it hang in the air for too long before a timely confrontation resulted in them being even stronger than ever together.

The story did contain Jet's ex-boyfriend, who I surprisingly only hated for the first 75% of the book, but Eden handled that character with poise; otherwise, I'd be bitching like a mad man about now.

I absolutely adored the full and continuous inclusion of all of the previous MC's in this final story of the series, instead of them briefly pulling a Stan Lee-style cameo for two seconds, then going MIA for the remainder of the book.

“All of us against you and Ollie,” Damon says.

I'd rate this story at around 4.5 stars, only coming in behind Damon and Maddox's book, my absolute favorite, and highly recommend the entire series to, well... EVERYONE!