ARC Review: Beauregard And The Beast by Evie Drae 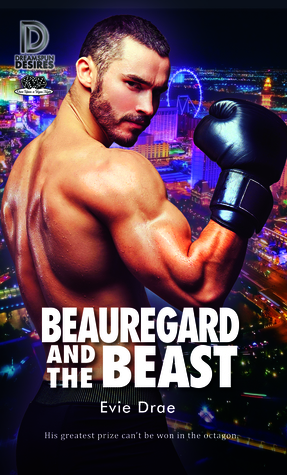 Aware of Adam’s surly reputation, Bo doesn't expect to like his new employer, let alone fall for him. But Bo is pleasantly surprised when a shared love of books leads them to study for their GEDs together and plan for a life after their current careers. Adam won't be able to fight forever, and Bo wants a relationship on equal footing.
But just as their relationship is getting off the ground, the sister Bo raised needs his help, and he drops everything. With Adam’s final match looming and Bo in a different city, reuniting will be the real challenge.

As you probably surmised from the title, this is a retelling to some extent of Beauty and The Beast, in which the beast is not a cursed prince, but a famous MMA fighter named Adam who's been dubbed The Beast because of his performances in the ring, and our beauty's name is Beauregard who goes by Bo and becomes the Beast's new PA.

Adam is only a beast in the ring, and it's a persona he wears in public only. Privately, he's a generous, kind, and somewhat goofy guy, grumpy in the morning BC (before coffee) and hard to raise from sleep. His friend Kyle hires Bo to be Adam's PA, which turns out to be exactly what Adam never knew he needed.

Bo is no pushover, and while he's initially a wee bit intimidated by Adam's reputation as surly and ferocious, he pretty quickly realizes that the beast is in reality a sweet lapdog. And Bo cannot help but fall for Adam.

Adam feels much the same - impressed by the small man who single-handedly challenges and inspires him to reach for something that he's so far only dreamed of having.

There's obviously an opposites attract theme at play, but what I really loved about these characters is that they challenged each other to become better, fit together more easily, find common ground in even mundane things. Of course, there are also grand gestures that fit perfectly with Adam's generous natures and created somewhat humorous moments when Bo is awed by opulence. I loved that the author gave the characters some of the original characteristics - Bo loves to read, Adam's private side being so different than his public persona - but still made them feel like real people and not caricatures.

The romance starts off as a slow burn with some serious UST, but once they give in to the attraction, the fire burns brightly. I will also mention here that the author wrote the steamy scenes with emphasis on the intimacy between the characters. Evie Drae simply blew me away with her carefully chosen words.

I enjoyed the secondary characters also, namely Kyle and Bo's little sister Lulu. Kyle was the instigator - he brought Bo into Adam's life - and Lulu was at once the driving force for Bo taking the job and ultimately the reason for both a near derailment of the romance and them getting their HEA.

This is a really sweet, often funny, and well-told romance between two very different men who are absolutely perfect for each other.