Blogtour: I've Got This by Louisa Masters

Please welcome Louisa Masters on the release day of 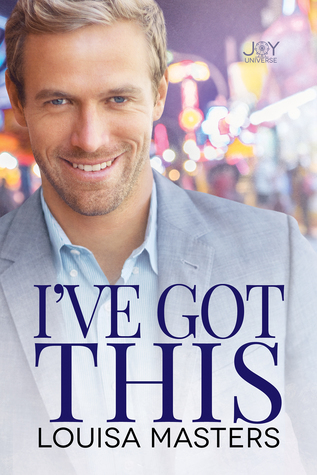 Derek Bryer loves his life. His job as an assistant director at Joy Universe, the second-largest theme park complex on the planet, makes him indirectly responsible for bringing joy (pun intended) to millions of people. So what if none of his relationships are that close? Everyone he meets loves him.

Except Trav Jones. For some reason, the visiting Broadway performer would rather Derek just go away. He appreciates Derek’s work ethic, though, and after Trav steps up when Derek desperately needs someone to fill in for his sick staff, Derek seizes the chance to convince Trav he’s not such a bad guy.

Falling in love while distracted by a murder at the park, food poisoning, and colleagues placing bets on their relationship won’t be easy, but between the two of them and with the magic of Joy Universe, they’ve got this.


I’m just getting back to my room from the resort gym when my phone rings. I answer it quickly, not wanting to wake Kevin, my roommate. Sure, it’s after nine—barely—but when you work in show business, it’s not uncommon to sleep late in the morning. I’m kind of the odd one out that way—I can’t sleep later than seven, no matter what time I go to bed. In my partying days that led to a lot of exhausted mornings.
“Hello?” Caller ID tells me it’s Rick, our producer.
“Trav, good morning. I have a proposition for you. Want to earn some extra cash?”
I raise my eyebrows, even though he can’t see me, and step back out into the hall. Well, it’s actually a covered outdoor walkway. The resort Joy Universe has put us in doesn’t have interior hallways.
“Sure, as long as it’s legal.” There are some things I won’t do, and dancers get a lot of hinky offers.
He laughs. “Completely legal. I know you too well to offer anything even slightly shady. There’s been a salmonella outbreak at a festival on the coast—”
“Yeah, I saw the news headlines.” I’ve had bad sushi before and can commiserate. “But, Rick, gotta be honest, I’m not interested in traveling two hours each way.”
“That’s fine,” he assures me. “You wouldn’t have to. Turns out, a lot of the performers here at Joy Universe went to the festival last night, and now they’re scrambling to find enough people to keep their shows going today at Planet Joy.”
I sit on one of the steps leading down into the perfectly manicured garden. Perform in a hokey stage show probably based on a cartoon aimed at kids? Not exactly my dream job.
“I don’t know, Rick—”


“Look, there’s no obligation—they’ve asked us to spread the word, and that’s what I’m doing. But they’re offering a decent pay packet, lifetime passes to the parks, and the work’s not hard, man. The way it was explained to me, the shows are thirty minutes each and run every hour and a half. They’ve canceled this morning’s shows and have agreed that anyone who helps out will be cut loose in plenty of time for tomorrow night’s shows at Joy Village, so it’s like six hours’ actual performing over thirty hours, plus some rehearsal time this morning. And I’ve been assured that you can have the easiest roles—who knows, you might just have to wear a mushroom costume and do the cancan.”
I laugh, because, come on, mushrooms doing the cancan? That’s funny. “How much are they offering?”
He tells me, and my heart speeds up. Seriously? That’s a nice chunk of change for relatively little work. In fact, I would almost feel guilty accepting that.
No, I wouldn’t.
Yeah, okay, I wouldn’t. And lifetime park passes? Those would make great Christmas gifts for my sister’s family. Joy Universe is not cheap, but they could stay at the campground, or if they want to splash out, at the resort I’m at—it’s supposedly only three-star, but it’s the nicest three-star I’ve ever seen.
I must’ve hesitated too long, because Rick starts talking again.
“Don’t worry about it, Trav; there’s no pressure here. I’m calling through the cast list, but if you see anyone, mention it, yeah? These guys are pretty desperate, and this is their Hail Mary.”
I’m curious. “Why are they so desperate? I mean, it can’t be the end of the world to cancel the shows for a couple days.”
Rick snorts. “That’s what I figure, and so does Toby in events planning who called me, but the guy in charge of the park is adamant. Toby says he’s all about the guests getting what they pay for, and part of that is live shows, blah blah blah.”
Aww. Now that I can get behind. This guy must be a real sweetheart, to prioritize all the potentially disappointed little kids over his bottom line, because the pay he’s offering is going to cost a mint.
“Okay, sure. I can do it. I didn’t have other plans for the day anyway. Might be fun.”
“Really? Great!” Rick sounds surprised, but quickly gives me the details of who to call and tells me they need me ASAP—which I’d kind of guessed. I end the call and head back into my room to wake Kevin before I call this Dimi guy. Kev’s always strapped for cash, so once he’s awake enough to understand what I’m telling him, he’ll jump at this chance.