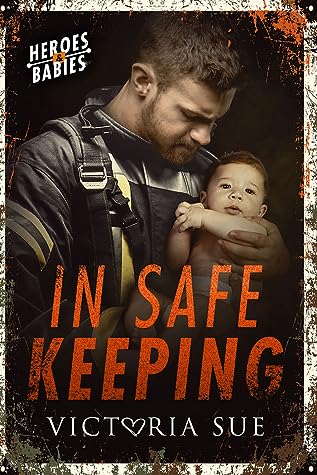 He can’t save everyone…

Firefighter Lucas Attiker is mired in guilt by his inability to save his young son, who perished in a fire three years ago. When he rescues a troubled young man and his baby daughter from a Colorado forest fire, Lucas finally begins to forgive himself. But the wildfire is only the beginning of the dangers facing them.

Hell-bent on saving his daughter from his crime boss ex, Owen Michaels is on the run with the baby in tow—fleeing both the killers who are after him and the US Marshals Service deputies assigned to protect him. When his desperate flight lands them in the midst of an inferno, the man who saves them offers hope for more than just survival.

They might have escaped a blazing forest and a hail of bullets, but both men will need to risk their lives—and their hearts—to give a little girl a loving family… if they can make it out alive.


Lucas knew they had to leave. He didn’t trust Malvetti not to call the station. And if he did, he’d find out Lucas wasn’t there, and that he’d lied.
No, he had to call Jacko. He glanced at his watch. Jacko would be going to the airport and probably wouldn’t be able to get them for at least two hours. He didn’t feel comfortable waiting that long, and there wasn’t anyone else.
He immediately dismissed the thought of the next person who sprung to mind. He didn’t have any family—not anymore.
“What are you thinking?” Owen’s quiet voice focused him.
“I think we have to go tonight.” Owen sat up a little straighter as Lucas explained. “We can’t trust Malvetti not to come back. When he runs out of other options, he may call the station again, and they will say I’m not there.”
Owen frowned.
“He wanted to come in to discuss ‘donations,’” Lucas said, using finger quotes. “I told him I was working. But he challenged it because he knew my schedule.”
“Which would make him suspicious,” Owen agreed.
“But Jacko is on his way to the airport, and his turnaround is going to be at least two hours. I’m just not comfortable waiting that long.” He chewed his lip absently. “I know someone who has a place we can stay, a friend.” He actually knew two people he could drop in on, but he would rather walk over hot coals than ask the second one for anything. “It isn’t far at all, which is good because that means when Jacko gets us something, we’ll be close. At the same time, it’s pretty much deserted, which will give us cover.”
“That’s a lot of we’s in that sentence,” Owen said baldly. It didn’t sound like a question, but Lucas knew it was.
“You need help.” Lucas shrugged. “You don’t have to do everything on your own.”
“I know,” Owen whispered and glanced away. He looked down at Mia. “I should tell you to stay here. I should tell you that my problems aren’t yours. I should tell you that you’ve risked your life enough for us and—”
Lucas chuckled and stood up. “Go get your things. I’ll get together some food and supplies. The whole area is dotted with vacation cabins to the west, and I know my friend’s place will be empty.” He smiled. “We might have to rough it for a few days, but I’m sure Jacko will come up with something.”
“Cabins?”


“Nowhere near the fires,” Lucas confirmed, understanding Owen’s concern.
For a heartbeat, Owen didn’t move. “I’m completely out of cash. I managed to hide a little from the allowance he gave me for Mia and clothes, but it’s gone now.”
Lucas reached out and touched Owen’s arm briefly. “Stop worrying.” But Owen still pressed.
“If anything happened to you, I would never forgive myself.”
“And if anything happened to you, I would feel the same.”
Owen searched Lucas’s gaze. “Because that’s what you do. Save people.”
Lucas met his earnest look. “Not just that.” He waited while he saw the question in Owen’s eyes and wished he’d kept his mouth closed. He was becoming way too invested in Owen and Mia.
“That could be a dangerous habit,” Owen said carefully, as if he was trying to measure his words.
Lucas took a step closer, then hesitated as a small smile played on Owen’s lips. He arched an eyebrow.
“I was thinking how safe you make me feel.” Owen’s eyes widened, as if he’d let the words fall out without meaning to. It certainly wasn’t what Lucas had expected him to say.
Lucas nodded, then turned away to the sink. “Just doing my job.” But it was more than that. He knew it was more than that. He felt a hesitant hand on the back of his shoulder. Lucas turned warily.
“Were you?”
Was I? Lucas didn’t reply, but he saw the flash of something on Owen’s face. “No,” he said in a low voice. “I don’t know,” he admitted.
Owen nodded as if he understood. “Are you bi?” Then he flushed. “I’m sorry, please ignore that totally inappropriate question. I have no filter sometimes.”
Lucas was unable to hide his wince and saw the embarrassment creep over Owen’s face just before he turned to go.
“I don’t know,” Lucas whispered again and waited breathlessly for a reaction. In fact, another two steps farther and Owen wouldn’t have heard him. Owen stilled, then turned. But now wasn’t the time for any of this. “Saying I don’t know isn’t saying I don’t want to be. It’s saying I have some truths to sort out. I won’t lie. I’m drawn to you on a different level. It’s not just me helping someone out, and I’m not sure how to deal with that. You make me feel things I buried a long time ago.”
“It’s hard to trust yourself, especially when you lose something precious.”
Lucas knew, but he didn’t just mean that. He was fighting feelings he hadn’t had for a long time. And for once, this had nothing to do with Tory or Stevie and everything to do with his memories of Niall.
Mia snuffled a little and turned her head into Owen. Owen glanced down. “She used to do that when she was tiny. She’d make this piteous cry and nuzzle my clothes, looking for comfort. I wondered if Mary had ever fed her herself.”
“I think it’s instinctual,” Lucas said. “Stevie used to do the same with me. He’d bawl seconds after he realized I had nothing for him, and I’d have to hand him over to Tory.” Owen nodded and stepped back, and Lucas wondered if it had been the mention of Tory that had made him withdraw. “Friends?”
Owen’s face broke out into a slow smile, the kind that lit up a room. The kind that lit up a heart. “Friends,” Owen confirmed, and Lucas’s phone started ringing.

Victoria Sue fell in love with love stories as a child when she would hide away with her mom’s library books and dream of the dashing hero coming to rescue her from math homework. She never mastered math but never stopped loving her heroes and decided to give them the happy ever afters they fight so hard for. She loves reading and writing about gorgeous boys loving each other the best—and creating a family for them to adore. Thrilled to hear from her readers, she can be found most days lurking on Facebook where she doesn’t need factor 1000 sun-cream to hide her freckles.