In our final post, we'll take a look at two more books, Criminal Pleasures and Seducing Professor Coyle. We also have our author interview and one more chance to win one of Darien's books. 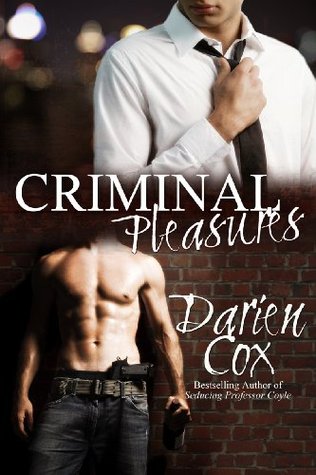 When young attorney Brendan Burke opens his first law practice in a new city, he knows things are about to change in his life—though he never expected one of those things to be getting his first serious crush on another man. But when he meets Marcello, a sexy and mysterious stranger working at a restaurant in Providence’s Little Italy, he can’t fight his compulsion to pursue him.

But while Marcello is willing to let Brendan into his bedroom, he’s stubbornly elusive about his past and his family. Fixated on discovering the truth, Brendan’s passion for Marcello turns out to be far more dangerous than he ever anticipated.


Brendan lifted his ass off the bed, wanting to keep the contact, maintain the ecstasy even as the blast of pleasure ebbed. As Marc’s sweat soaked body collapsed on top of him, he sighed and eased back down.
Brendan struggled to catch his breath. When finally he could speak, he laughed softly. “That,” he said, “was by far the best apology I’ve ever gotten.”
Marc chuckled, his face buried in the side of Brendan’s neck. “Grazie. My pleasure.”
Finally peeling himself off of Brendan, Marc got out of bed and disappeared from the room. Brendan sat up, propping himself on his elbows. His eyes had adjusted and he took in his surroundings. A beam of moonlight shone through one window in the corner, falling onto a sturdy, dark wood dresser. To his right was a double door closet. In the corner, a laundry basket.
He looked up as Marc stepped back into the room. He tossed a towel at Brendan, who caught it. It was warm and wet, and he used it to clean himself up, his eyes locked onto Marc’s naked form across the room as he tugged on a pair of pajama bottoms from the dresser.
Marc turned and faced the bed, his face shadowy, shirtless in white cotton pajama pants with red stripes. The addition of the PJ bottoms did nothing to hamper his striking image. If anything he looked even more alluring than he had completely naked, like a shiny package to be unwrapped. Already Brendan wanted him again.
“You have to leave,” Marc said. “Someone is coming by in the morning and you can’t be here.”
Brendan’s stomach dropped, the hazy euphoria of post orgasmic bliss fleeing like a slapped horse. He ordered himself to remain dignified. He had no right to expect anything from this. He’d wanted to have sex with a stranger. And he had. End of story, apparently. Letting out a long sigh, he sat up, and searched the floor for his clothing. “All right,” he said.
Marc drifted over and sat on the end of the bed, his chin-length hair draping over his eyes as he stared at the floor. “I’m sorry,” he said. “I wish I could ask you to stay.”
Brendan glanced at him as he zipped up his pants. “It’s all right, I understand. Who’s coming over?”
Marc’s head lifted, his pale brown eyes glimmering in the soft moonlight from the window. “My fiancée.”
Brendan froze, his shirt gripped in his hand. “Your what?” 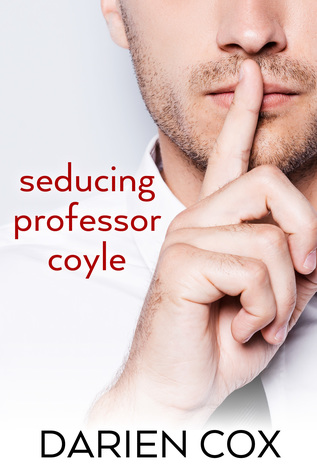 College senior Ben LeClair has always been driven to perfection, so when a grade mix-up threatens to keep him from graduating, he confronts the problem head on.

When he meets with his handsome professor, he finds him to be arrogant and unyielding, and their argument leaves him furious.

But during a chance social engagement over the weekend, he spies his teacher involved in a shocking display of debauchery.

Suddenly, Ben’s feelings for his teacher take an extreme turn, and now his inherent determination is channeled in a new direction: Seducing Professor Coyle.


It had been a few days since his display of weakness with Ben LeClair, and Peter hadn’t heard a word from him. He hadn’t seen him. And that was a good thing. It was also a good thing that no one had come knocking on his office door to fire him, or tell him that a student reported him for inappropriate behavior. While he knew he should be the adult here, and seek Ben out to apologize, he was hoping the problem would simply go away.
You weren’t being the adult when you shoved your tongue down a student’s throat in the woods.
He winced at the memory. How could he have been so stupid, so out of control? Christ, he’d just gotten laid at Thorn’s party, it wasn’t like he hadn’t had it in a while. But Benjamin...the intensity in that kid’s eyes. The desperation in his kiss.
He squeezed his eyes closed. He couldn’t let his mind go there. He should just go home, the day was done, and being on campus only made him think of Benjamin. But being at home sounded lonely. Silly really; he was as alone in this office as he would be at home. And he loved his house. But he’d felt an uncharacteristic emptiness since Thorn’s party. He didn’t want a boyfriend, it had been years since he’d been serious with anyone, and his life had benefited from the lack of emotional chaos. But he craved...something.

You mean someone, and you know damn well who, you nasty old perv.
Letting out a long breath, he turned to his computer, determined to distract himself with grading papers. Since the debacle with Benjamin’s test, he’d started asking students to use the electronic system when turning in work. He didn’t want to go through that again. Benjamin, the sexy little bastard, was right. It was safer having everything online.
It took forever for the page to load. Then once it did, it kept freezing up. “Not again.” He gritted his teeth. He hated computers. “Come on, you piece of shit.” He slammed his hand down on the keyboard, growling.
“They don’t respond well to violence, I’ve found.”
Peter wheeled around in his chair, and saw Ben LeClair. He leaned against the open doorway, arms crossed in front of his chest, absolutely radiant in soft jeans and a baby blue tee shirt, his sandy hair neat and coiffed.
“Benjamin.” Peter glanced around his office as though seeking a means of escape. No windows to climb out of, Petie, you’re trapped like a rat. Resigning himself, he sighed. “Come in. I guess we need to talk.”

It can be anything. An emotion, a song, meeting a new person that intrigues me. Definitely reading and viewing other people’s work, not to take ideas from, but good storytelling just juices me up, it’s invigorating.

I do outline, but like most authors, I don’t really stick to it. It’s just a roadmap for the basic plot and direction of the story, but I’m a real pantser in the sense that the good stuff reveals itself to me along the way. I do always create character profiles to start with, because backstory helps with early development so they’re not one-dimensional.

That’s a really hard question. I think I’d have to say Corey Stengel from the Guys Series. He’s such a wiseass. He’ll say anything that’s on his mind, doesn’t care who he pisses off, and that made him a lot of fun to write. He’s kind of a villain in the first book, so it was fun getting to write his story and dig deeper in the second book, and discover he’s got a lot of really incredible traits, loyalty being a big one.

Can it be a side character? If so, then the father, Harry Cook, in ‘I Saw You First’. He’s an abusive asshole.

Oh geez, I’d probably change a lot of small things, because writers are neurotic overthinkers. But it’s tough to think of anything major plot-wise. I do get reader mail sometimes, and there’s a joke Brendan makes in ‘Criminal Pleasures’ that a few people didn’t get and misinterpreted it to be biphobic, when it was actually intended to be hyperbole for the sake of humor. I guess I might go back and make that more obvious, because if something lacks clarity that’s usually on the author, not the reader.

I am working on two books right now, one which is just about finished, and takes place in a kind of wacky beach town. I realized recently I tend to write stories that take place near a body of water a lot, but decided screw it, I’m just gonna embrace it, because that’s where I like to play. I’m looking forward to getting it tidied up and released, I’m very much in love with the characters and can’t wait to introduce them to my readers.

Thanks for sticking with me and my characters! I so appreciate hearing from readers who were moved by my stories in some way.


Thank you for celebrating this fabulous author with us all month long. We hope you found a few more books for your TBR and learned some cool facts about Darien Cox.