When Beneath the Stain first came out, it was done in serial format, with seven different pieces. I felt sort of bad doing that, and charging for it, even if the complete e-book was part of the package, so I sweetened the deal with 2-10K extras at the end of each installment—and later I consolidated them HERE.

As I was writing the extras—each built around members of the band who didn’t get their perspective told in the original story, I saw certain things emerge that weren’t present in the book by necessity. I’ll let you read the extras—but the two things that mattered for Paint it Black were that

The first one would need some fleshing out—which we see in the opening chapters of Paint it Black. The second one is pretty easy to see. Besides what Blake tells us—about his past, about himself—we see his absolute loyalty to Kell, his decision to be there as long as Kell needs him, even as Kell’s first best friend is dying and needs all his attention.

Blake’s love of his bandmate goes beyond friendship—and as Kell and Briony get closer (which we see in the extras as well) it is so obviously unrequited.

And as Blake redeems himself with nine years of solid family and good works, it seemed obvious—to me, anyway—that there would be parts of this guy, this seeming villain, that would be irreparably damaged.

Cheever thinks he had all the “fun” as he was growing up, and no—his childhood and adolescence weren’t a picnic. But Blake’s got more scars than can be seen by the naked eye.

So when the two of them are thinking of getting together, Cheever has distanced himself from his family—they don’t know him that well. They love him. They want him to get better and recover from his meltdown—but they don’t trust him in the same bone-deep way they trust each other.

And they are afraid for their brother in band.

But we’ve seen it coming since that first serial release. Blake hasn’t just been beaten by life—he’s been tenderized by a meat mallet and was lucky to come out the other side. Imagine Cheever’s surprise to realize that he’s the strong one in the relationship. He’s the one who holds all the cards, when his adolescence had felt so very powerless.

But those of us who’ve been there from the start—we’ve seen it coming all along. 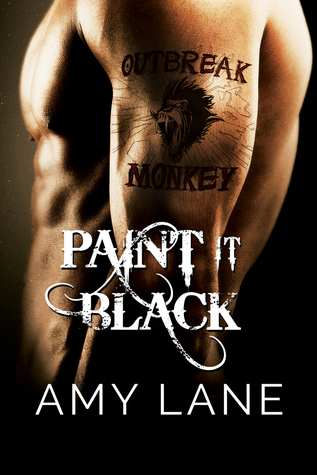 Everybody thinks Mackey Sanders’s Outbreak Monkey is the last coming of Rock ’n’ Roll Jesus, but Cheever Sanders can’t wait to make a name for himself where nobody expects him to fill his famous brothers’ shoes. He’s tired of living in their shadow.

Blake Manning has been one of Outbreak Monkey’s lead guitarists for ten years. He got this gig on luck and love, not talent. So hearing that Cheever is blowing through Outbreak Monkey’s hard-earned money in an epic stretch of partying pisses him off.

Both men have to make peace with being second banana in the public eye. Can they find the magic of coming absolute first with each other?

Amy Lane lives in a crumbling crapmansion with a couple of growing children, a passel of furbabies, and a bemused spouse. She's been nominated for a RITA twice, has won honorable mention for an Indiefab, and has a couple of Rainbow Awards to her name. She also has too damned much yarn, a penchant for action-adventure movies, and a need to know that somewhere in all the pain is a story of Wuv, Twu Wuv, which she continues to believe in to this day! She writes fantasy, urban fantasy, and gay romance--and if you accidentally make eye contact, she'll bore you to tears with why those three genres go together. She'll also tell you that sacrifices, large and small, are worth the urge to write.

You find Amy on her website and her blog.