Hi, and thanks for having me here today. I’m going to share a little information about my latest release, The Doctor’s Orders, available August 20 from Dreamspinner Press and wherever books are sold.
The Doctor’s Orders is book three in the Copper Point: Medical series, the final book in that trilogy. In this installment, we get to know Jared, an openly gay pediatrician, and Nick, the very closeted CEO of the hospital. Though Nick and Jared secretly dated in high school, it was clear nothing was ever going to happen between them again…until Jared and Nick are trapped in an elevator together, where sparks fly.
Nick’s story in The Doctor’s Orders is near to my heart because like him, I too had a late coming out. I actually know a number of people who came out past their thirties and forties, or who are not yet out at all, and now in the US a lot of us do in Presidential candidate Pete Buttigieg. Coming out isn’t easy for everyone, and for some people it’s never possible. With marriage equality the law of the land, sometimes we forget that being one’s true self can still be a struggle.
*
I want to talk about Jared. How I feel about him. How I want to pursue something with him but don’t know how.
It wasn’t the first time he’d nearly come clean with Emmanuella. Not in high school, and not even in college. Sometime in his midtwenties, after his third attempt to date a woman and not being able to accept her invitation to go upstairs because he understood full well how he was cheating her—that’s when he’d started wanting to talk this out with his greatest confidant. He’d been too scared, though. He’d managed to distract himself with work for a long, long time.
What if he’d died without sharing this truth with her? Without living it for himself?
But if he was too exhausted to move, he was absolutely too spent to come out, even to Emmanuella. Soon. He’d tell her soon. “Talk to me about anything.”
“Want to talk about something silly, or do you want to talk about the accident?”
God, he wanted to tell her. It didn’t feel as terrifying right now. Because of the drugs they’d given him? Maybe he should use that. Or maybe he shouldn’t. He couldn’t decide.
*
I actually thought a lot about a good friend of mine from college while writing Nick. He and I spent a lot of breakfasts together, a lot of Sunday nights when were were on our own for supper—we were very close friends in a lot of ways, but it wasn’t until we were in our thirties that he came out to me. I was concerned that I’d somehow made him think it wasn’t okay to tell me, but he said no, his whole focus back then was to marry his work instead of someone he loved. He did well in his career too, until one day when he couldn’t take it one more day. He quit his job, came out, started dating, and was so much happier, brighter, lighter.
This is something we’ve all seen over and over; someone who has been in denial about their orientation is able to push past denial, fear, or whatever is keeping them from acknowledging themselves, and at last they feel at a kind of peace.

I’m a CEO of a hospital. I took out a nest of crooked board members. I can handle an interrogation from my baby sister. Except when Nick opened his mouth, all that came out was, “What do you mean, is it about Jared? Why would you guess that?”

“What it’s about is I’d bet my next paycheck you’ve had a crush on him since you were in high school, and now you were trapped in an elevator with him and you both came out looking at each other like you were Jack and Rose in that car in the Titanic cargo hold.” When Nick felt the blood drain from his face and possibly the entire upper half of his body, his sister threw up her hands. “See? This is what I’m talking about. I’ve been waiting twenty years for you to confess your orientation to me. You think it’s some big mystery, with the way you won’t date anyone? Figured it was just a matter of time until you introduced me to your boyfriend.”
Nick could only stare at her, drowning in his worst nightmare. It didn’t matter that she was reacting positively. The part of him that was always afraid was too keyed up, too busy connecting every potential dot that might bring his world crashing down around him.
Emmanuella, unaware of this, pressed on. “I’m telling you to your face, bro, that I’m for this. Why don’t you come out and tell me about it so you can quit bottling it up inside?”
Nick honestly thought he might be sick. “Does Mama know? Grandma?”
“That you have feelings for Jared? Or that you’re gay?”
Every bone in his body failed him at once, his stomach twisting into a tighter knot. He slumped farther forward.
She put a hand on his back and stroked him in slow, easy circles. “Nick, honey. I’m not trying to make this about me, but for real, I’m hurt you’re reacting like this. You’re not happy that I’m happy for you?”
A rough, hollow laugh escaped him. “Wasn’t ever gonna tell you.”
She smacked him sharply on the shoulder. “Seriously? I just told you—”
“I wasn’t ever going to tell anyone in the family. You’re the last people in the world I could tell.”
“But why?”
His chest was so tight he could barely breathe, his vision blurred by unshed tears as he clenched his hands into fists over his thighs. “Because I could handle anyone in the world rejecting me, but not a single one of you.”
She pulled him tight into her arms, drew his head onto her shoulder. “I would never reject you. Not for anything. Certainly not for you telling me the whole of who you are.”
A small ball of tightness inside of Nick’s chest relaxed, and for a moment they sat quietly as her vow echoed around them and his tears fell softly onto her shirt.

I hope if you’re reading this and you’re one of those people who can’t quite bring themselves to come out, that Nick’s story gives you comfort. If you’re in the process of doing so, let me offer a virtual hug and encourage you along your journey. Whoever you are and whatever your journey, I hope you’re able to live your truth, and I hope you enjoy The Doctor’s Orders. 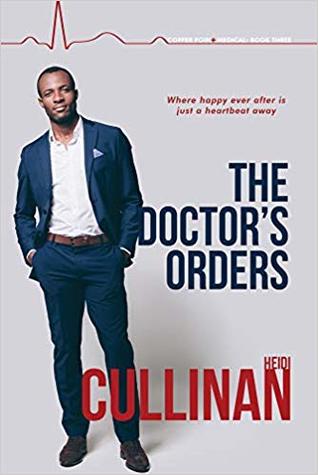 The elevator at St. Ann’s is out of order…but the chemistry between the doctor and CEO is working just fine.

Once upon a time Nicholas Beckert was the boy who stole kisses from Jared Kumpel beneath the bleachers, but now Jared’s a pediatrician and Nick is the hospital CEO who won’t glance his way. Everything changes, however, when they’re stranded alone in a hospital elevator. Ten years of cold shoulders melt away in five hours of close contact, and old passions rekindle into hot flames.

Once out of the elevator, Jared has no intention of letting Nick get away. It’s clear he’s desperate for someone to give him space to let go of the reins, and Jared is happy to oblige. But Jared wants Nick as a lover in a full, open relationship, which is a step further than Nick is willing to go. They’ve traded kisses under the bleachers for liaisons in the boardroom… and it looks like the same arguments that drove them apart in high school might do the same thing now.

Jared’s determined not to let that happen this time around. He won’t order Nick from his shell—he’ll listento what his friend says he needs to feel safe. Maybe this time he can prescribe his lover a happy ever after.

Author of over thirty novels, Midwest-native Heidi Cullinan writes positive-outcome romances for LGBT characters struggling against insurmountable odds because she believes there’s no such thing as too much happy ever after. Heidi is a two-time RITA® finalist and her books have been recommended by Library Journal, USA Today, RT Magazine, and Publisher’s Weekly. When Heidi isn't writing, she enjoys cooking, reading novels and manga, playing with her cats, and watching too much anime. Find out more at heidicullinan.com.