First, I’m honored to be here today, celebrating the release of Fox Hunt, the fourth book in my Shifter U series. Like the other books in this series, these are quirky shifter romances, with heart.

Both David and Buddy have appeared in some of the previous books in the series. We met Buddy briefly (mostly in bear form and in passing) in Stalking Buffalo Bill. Then, in The Night Owl and the Insomniac we get another glimpse of Buddy the protector and mentor. He’s a bit of a contradiction—he’s thrown into violent situations, but is, at heart, a big ol’ softy; he owns a café but doesn’t like coffee; he’s a bit of a loner, but will do anything for him community.

We met David in Chasing Thunderbird. It was his exposé on Simon’s family’s quest to prove the existence of thunderbirds that puts Simon and Ford in the crosshairs of a secret serpent cult. He showed up again in The Night Owl and the Insomniac as Owen’s hacker friend who dug up the intel to shed some light on Yusef’s family heritage.

In these other books, we see David and Buddy through the eyes of other characters—ones who only see the surface of who they are. Buddy is fierce and strong; David is ambitious and clever. In Fox Hunt we get to see their insecurities, and their contradictions.

One of the things I think characterizes a romance is that the characters become better versions of themselves because of their relationship with the love interest. They fill in each other’s voids, so that they are better, more complete together than they ever would be apart. In Fox Hunt, for the first time, David and Buddy have found someone who truly sees them for who they are, beyond the superficial pieces everyone else sees. I particularly love books that allow an insecure, uncertain character finally come into their own, thanks to love. I’m thrilled that I got to do that with Fox Hunt.

Who are some of your favorite couples? How do they complete each other, or make each other better versions of themselves?


Leave your answers in the comments section below for a chance to win of of j. leigh bailey's books! 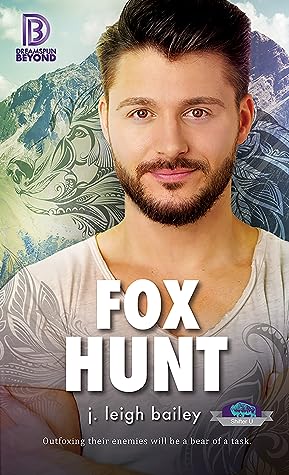 Outfoxing their enemies will be a bear of a task.

Aspiring journalist and fox shifter David ends up with a target on his back after hacking the Moreau Initiative, the shifter world’s greatest enemy. But he won’t let that stop him from the campus tour road trip that’ll help him become the next Anderson Cooper… even if his family insists he travel with a grumpy grizzly bear bodyguard.

Buddy Brady is older, sexy, and too damn distracting for David, and as the sexual tension builds, so does the suspicion around the repeated attacks--first in Chicago, then in New York. Someone is tracking them, and all clues point to a traitor in the shifter ranks. Worst of all, they could be after David’s family....


I double-checked the reminder notes I’d saved to verify the office location. Granted, I had it memorized, but I wasn’t going to leave it to chance.
“Fifth floor,” I told Buddy.
“Stairs or elevator?” He hovered uncomfortably close to me. So close, in fact, that I could feel his body heat emanating from him and I couldn’t take a full step without stepping on his heel.
I pushed against his arm. “A little space, please.”
He didn’t even look at me.
A half-dozen people about my age pushed through the front entrance, chatting and laughing, making enough noise for twice their number. They all looked strangely the same. There was a mix of races and genders represented, but they all seemed to wear the same basic uniform of black dress pants or skirts and colorful button-down shirts. They reminded me a bit of the catering company my mom hired for big events, but more colorful than the black and white. Considering I wore a nearly identical outfit, I worried for a moment that they were all there to interview same as me. The professor wouldn’t do some kind of group interview, would he? Was that a thing? Then I noticed the sign indicating that an undergraduate career fair was being offered.
I tugged at my collar, suddenly wishing I’d worn a tie. It was important to look professional, to make a good impression, but I’d assumed that full suit and tie in the middle of August would be taking it a bit too far. Damn it. Why hadn’t I at least worn a tie? I’d packed one.
Buddy reached over and pulled my hand away from my shirt. “You look fine.” His touch calmed my anxiety in a way I couldn’t quite wrap my head around.
I glared at him, though there wasn’t a lot of heat in it. I wasn’t sure fine was the look I was going for. Especially since Buddy once again looked like he’d stumbled out of bed. His Buddy’s Café T-shirt—he seemed to have an unending supply, all in different colors—was faded and still held the marks of a careless fold and time jammed into a small bag, and his plaid board shorts sported more than one wrinkle.
“Fine?”

“You always look good. You’re freaking perfect. You know that.” He pointed to the sign for the stairway. “There’s too many people. We’ll take the stairs. Maybe the climb will help with nerves.” He spoke casually, absently, like his words hadn’t stopped me dead in my tracks.
Buddy Brady called me perfect. No, scratch that, he’d called me freaking perfect.
Noticing I wasn’t at his side, he turned back. “Coming?”
“Um….” I shook my head. I didn’t have time to dissect perfect. “Yeah.”
He kept his hand at the small of my back, guiding me. I should have found it controlling. I knew where to go, for one. And for another, he was taking the protection detail thing far more seriously than it required. But I didn’t say any of that because I liked having his hand on me. Damn it.
Which reminded me. “You’re still my boyfriend, right?”
He tripped, dropping his hand from my back, and fell forward until his knees hit the marble steps.
“Oh shit!” I reached for his arm as though I was going to help haul him to his feet. Which was ridiculous. Pretty sure I lacked the upper body strength to manhandle someone of his size. Didn’t stop me from grabbing the hem of his T-shirt and tugging. “Are you okay?”
Pushing himself upright, he kicked his right leg experimentally as though shaking away tingles. Or maybe checking to make sure his knee still worked. A red mark was already blooming below the joint. I felt kind of bad. But also intrigued. It was the first time I’d seen Buddy be anything less than graceful. The man did yoga, for crying out loud. He made everything look smooth and oddly elegant.
“Boyfriend?” he asked once he’d ascertained his legs were still in working order.
I raised my eyebrows at him. “That was the plan, right? To explain why I have some dude following me to my interview?”
“Oh, ah, yeah. Boyfriend. Right.”
“I’m still not letting you into the actual interview with me,” I reminded him. We’d agreed to a compromise that wouldn’t humiliate me completely but would keep him close. “You can wait in the hall, or in a waiting room or something.”
He started back up the stairs. We’d passed the landing to the fourth floor when he asked, “You really going to tell them I’m your boyfriend?”
“Only if they question it,” I admitted. “I’m not going to just blurt it out.”
“Good to know.”
“Don’t sound so relieved. We’ve already determined that you’re not concerned about the insinuation that you’re gay.”
“Because I am gay.”
“Right. So why do you care if I tell anyone and everyone we run into that we’re a couple?”
“They’d never believe it.”
Something cracked in my chest, a tiny crack, but one that let hurt and doubt creep in. “Would I make such a bad boyfriend?”
He came to a sudden halt. “What?”
I shrugged, recognizing as I did so that it totally made me look like a pouting toddler. “You seem so disgusted by the idea, like the whole the thought of us—of me—is ridiculous.”
“Is that what you think?” He searched my face. I don’t know what he saw, but his expression softened. “David, that’s not it at all. You have no idea. No one would believe that you would be interested in someone like me.”
“Huh?” Not my most articulate response, but seriously, what?
He shook his head. He was clearly not comfortable—the battle to overcome his reluctance was there for anyone to see. “David, you’re smart, you’re clever, you’re ambitious. You’re gorgeous. You’re always put together. With your face and body, you should be modeling somewhere. No one would believe that you would have anything to do with an overweight college-dropout small-business owner.”
My heart thrummed in my chest, echoing in my brain. Is that really how he saw himself? Is that how he saw me? Both visions were so far from the truth I didn’t know where to start.
My phone beeped, the appointment reminder I’d set in my calendar letting me know it was time to move it if I wanted to get to the professor’s office at the appropriate “fifteen minutes early is really on time” time.
I grabbed his wrist. “I don’t have time right now, but we are so going to talk about how you see yourself.”
By the time we made it to office for the Department of Journalism and Mass Communication, I had my game face on. I had to focus on me, my portfolio, and the school. I had to show this man why I would be a good addition to his school. I didn’t have time to worry about grizzly bear shapeshifters with self-esteem issues. Or the way I really wanted to show him—carnally if necessary—how very wrong he was about his appeal.
Of course, the minute I opened the door and faced the person—a guy in his early twenties—manning the reception desk, I blurted out, “I’m David Sherman. I have a ten o’clock appointment with Dr. Riley. This is my boyfriend. He’ll be waiting here for me. For moral support.”
The receptionist blinked at me.
Buddy gaped at me.
I smiled. It was completely fake and probably more than a little manic.
Damn it.

j. leigh bailey is an office drone by day and the author of Young Adult and New Adult LGBT Romance by night. She can usually be found with her nose in a book or pressed up against her computer monitor. A book-a-day reading habit sometimes gets in the way of... well, everything...but some habits aren't worth breaking. She's been reading romance novels since she was ten years old. The last twenty years or so have not changed her voracious appetite for stories of romance, relationships and achieving that vitally important Happy Ever After. She's a firm believer that everyone, no matter their gender, age, sexual orientation or paranormal affiliation deserves a happy ending. For upcoming releases and appearances information, sign up for her newsletter.

I’ll be giving away a digital copy of the Shifter U novel of your choice
(Stalking Buffalo Bill, Chasing Thunderbird,
The Night Owl and the Insomniac, or Fox Hunt)
to a random commenter! Giveaway will close on July 18.