ARC Review: Out in the Field (Out in College 4) 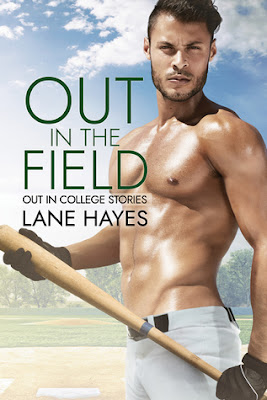 
Max Maldonado loves baseball. He knows playing first base at a private college probably won’t get him to the big leagues, but he doesn’t mind. He loves the game and his teammates. If he has to stay in the closet until he graduates, that’s okay. Baseball comes first. Relationships are complicated anyway. And after his recent messy breakup, Max prefers to keep things simple.

Phoenix Bell is a fabulous theater geek. He’s excited about his recent transfer to a new school with an elite liberal arts program. Life has been on hold for a while, but this opportunity feels like the fresh start he was hoping for when he moved to California. And the chance reunion with the hot closeted jock is an unexpected surprise. The two men have nothing in common and their timing couldn’t be worse. However, when their unconventional alliance blossoms into friendship and perhaps something more, it may be time to make some hard decisions. And perhaps risk it all...out in the field.

How cute is this story, you guys? It's so fucking cute, I can't even.

Masc baseball player who loves eyeliner on his hot not-boyfriend but only talks about video games and baseball because otherwise it's feelings and nope.

Femme drama major/actor who isn't afraid to be all out, including lip gloss and fairy dancing (to be fair, he was channeling Puck).

Max and Phoenix have an arrangement wherein they fuck each other's brains out as often as possible but in secret because REASONS.

Not a spoiler: Max can't (won't) be out, and Phoenix is done with athletes who break his heart.

The MCs absolutely love spending time together, but they're not IN love. Of course not. Because that would complicate things.

The only gripe I have about this opposites-attract, sweet & spicy story is the somewhat incestuous nature of Max's exes. Max is best friends with Christian (who's now with Rory) whom he was with for years. He also just broke up with Sky (a former player on the team), who shows up toward the end of the book wanting to stir up trouble.

(I think Sky is getting his own story. I just know that behind the arsehole facade hides a tortured soul).

A big shout-out to Max's mom and dad for being the BEST. PARENTS. EVER. I also really liked Phoenix's sister, Sunny, and wish we could have seen the two interact more. I missed not having Phoenix's POV.

Out in the Field is a HOMERUN (pun intended; come on, I'm clever like that): a super steamy story with very likable MCs, just a touch of angst, and an awesome HEA. What's not to love?