The Other Book - Amazon US | Amazon UK | Universal Link 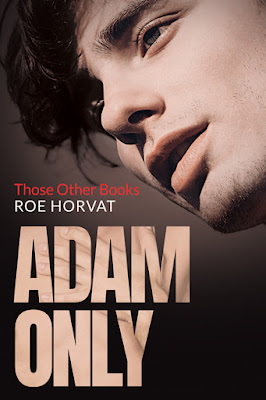 On stage, Adam lets his passion drive him. All his secret desires, everything nasty, dirty, and beautiful flows freely through him, for once in harmony. His soul thrives when his body moves, but only on stage. Adam’s passionate nature makes him a great dancer…and a failure at life. He’s a lonely, emotional mess. Going home with a man far out of his reach is the last thing Adam should do. Christoffer represents everything Adam isn’t: strong, independent, educated, and rich. His kind eyes, at odds with his brutish form, make Adam’s knees and restraint buckle.

Once Christoffer sees Adam dancing, he’s lost. The young man is mesmerizing, otherworldly, and unpredictable. Whatever might happen between them, it will be transient, and Christoffer will most likely get hurt. The temptation is too great, however, and the sex explosive. He might as well enjoy every moment he’s given, even if it’s just one day, maybe two. If Christoffer treads carefully, Adam might stay until Monday.

He didn’t have a clue what he was doing. Why was he still here? He should leave. Now.

The house was far away from any main roads, but he could walk for a bit and then get a taxi to the nearest train station back to the city. Maybe there was a bus stop somewhere close. His thoughts sharpened—the jerking off, swim, and caffeine had cleared his brain. Determined not to waste more time daydreaming about wealthy bears who never gave a damn, he finished his coffee. He’d need to sneak back to the bathroom to get his clothes. And his phone. He shouldn’t have lingered.

He found which cabinet door in the kitchen hid the built-in dishwasher and placed the cup inside. Then he climbed the stairs on tiptoes and peeked into the bedroom. Christoffer slept on his back, snoring softly.

Adam spotted his phone on the nightstand. Christoffer must have put it on charge after Adam had fallen asleep. He wouldn’t dwell on how considerate that was. He snatched up the phone and closed himself in the bathroom.


Eying the red thong with disgust, he threw it in the trash. What had he been thinking? He dragged the jeans up his naked body, pulled on his socks and slid into the T-shirt. His jacket was downstairs. He opened the door carefully, ready to bolt without looking at the sleeping man.

Except Christoffer was now sitting on the edge of the bed, naked, staring up at Adam with sleepy eyes.

“Hi,” Christoffer murmured. His eyes slid up and down Adam’s body, noticing the clothes. His smile turned cautious.

“Hi.” Adam shifted from foot to foot. What now?

The moment dragged on until Adam’s heart was pounding. He needed to say something, quick, and get out of there before it could get any more awkward.

“I…” he began but closed his mouth again. He couldn’t decipher Christoffer’s expression. And all that skin on display was distracting.

Christoffer braced his hands on his knees and inhaled deeply, his Goliathan shoulders lifting. “You like eggs?”

He opened his mouth to say something else, to apologize and whisper goodbye, but Christoffer was faster.

“Good. Wait for me in the kitchen. I just need to…” He gestured to the bathroom door behind Adam’s back.

Adam stepped aside, quivering, and the big man stood in all his naked glory. He bent down and kissed Adam’s cheek, lingering, his breath hot by Adam’s ear. Then he disappeared into the bathroom. “I’ll be just a minute,” he threw over his shoulder before the door snapped shut.

Adam stood there, stunned, and touched his tingling cheek.

Wow! You'll have to give me a minute, I need to recover from the hotness of this book! Ever since I read this author's The Other Book, I've been dying to know how Christoffer and Adam got together. Adam Only did not disappoint. It's hot, sexy, sweet, and delicious.

Christoffer is a successful man, but also a lonely one. He's a relationship kind of guy and since his last relationship ended, he's feeling disillusioned. He's not really interested in casual hookups, either. As soon as he laid eyes on Adam, however, he's up for whatever the lithe, young dancer will give him. I was impressed with the tenderness and understanding Christoffer showed throughout the story and his attentiveness to Adam's needs. Christoffer is a nurturer and it comes through in spades.

Adam is 22 and an amazing dancer. The only time he really feels like himself is when he's dancing. He's also got a huge submissive streak that has gotten him into a couple not so good situations, where he's been taken advantage of and then discarded. Adam longs to be loved and to feel safe letting go. He's always been more attracted to older men, and they've enjoyed playing with him, but before Christoffer, none had actually valued him, so he's understandably skittish.

There's a fair amount of "insta" here. Not insta-love per se, but Christoffer and Adam move fast. You know what, though? I loved every moment. After seeing how beautiful their relationship was in The Other Book, Adam Only gave me everything I needed to enjoy their beginning.

The steam level is high, the connection is tangible, and the ending is a happy one. I definitely recommend Adam Only.