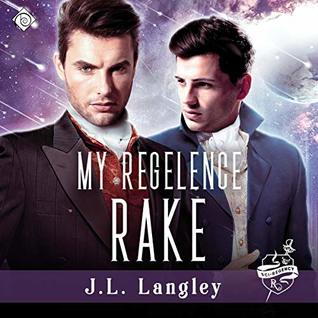 
Before you find your prince, you have to kiss your share of rakes.

With his days occupied with duties as Captain of the Guard, and nights consumed with upholding his reputation as a rake, Lord Sebastian Hastings’s schedule is filled. There’s no extra time to be anyone’s bodyguard, but the royal family’s safety is a task he sees to personally.

While looking over the prospects at an auction, Colton is trying to ignore his sexy, pesky bodyguard when he feels compelled to take on a bully to protect an abused horse. Sebastian is dragged into the fray, and their good deed sparks a string of nasty rumors.

There’s only one way to quell the political storm: marry. But instead of solving everything, Colton realizes his new husband is a bundle of secrets, none of which he’ll give up easily. Unless Colton makes one, last-ditch effort that could break his heart for good.

Have you ever read a Harlequin romance...well me neither, but I remember when I was a kid my mom loved them and so did the mom's of a few of my friends. I had a friend who also loved reading Harlequin romance novels and I remember her reading some of the novels from their regency romance collection and I imagine that those stories bore a strong resemblance to the stories of Ms. Langley's 'Sci-Regency' series and while I still have no interest in Harlequin's regency collection I am unapologetically a fan of this series.

For me each story has consistently gotten better. When I first read 'My Regelence Rake' several years ago I thoroughly enjoyed the game of chase played by Prince Colton and rake extraordinaire...Captain of the Guard, Sebastian Hastings are playing with one another and when it came across my radar that it was on audio well...you guessed it I was all in. Joseph Morton has narrated the first 3 books in this series and so far I've thoroughly enjoyed his narrations and the life he's breathed into these absolutely delightful Sci-fi Romance Adventure stories.

As Captain of the Guard Sebastian is responsible for the safety of the entire royal family and as things move forward in the mystery plot of this series between the planets Regelence, Englor and the IN (Interglactic Navy) the danger to the Regelence's royal family grows but too many questions are remain for anyone to be sure where the next threat will come from and one thing Sebastian knows for sure is that he takes his duties very seriously and none of the royal family will come to harm on his watch but especially not Prince Colton.

I loved the relationship between these two it was nothing if not challenging for both of them but when you throw in a little interference from the royal parents it was also inevitable.

The 'Sci-Regency' series is a light and enjoyable read. These are not the deep and complex plots of many sci-fi stories but stories meant to entertain and capture the readers imagination as the author takes you to new and unusual places such as Regelence and Englor.

Admittedly there are probably a number of inconsistencies and errors in these stories but for me these are stories that I read to enjoy, their what I would call a light read...maybe even a summer read or beach read or in this case a light listen. So when all is said and done if I'm looking to simply enjoy the story why would I go looking for mistakes and inconsistencies; it kind of defeats the purpose doesn't it?