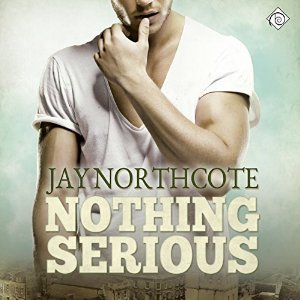 Mark O’Brien is finally being honest with himself. His relationship with Rachel is over and he’s moving out of the home they've shared for six years. They get along, but he can’t fix a relationship when the person he's with is the wrong gender.

Jamie Robertson, one of the removal men, is huge and ridiculously gorgeous, and Mark is smitten at first sight. When a cardboard box splits, revealing items of a personal nature that Mark never wanted anybody to see, he's mortified. But it sparks the start of a beautiful friendship with benefits.

As Jamie initiates Mark into the joys of gay sex, the two men get increasingly close and “nothing serious” turns into something rather important to both of them. But communication isn’t their strong point. Will either man ever find the courage to be honest about his feelings?

'Nothing Serious' is another one of those books that I've read before...actually quite a while ago as in 2013, so when the chance to revisit this one on audio presented itself I decided I wanted to do just that. Unlike 'The Small Things', 'Nothing Serious' didn't quite hit the mark for me but apparently it did work better on audio than when I read it.

Michael Pauley was the narrator for this book and with 300+ books to his credit in various genres he's definitely not a new narrator or even a new to me narrator...this is my seventh audio book narrated by him and while I've enjoyed the previous selections and this one, I have to say it was a little bit of a jolt listening to a story set in England be narrated by someone with a decidedly non-British voice. But since I enjoyed the narration anyways we're not going to count this against anyone and lets just call this one a statement of fact.


For me 'Nothing Serious' was a light and entertaining story and I'm good with that not every book I read needs to be deep and profound. Sometimes I just want to read a book and enjoy the story.

My biggest point of contention here was that I would have liked a little more plot than what I got. Mark and Jaime had a bit of a communication issue and Mark got sick so Jaime went and took care of him. Other than that just add some hot sex and you've got the basic gist of the story.

So yeah, a little more story would have been nice...not a big deep complex plot thank you very much, just a little touch of something more but as it was this one translated to an audio book on a much better level for me and while the e-book was only 2.5 stars I'm going with 3.5 for the audio even without the British accent.