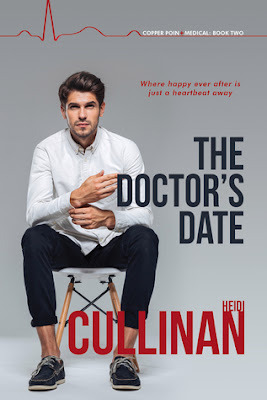 
The hospital’s least eligible bachelor and its aloof administrator hate each other… so why are they pretending to date?

With Erin suddenly heading a messy internal investigation, Owen wants to step up and be the hero Erin’s never had. Too bad Erin would rather spend his energy trying to rescue Owen from the shadows of a past he doesn’t talk about. This relationship may be fake, but the feelings aren’t. Still, what Erin and Owen have won’t last unless they put their respective demons to rest. To do that, they’ll have to do more than work together—they’ll have to trust they can heal each other’s hearts.

Owen loves to push Erin's buttons, and Erin pushes right back. The men have been stepping on each other's toes for two years. It's an intricate dance of love & hate, and it comes to fruition at the hospital "bachelor" auction, where Erin bids 25K for a date with Owen. That's right: twenty-five THOUSAND dollars.

Talk about putting your cards on the table.

Owen initially thinks Erin's just trying to get back at his controlling dad, but Erin's been crushing on Owen since he was 13 years old. The move from pseudo-enemies to friends and pretend-lovers came very quickly, but not as quickly as the leap from fake to real boyfriends.

I wanted more tension, especially because the romance that followed was slightly lackluster. Erin is over 30 and a virgin. Owen is a former player. When the two get together, sparks ... uh, actually, nope, sparks don't fly because there are no sparks. And no steam. And I do mean NONE, unless you count two brief groping scenes.

At one point, Owen plays the violin for Erin. This is a BIG DEAL, as Owen associates the violin with a painful childhood. The guys recreate Valentine's Day. It's all insanely sweet and romantic, and then Owen tugs Erin onto the rug. Erin utters, "I'm not naive any longer." And ... NOTHING. NADA. The scene fades to black.

The fuck you say? Yeah, that's what I said too.

I love Heidi Cullinan, but I don't understand why sex has all of a sudden become something she feels needs to be hidden. The first book wasn't particularly sexy, but the passion is entirely MIA in this one, to the point where I struggled to feel the chemistry between the MCs.

It's really too bad because there's a clear emotional connection between Erin and Owen. They lean on each other. Both have been through hell and back with their abusive fathers. It's hinted at that Erin is on the asexual spectrum (demisexual, perhaps), and that dimension really could have been explored and turned into something sensual and beautiful, but it was barely mentioned at all.

That's not to say I didn't enjoy the story, because I did (I gave it 4 stars after all). I love Cullinan's writing and adored the secondary characters, including Jack and Simon from book 1.

The hospital drama continues with the men discovering inaccuracies in the hospital accounting records. Everyone's sure Erin's dad is involved (and they're not wrong).

And, of course, there's an adorable HEA featuring ogres and music and much, much joy.

I will definitely read the third book. Nick and Jared need their HEA! I'm just crossing my fingers for more steam.

P.S. I would not recommend reading this book as a standalone. The first book sets the stage for the action that unfolds in this one.