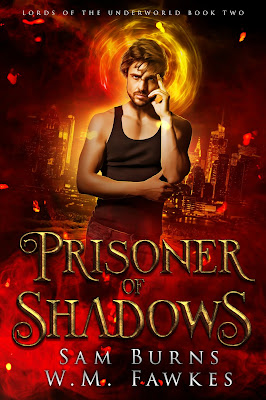 For more than five thousand years, Prometheus has been chained in the underworld. Every day, an eagle tears out his liver. Every night, he heals.

When Hermes releases him in a gambit to save himself from his father’s wrath, Prometheus must adjust to a world that’s forgotten him. Hunted by the twins, Artemis and Apollo, he finds help in an unexpected place.

Julian Bell is a vampire lost. He left his Louisiana home in 1936 and hasn’t settled since. Ten years ago he followed his best friend to New York, but the country they came to wasn’t the America he left.

After losing his friend, he found himself unmoored in a strange land. As he nears his hundredth birthday, he’s realizing how truly alone he is.

When Prometheus and Julian’s paths cross one fateful night, they find in each other a safe path through the shadows.

After reading Prince of Death which entertained me quite a lot (nice world building, good pace, clever twists) despite fantasy not being my favorite trope, I decided to give it a go to this new book in the “Lords of the Underworld” series. Quite a fate as I knew it would feature a vampire, and I don’t like vampire.

Once again, I was taken by surprise (in the best way) by the world building: these authors have a talent for getting their inspiration from Greek mythology and fantasy, taking clever liberties with them, and coming up with a story full of interesting fictional characters, some good plots unraveled at a steady pace, a few pointers on today’s society shortcomings and some nice level of steam.

Prometheus has just escaped his life of non-stop torture sentenced by Zeus and ends up hiding in the streets of “today” New York where Julian, the head of the city’s vampire cops, decides to help him hiding from his hunters and dealing with his feud with Zeus, while also dealing with some coup attempts within the vampire’s community. A lot is going on but not enough to overlook this chemistry between them.


Without being spoilerish, there are a lot of passages I found very entertaining (Prometheus discovering “showers” and credit cards - yep, I can so relate - , the dichotomy between human and Godly fights – yep, a brawl between gods can last 10 years, hehehe), some poignant (Prometheus’s daughter fading for lack of human’s memory and empathy) and other funny (Julian freaking out being 100 yo and Prometheus calling him a baby…after all, Prometheus is xx-thousands yo, LOL).

This is a standalone in this series. A new one is supposed to be released soon, and I surely am curious about what new characters will be featured and what plot these authors will come up with.

For fans (or not-fans like me) of fantasy, Greek mythology and some steamy MM romance (“MM” loosely used though, we are talking about gods, titans, vampires, LOL).


ARC of “Prisoner of Shadows” was generously provided by the author/publisher in exchange for an honest review.